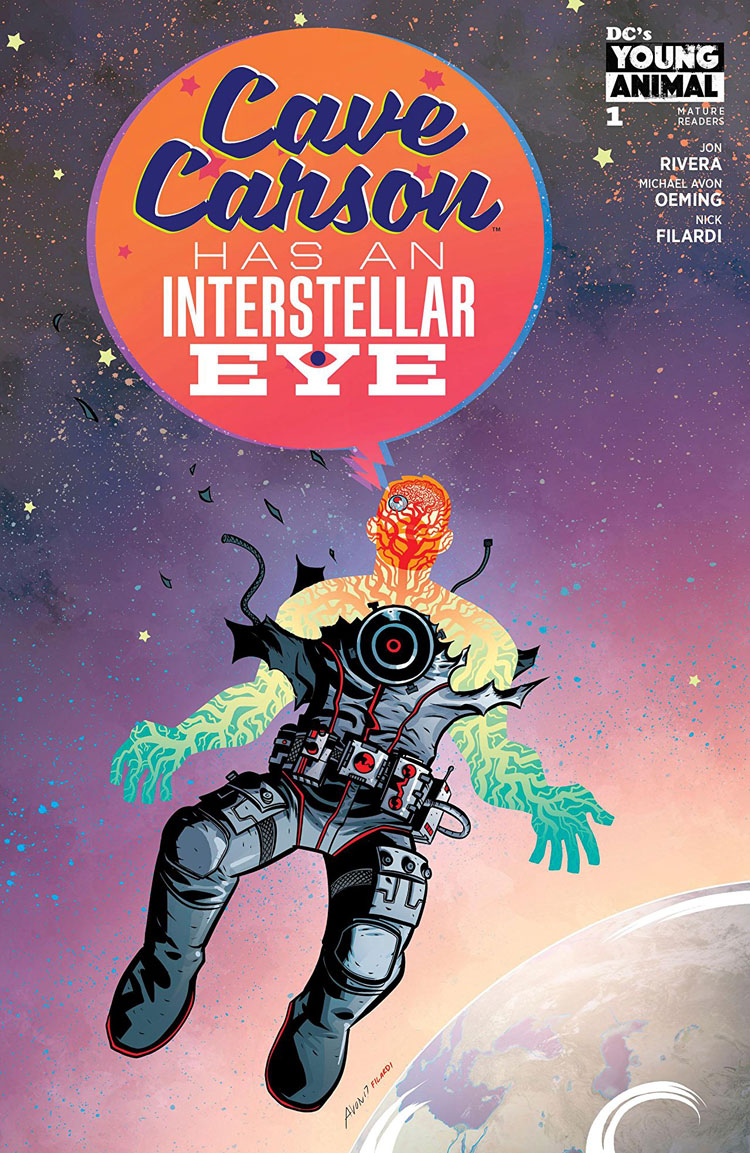 I have to be super honest: I had NO idea what this comic was going to be about when I picked it out of the lineup. I knew it was part of Young Animal, and therefore it would be bright and crazy. And that’s something that I’m beginning to discover that I enjoy in my comics.

But I definitely wasn’t prepared for something quite this grand.

Jon Rivera follows Cave and his team along on a mission to visit Adam Star, a, quite literal giant who is nearing the end of his days and just wants to spend time with his old friends until the end. His friends being Cave Carson, who indeed does have an interstellar, née cybernetic, eye; his daughter Chloe, who is named after a Dog; and another dimension’s Professor Marc Browen.

This Young Animal title, like others, frankly does not disappoint. If you thought the colors and story of Shade: The Changing Woman were trippy — hold onto your seat belt for this issue. Nick Filardi has shed new light on the term “psychedelic feel” and honestly, it ends up being kind of heartwarming. The entire issue takes place in a futuristic world, and then space. And I like to think that even though we don’t know everything about outer space and the worlds beyond it, that it isn’t just dark, and rife with danger. That there are people who implode like stars, and the most brightly colored exhaust stream, as aliens visit planet to planet.

I really like Michael Avon Oeming’s art in this issue. It has a very cartoon-like feel, and was I the only one who was reminded of Prince when they looked at Adam? Music seems to be an underlying theme for all of Young Animal’s lineup, and I really like that.

I’m definitely interested in what happens next. Does Adam get a new body? Does the planet blow up? Does Cave get a new eye? I need answers to these burning questions!