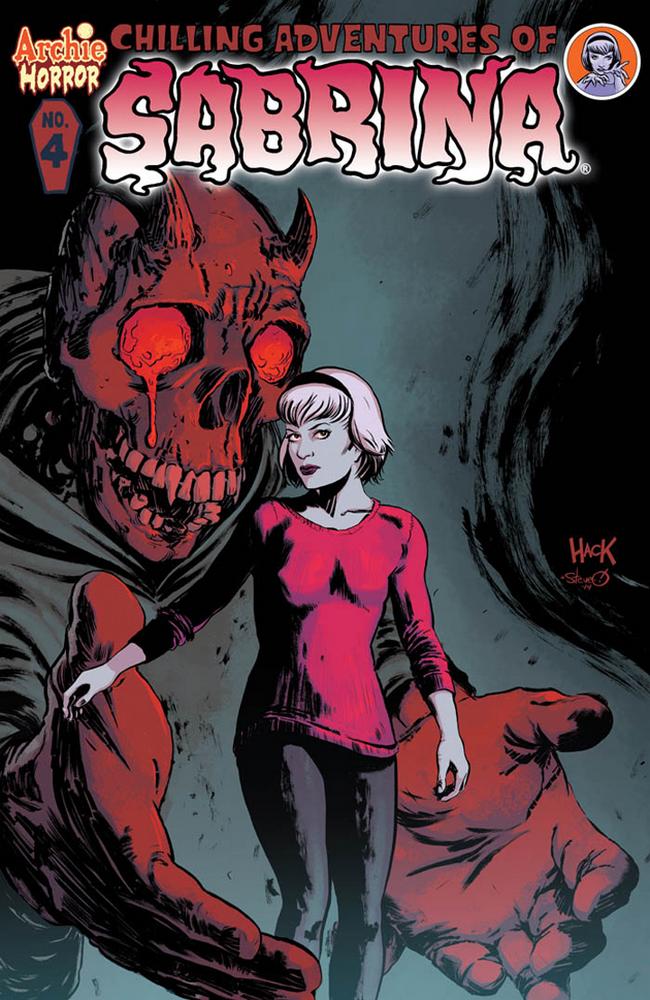 He was just a boy who liked a girl who had a secret. And he paid for his jealousy with his life. Because there was no chance in a million years that Harvey could have predicted that Sabrina Spellman was the novitiate of a clan of deadly, ancient witches in Greendale. How could he know?

It may seem like a cliché for me to say this, but the one word I actually can come up with to adequately describe this chapter of Sabrina is, in fact, chilling. It literally gave me goosebumps to see Hack’s rendition of the witches without their glamour, especially in the moments before Harvey’s demise.

Yes, spoilers. But, c’mon. Harvey wasn’t long for this world the very moment Madame Satan got him in her clutches. And that’s the scariest bit. For all the horror that is summoning the Devil himself to the forest to preside over a black baptism, none of it would have cost a life if not for the villainess’s temptations. Except in the sense that Sabrina would have become what we now discover her aunts to be.

And that is more chilling than every other lurid part of this book combined.

Hack’s illustration — from pencils and finishes all the way to colors — is so moody and controlled, which in many other circumstances might feel stiff. But here, where we are meant to feel a great sense of terror and power that lies just under the surface, held back by sheer force of will, any awkwardness gives way to adding a sense of welcome dread.

Aguirre-Sacasa continues adeptly blending classic horror genre tropes with classic Archie Comics characters to give us one of the most unnerving books I’ve read in years. It’s one thing to take Sabrina (who, frankly, is the least changed of all) and drop her into a desperate nightmare. It’s another thing what’s happened to Betty and Veronica.

Oh yes. That may be the second most lurid part of the book.

The tension the writer develops throughout the issue, particularly in contrasting Sabrina’s upset with her aunts’ cool and calm collectedness — a matter-of-factness about the most dastardly of acts — is just so compelling. It’s hard to shake, honestly, just how creepy the reveals are. And just when you think you’ve had enough, Aguirre-Sacasa hits you with a moment so emotional with Harvey’s mother that it’s a wonder we’re all not on the bathroom floor with Sabrina.

A series long in the making and worth every single moment put into it — by reader and creative team — Chilling Adventures of Sabrina is a class act in horror and is outright gorgeous in its macabre presentation. Archie has a serious masterpiece on its hands. Let’s hope our hearts are strong enough to take it.