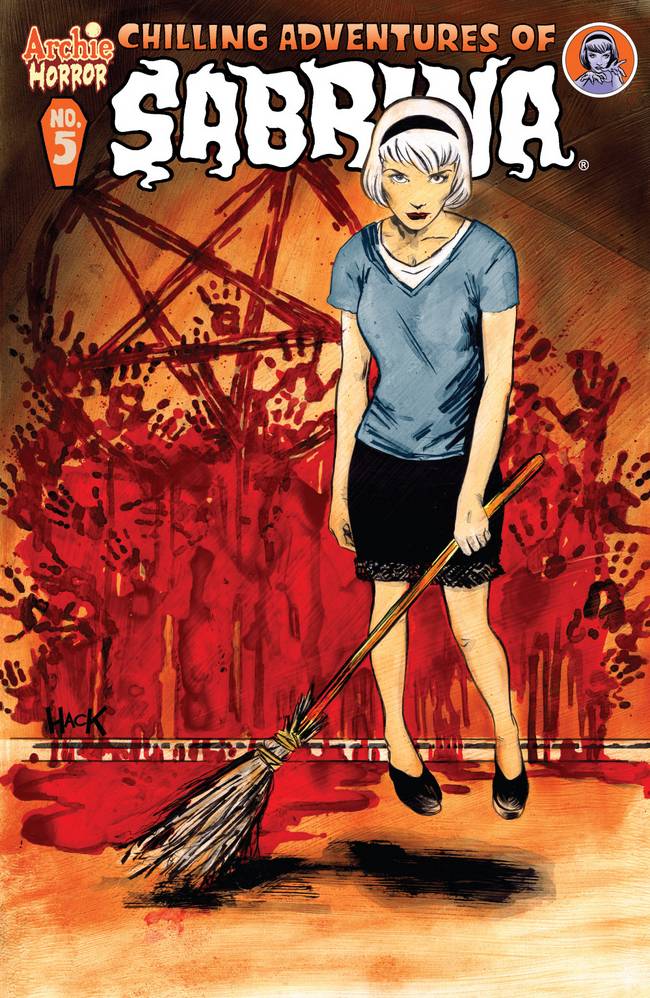 Chilling Adventures of Sabrina is back and even though it has been 10 long months since issue 4 hit the stands, issue 5 dives straight in and picks up where we left off. Which is, for those of you who skipped the recap page, with Harvey Kinkle dead, Ms. Porter aka Madame Satan aka Sabrina’s father’s ex is up to all kinds of no good, Betty and Veronica are still playing witch, and Sabrina is in a whole heap of trouble.

Moving between Greendale and Riverdale, and the past and the present, the first half of issue #5 tracks the progress of Sabrina’s trial by the Church of the Night alongside that of her father 16 years earlier, while the second half, focuses on the deal Sabrina has made with Ms. Porter and its consequences. While it’s fair to say that a lot happens in this issues, Roberto Aguirre-Sacasa is careful to tie the various aspects of the narrative together so as not to effect the pacing.

What stood out and still feels a little jarring was the way in which Veronica broaches the subject of racism. Betty quickly shuts it down, derailing Nancy, the only visible person of colour in the book, and likens it to the treatment of witches in the town. Nancy retorts that unlike black people, witches aren’t real but quickly excuses herself to attend a church group and does not make another appearance in the issue. Treating people of colour, and specifically Black women, this way is maybe indicative of small town USA in the 1960s but it is also true of current media trends which erase all those who do not adhere to a very specific, very white mold. While it could be argued that the language used regarding Sabrina’s father’s trial, and his marriage to a mortal can be considered an analogy for racism, it is far from the same thing.

Reminiscent of 1960’s horror movie posters in both composition and colour, Robert Hack’s loose lines and limited but rich palette create a palpable and creeping sense of dread that runs throughout the book. While Hack does not evoke a great sense of movement with his work, there is an eeriness to be found in the expressive eyes and somewhat static facial expressions, especially Sabrina’s as she goes from emotionless to butter wouldn’t melt as her trial progresses.

Fans of Chilling Adventures of Sabrina will be glad of its long awaited return and the pace with which it picks up the story. Aguirre-Sacasa and Hack continue to create a book that plays horror against teenage angst in a way that feels unique and does not merely result in a slasher story. Well written and masterfully illustrated, Chilling Adventures of Sabrina #5 was well worth the wait.