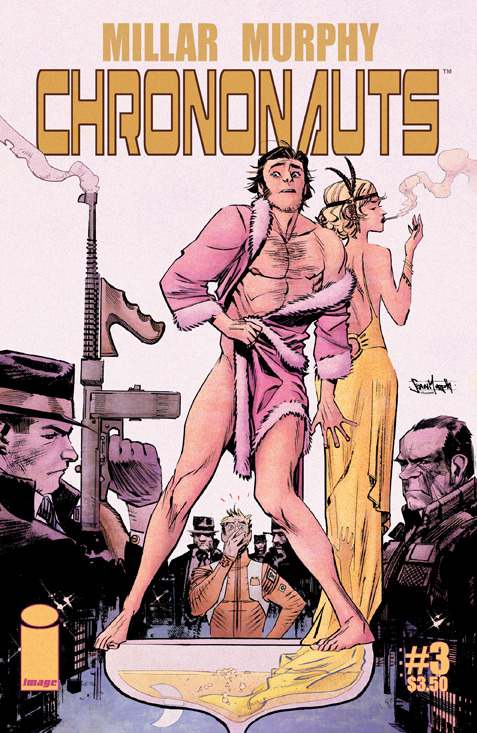 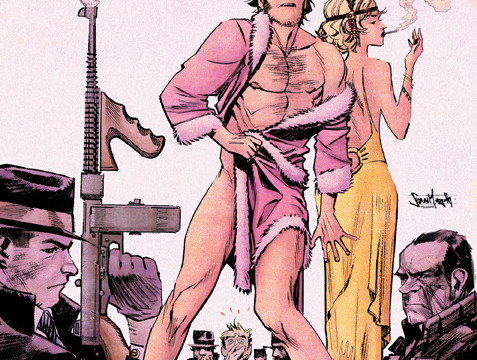 There are a ton of comics out there where time travel is a huge component and each of them drive home that there are very important rules for the sanctity of the time stream. Mark Millar and Sean Gordon Murphy have a very firm message with Chrononauts: f*** the rules.

…and it works. Mark Millar’s dialogue and script are a hoot, and these two storytellers work very well together. This issue is big on action and Murphy’s work is pure magic when he cuts loose. Chrononauts is two wild guys ripping their way through time in a sports car and it’s a riot. This comic is just pure fun. It is over the top and has a ton of violence in it, but Murphy frames it in a way that is not gratuitous. These two storytellers are on the same page, which is obvious in this issue as Millar’s dialogue and Murphy’s artwork click together perfectly. One might argue there’s more flash than substance here, but the ongoing narrative about this dynamic duo is really grabbing me. The fact that anything goes is also something that gives this issue a huge amount of life.

Murphy’s artwork is like lightning on the page, dynamic, fluid and explosive. Several pages are show stoppers and this issue (and series as a whole) are a great example of what can happen when creators are on the same page…especially if one is as talented as Sean Gordon Murphy. Chrononauts #3 is as visually wild as you’re going to find in stores tomorrow and I mean that in a good way. The visuals are worth the price of admission alone and the story keeps up with them.

Chrononauts #3 is a wild thrill-ride that takes everything you’re used to in a time travel story and blows it up. Millar and Murphy aren’t holding back when it comes to a crazy tale and the energy they fill this story with is impressive. Chrononauts is just crazy fun and that’s something I can always use more of. Millar and Murphy have got a winner here.