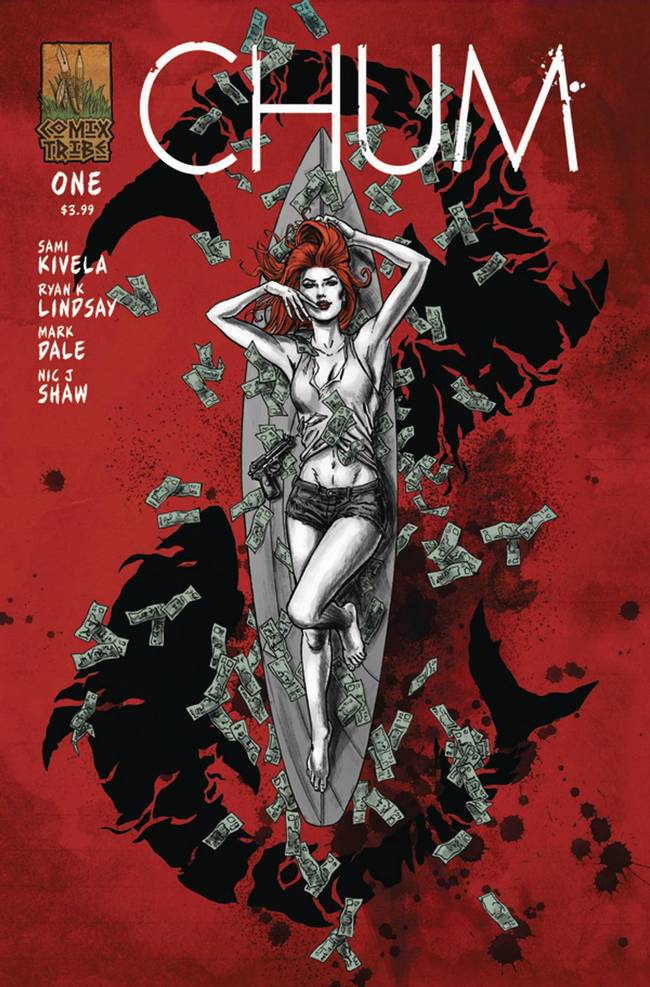 The island life is so pleasant, right? The soft breeze, the crunchy sand, the gently churning waves…the murder. Chum #1 takes everything you know about down and dirty noir and places it right in a pristine beach-side setting. Writer Ryan K. Lindsay and artist Sami Kivela, with Mark Dale on art and Nic J. Shaw on letters take you on a private tour of surf-gone-rough in this new series from ComixTribe. I may not like pina colada’s, but I do love this first issue.

The island’s gone stir crazy. When Summer, a bartender at the local waterhole recognizes a way out of her less than satisfying life, she attempts to take it. How? By getting the people around her to help her out. She’s embroiled with the local crime boss who has…less than orthodox ways of handling those who double-cross him. His traitors swim with the fishes, so to speak, or at least what’s left of them. By issue’s end, Summer has created a twisted web of bad tidings, involving the local detective, a reporter who has as much perseverance as she does sass, and the local crime element in what will surely be a twisty-turny three-issue tale.

From the first few pages, I was hooked. Lindsay’s introduction to the main players on the island is one of the most beautiful things I’ve read in a long while. He compares each of the characters to parts of the beach, and the result is extremely fulfilling. From there, the writing stays strong. The dialogue feels natural and compelling, the attitude and personality of the characters is instantly recognizable. While it’s the setting that makes this narrative original, the story is still intriguing enough to make me want more. I like that Summer seems able to fend for herself, and I have high hopes for her as an anti-hero of sorts. I imagine the action over the next two issues will run rampant, and I can hardly wait for what’s in store.

Sami Kivela nailed it on art. You can practically feel the sand beneath your feet and the scenery is postcard gorgeous. What he absolutely kills on this book is complementing the shiny exterior of the vacation locale with an overwhelming sense of dread. The environment might be pretty, but the people are visibly consumed by their ill-intentions. Emotion lines are wrought on their faces: guilt, trauma, fear…it’s all undeniably visceral. Mark Dale’s colors give this a pleasantly consistent finish, perfectly churning out the blood-red dread aesthetic this book captures. Nic J. Shaw’s letters this book with grace, making the hard-hitting noir statements extra punchy.

Overall, this is the kind of book I look forward to with bated breath. At the end of the day, the ideas of villains and heroes are complicated, and that’s the kind of thing I love to work out in a series. Naysayer of this comic? Feed ’em to the sharks.