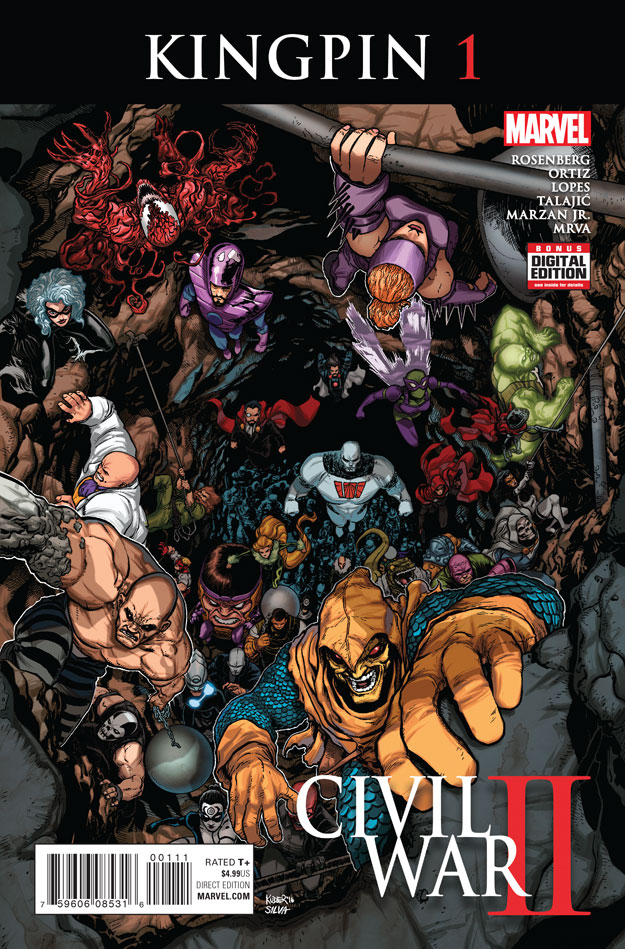 Grim and gritty, Civil War II: Kingpin #1 reaches into the underbelly of Manhattan in the Marvel Universe. Writer Matthew Rosenberg and artist Ricardo Lopez Ortiz use the first three pages of the issue to bring readers up to speed on the goings-on in the main Civil War II title, while also setting the mood for this story as Wilson Fisk gathers former and would-be allies, hoping to leverage their number and resources to their benefit while the heroes bicker amongst themselves.

Playing upon the heroes’ leveraging information from the precognitive Inhuman, Ulysses (see Civil War II for deeper detail), Captain America, Spectrum, and Night Thrasher as well as Hawkeye show up to harass Fisk. Their evidence and rationale is slim at best, and Rosenberg writes their confrontations with Fisk as flocks of playground bullies volleying empty threats at one another. The end result is a lack of tension, as neither side seems worth rooting for.

Ortiz’s art is loose and rough, well-suited for a noir tale, but at times overly gestural and somewhat incomplete. His storytelling could be tighter as well. Bushwacker’s first panel does nothing to identify the character in question, and, given the positioning relative to Fisk’s gathering, readers might even be left thinking Bushwacker is Jigsaw. Later on, after Bushwacker has taken a blow to the face, Ortiz mixes up the sides of Bushwacker’s face that should have been impacted and we’re shown a man with a swollen black right eye after being struck on the left side of his face.

Colorist Mat Lopes does a nice job keeping the colors thematic to the tale, dabbing the scene with greens to play in contrast to the purples and magentas that frequent the tale and draw upon the hues historically associated with the Kingpin as Fisk struggles to find footing and snatch power. Honestly, though, the lead story in Civil War II: Kingpin #1 would be fine without color, and, with a little refinement in Ortiz’s drawings, could be much more impactful in grayscale, as the grays would be symbolic of the murky atmosphere of this tale and Manhattan in a broader sense. Letterer Travis Lanham faces no such challenges, giving Wilson Fisk dialog caption boxes that exude treachery and ill intent. Everyone else is normal as can be, but Lanham’s lettering makes it clear Fisk should (and does) stand out.

Towards the end of the first tale, Rosenberg shifts gears and turns the wheel hard, trying to give Fisk a shot at redemption or, at least, interest from the readers. Even that opportunity is undermined by Fisk acting more like a common lowlife thug than a criminal mastermind.

The backup tale gives readers some background on Fisk’s new right-hand man, Janus Jardeesh. Also written by Rosenberg, this tale has a little more range, as it is less a tale of redemption and more exposition and explanation. Jardeesh is not likeable, nor does Rosenberg try to appeal to the reader in any way. Instead, Rosenberg uses this story to add depth and construct history, providing a behind-the-scenes explanation for Fisk’s concern in the lead tale of Civil War II: Kingpin #1. The end of this story spirals back to the lead tale; giving readers everything they need to know going forward.

Dalibor Talajic and Jose Marzan, Jr. turn in cleaner art that is less sketchy, and more traditional. Their storytelling benefits from the cleaner style, and when Miroslav Mrva amplifies the saturation in the story’s colors, it is for dramatic effect that hits the mark, propelling a street-level tale into uncomfortably cosmic regions. The general appearance of Jardeesh translates across the two tales, but the detail of the character is wildly variable from lead to back-up story.

Fisk’s attitude overreaches his station, but rather than come across as confidence, it reads like arrogance. There’s no humility in this version of Wilson Fisk. That lack of humility keeps him from being a relatable character and keeps Civil War II: Kingpin #1 from being an immersive read. This is the type of comic fans read to hope to see bad things happening to bad people. It’s not particularly eventful, nor is it particularly memorable, but it does point readers in a direction that has potential. I just hope Wilson Fisk lives up to that potential.