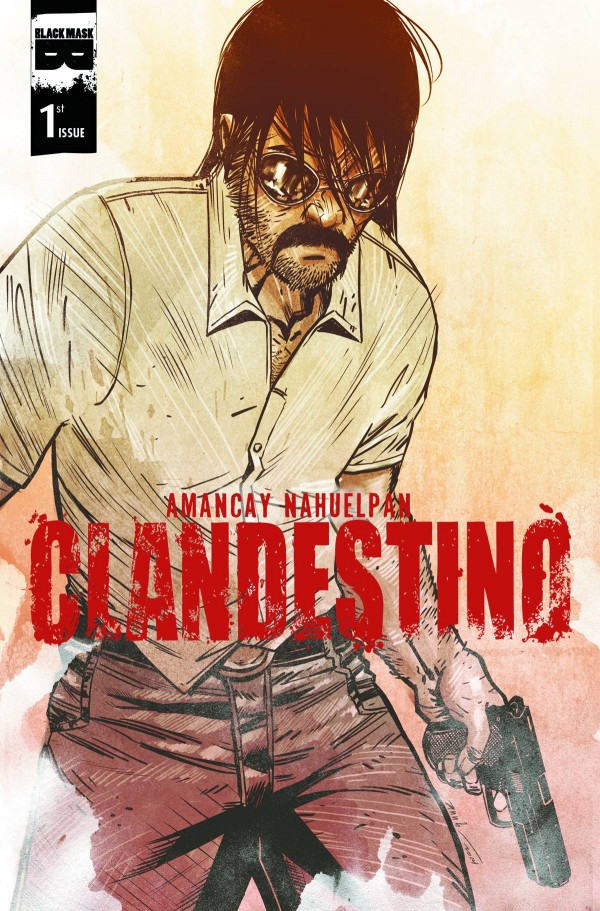 Several warring factions, one warring territory, one man…one more Black Mask title completely worth your time. This week, Clandestino #1 released, a much anticipated title on my end. Amancay Nahuelpan blew my mind with his insanely talented work on Young Terrorists #1, and since then, I couldn’t wait to have a new series not only illustrated by him, but written as well. After reading the short essay in the back by Nahuelpan, I appreciate this even more than before. What I had in my hands this Wednesday morning was the culmination of seven years of work, with every facet of the book in Nahuelpan’s control.

Enter Clandestino #1. This book follows man-of-few-words badass extraordinaire, Clandestino, who was taken in as a child by the Koyam freedom fighters. The Republic of Tairona is in disarray following a para-militaristic takeover, and it’s up to Clandestino and the Koyam to bring the country back to order. This first issue showcases Clandestino’s many talents, including throwing a gun into someone’s eye and having it stick, as well as introduces the war-torn Tairona territory and the organizations at each others’ throats. By issue’s end, Clandestino has a more personal reason to eradicate General Kapala’s forces.

Clandestino #1 is certainly one of the more unique books on the stands today. It tells the story of the Republic of Tairona through the plights of the titular character through a wide variety of media. Nahuelpan blends a couple of different art styles and infuses segments of the story with newspaper images that give more depth to the background of Tairona. By providing a variety of story-telling tools, Nahuelapan keeps things fresh and interesting as the story progresses. For those that may not want to take the time to read the longer newspaper articles, the world is certainly fleshed out enough on its own through the sequential side of the story-telling.

Nahuelpan began producing this story seven years ago, and it will be interesting to see how his art and style changes over time once we reach the final issue. However, even with this first issue and some of his earliest work, his art is finely honed and incredible to behold. Hands down, Nahuelpan produces some of the most brutal fight scenes I’ve ever had the pleasure of watching unfold. If you enjoyed the grit and sheer violence of Young Terrorists, you’re going to get a lot of the same talent here. The movement is frenzied, but easy to follow. The fast-paced action is truly beautiful to see spread out across the page. The characters are easily discernible and followable even with the fists and blood flying.

One thing I really enjoyed about the art in this issue was how different the various stages of Clandestino’s life looked in terms of the artistic portrayal. The governmental coup that sets up the war for the story is depicted largely black and white, semi-noir style. The first few pages that include the epic fight scene between Clandestino and some ruffians is bright and colorful, detailed and kinetic. The latter parts of the story that portray Clandestino growing up and training, as well as his current predicament are a blend of these two styles. This visual feast keeps things fresh as the pages turn, and is certainly worthy of a round of applause in the skill it displays.

The writing in this book is a little stiff at times, but its overall entertaining and thoughtful. There are plenty of layers of story and character here to peel back, and with this incredible art, I can’t wait to do so. Nahuelpan has created an interesting character in Clandestino and a nuanced world with the Republic of Tairona. This issue is well-paced and an exciting introductory installment.

Grab this book while you can. If you don’t get your hands on a copy soon, chances are you may not get another go of it, barring a second printing. Clandestino is masterfully illustrated with a compelling story. Grab hold and don’t let go for Nahuelpan’s wild ride.