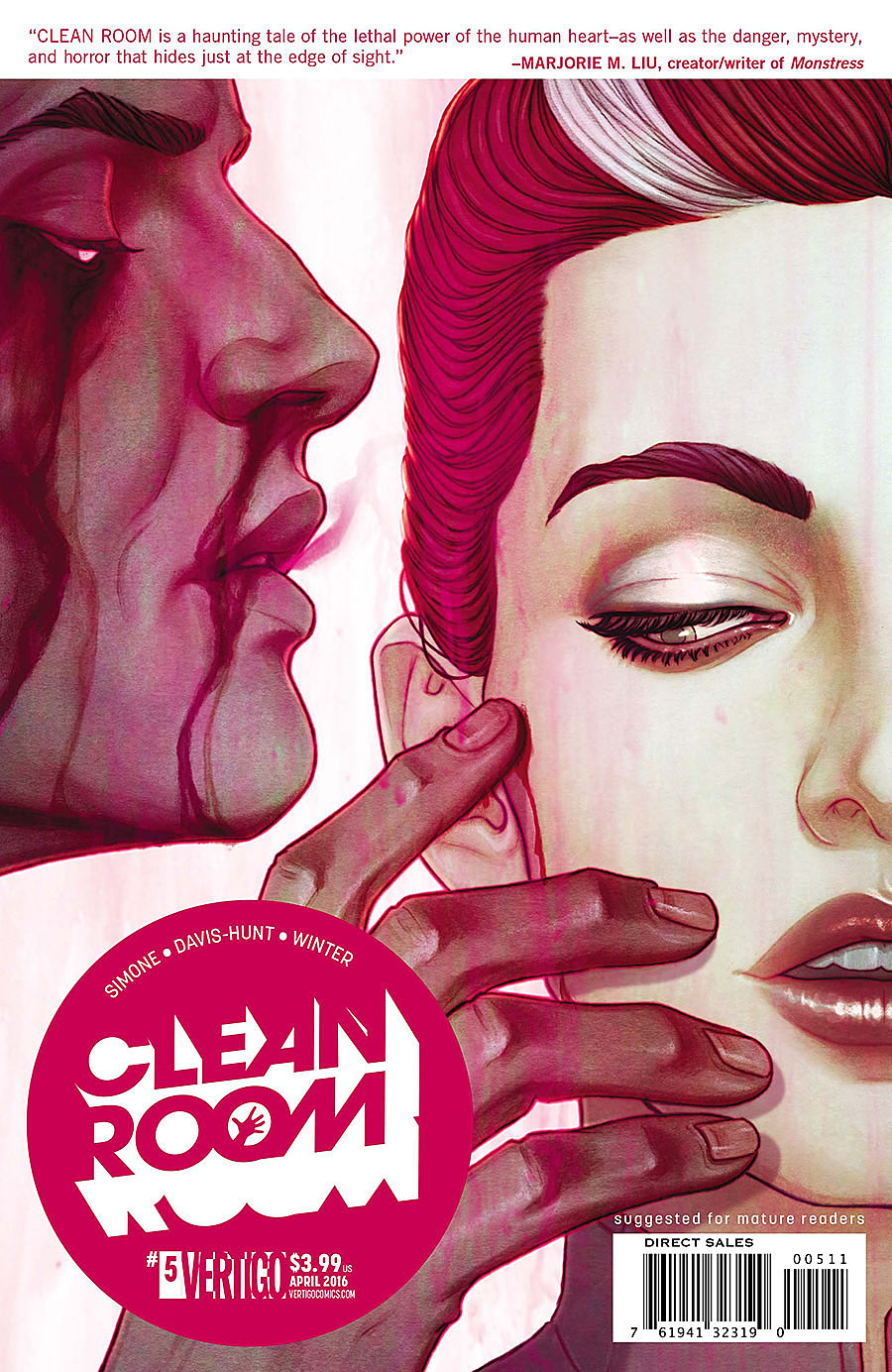 Imagine you’re casually driving down the road with a good friend, and your friend is telling you all about their recent trip to Europe. They regale you with bits of local color, explaining how the laws around hash bars in Holland work. The scenario starts to feel oddly familiar, deja vu beings creeping in until they say “It’s the little differences,” and everything clicks into place. You’ve heard this all before, you think. But they don’t ask you about a cheeseburger.

“Do you know what they call an orgasm in France?” they ask instead.

No, you reply, feeling suddenly clammy.

“La Petite Mort,” they say with a smile, “the little death.”

There’s a heroic underdog trying to unravel a conspiracy that has something to do with a reclusive fiction writer running a cult-like self-help organization whose influence runs deep in celebrity circles. It sounds comfortably familiar for long-time Vertigo readers, or even relative greenhorns who picked up the first issue of Effigy this time last year. But as we’ve come to discover over the last four issues, Gail Simone and Jon Davis-Hunt have used that presumption of familiarity to pull the rug out from under us. Up is down! Angels squirm in the soil beneath our feet and demons hover above our heads! Life sucks and death is seductive! Welcome to Clean Room, where everything is exactly what it appears to be until it isn’t.

This issue opens with Astrid Mueller, the ginger author at the center of the conspiracy locked in her hermetically sealed Clean Room with a trigger happy subordinate who’s just shot a client possessed by a demon claiming to be responsible for nearly killing Mueller as a child in Germany. If you’re thinking, ah yes, a Vertigo comic with a ginger anti-hero in a confined space and “I’m not locked in here with you, you’re locked in here with me,” comes to mind, then — well, yes, this is one of the few situations that things really are as they appear. The demon worms its way into her subordinate’s mind intent on terrorizing Mueller, only for her to wrest control of the situation out of its hands in a chilling game of psychological chess.

Over the last couple issues, we’ve come to learn that Astrid hand-chooses subordinates that she refers to as rooks, just about as high of an honor as she can bestow. The poor soul inhabited by the demon is one such rook, and Astrid tells him that she doesn’t choose her rooks because they are impervious to things like possession. It’s because she knows how to manipulate them in case it happens. She has cards kept on hand that serve as memetic triggers to remind her of a particular traumatic memory of the rook’s that she can exploit for leverage.

Superhero comics love intertwining kink and psychoanalysis, but before you grumble “pervert suits,” to yourself and draw the wrong conclusion, these ideas proliferate across the entire medium! It’s barely a hop, skip, and a jump to go from Marston’s wild ideas about loving submission to R. Crumb’s naked fetish for large, powerful women who make him feel small.

Before Grant Morrison upgraded Emma Frost’s corset and cape to shiny vinyl, he built the cosmology of The Invisibles up from Wilhelm Reich’s conception of biological energy released by orgasm, stitched it to the postmodern occult conception of gnosis, and wrapped the whole thing in a bow of vegan leather bondage gear. Years before Brian K. Vaughn kicked up a ruckus over breastfeeding in comics with Fiona Staples, he used bondage play as a key part of a primal therapy session in Y: The Last Man. It’s almost enough to lead one to conclude that the actual comics page is just the crustless bread slices that smush together the peanut butter and jelly we’re all really here for.

There’s more than one game being played though, as Astrid’s coded chess language seems to imply. We know that she has an inner circle of rooks that she can mentally turn inside out, but when Chloe, our real hero, paid her first visit to Mueller’s Chicago headquarters, she found a chessboard set up for a game of fairy chess and had an inverted rook Mueller referred to as a “wazir” pressed into her hand. We may have been given a front row seat to what a rook is to Mueller, but the place of the wazir remains cloaked in mystery as Astrid and Chloe vie for domination.

While Mueller is otherwise occupied this issue, Chloe is visited by a demon sent to make her kill herself, but it admits to her that it can’t bring itself to do it in a childlike voice that recalls the eerie mix of innocence and sadism Simone imbued Ragdoll with in the pages of Secret Six. As Chloe puzzles through this latest twist and finds something called The Surgeon on her doorstep, a third plot thread that highlights Jon Davis-Hunt’s visual storytelling emerges.

With all hands on deck trying to extricate Astrid from her precarious situation in the Clean Room, her second in command Killian dispatches someone called Capone to deal with the aftermath of their most famous client killing himself when basic media spin proves to be ineffective in stopping a wave of his peers pulling back from their organization. At this point, the usual dynamics, and even their obvious inversions have been meddled with so much that the implied image of the legendary Chicago gangster could mean everything or nothing. The answer appears to be both. Capone is a slender woman who employs seduction as her primary means of persuasion, but she wields that weapon about as bluntly and flagrantly as her namesake did brutal violence and there’s every indication that she’s probably broken at least as many hearts as the St. Valentine’s Day Massacre did. Maybe literally.

What’s so fascinating about Simone and Davis-Hunt’s collaboration on Clean Room is how they’ve built up the symbolism of their world in a way that invites us to explore the bodies he renders in an incredibly intimate way. The scars, tattoo, and unshaved armpits revealed as she strips down and approaches her target are the only information other than her name we’re given. Simone and David-Hunt, every bit as manipulative as Mueller herself, make voyeurism an unavoidable and critically important to the reading experience. Of course, the features our attention is guided towards on her body are, with the possible exception of the tattoo, things that run counter to beauty norms and the extreme hygiene required to enter Mueller’s eponymous Clean Room, giving her a curious place in the meticulously constructed world.

Nothing is safe or can be taken for granted in Astrid Mueller’s world, a point driven home by the delicate attention to the gore last issue that served to remind us that the organs falling out of a ruptured chest cavity can appear just as rounded, supple, and squishy as a boob or a butt. There’s little doubt that Simone and Davis Hunt snicker from behind the page as the audience is left apprehensive of wanting to touch a butt, weirdly enticed to touch a freshly disemboweled spleen, or both. Clean Room, where every boner, regardless of gender, is a weird one!