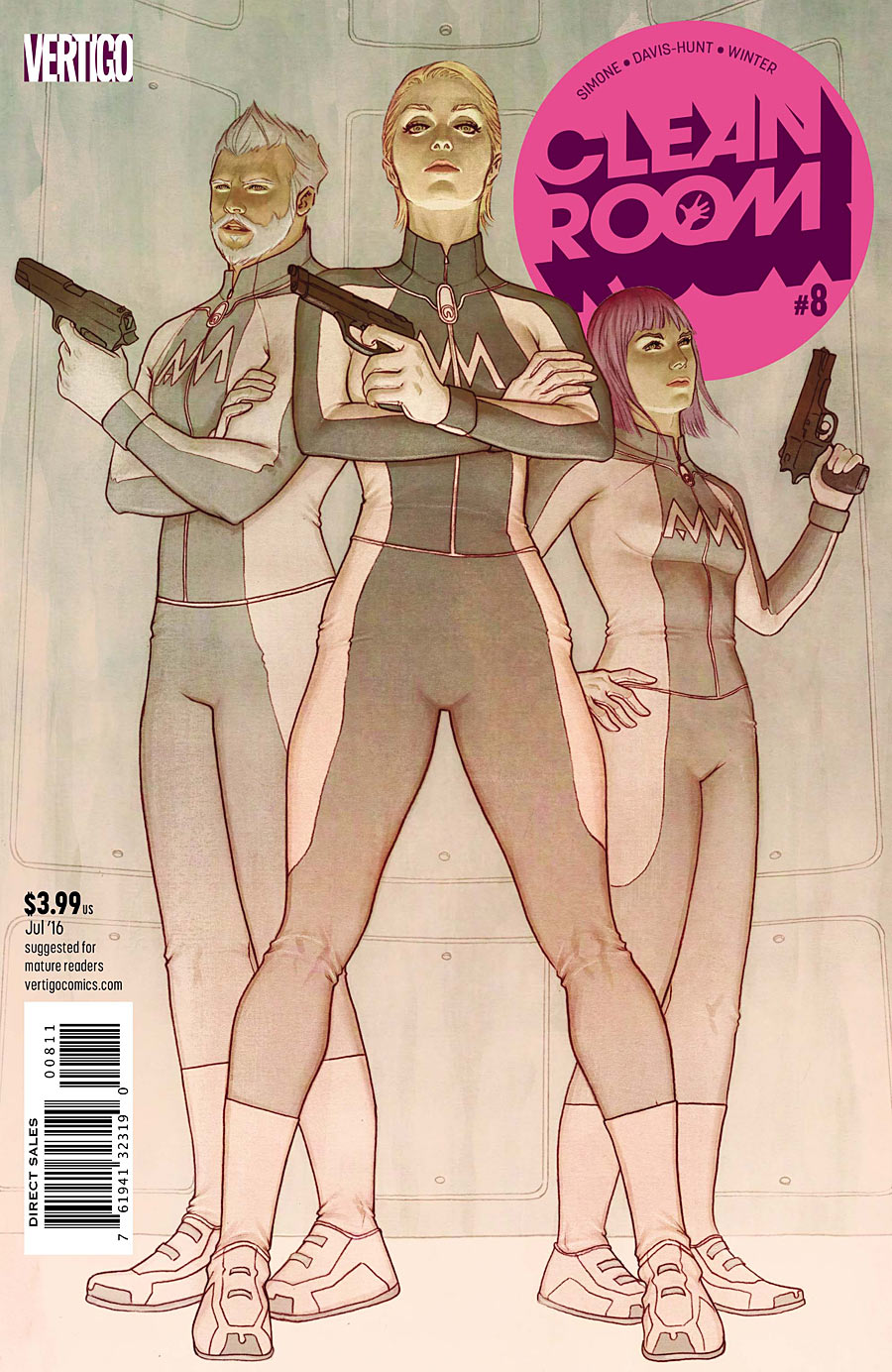 In the most stunning issue of the series so far, we learn that despite her public image as a middling fiction writer and quacky self help guru, some people take Astrid Mueller seriously — to the point of murder.

Shock is a peculiar reaction to evoke in long form fiction because it works on the audience like a viral infection. In a film or graphic novel you can deliver a single swerve that alters the entire narrative and walk away clean.

When Chuck Palahniuk wrote Fight Club as his debut novel, he didn’t have to think further than knocking the audience on their heels with the revelation that Jack and Tyler were the same person, and when director David Fincher and screenwriter Jim Uhls set about adapting it to film they didn’t have to think past it either.

It’s a principle that has dogged A Song of Ice and Fire author George R. R. Martin since he elected to separate Ned Stark’s head from his shoulders in the closing pages of A Game of Thrones, a burden he passed along to the writing staff and crew of the ongoing HBO adaptation.

Shocking, unexpected deaths are a hallmark of the series, blossoming into a part of the mass culture of the TV show with the proliferation of reaction videos. New viewers got the sudden shock of a beloved character dying, and those who’d read ahead into the books got a secondhand thrill from delighting in those reactions.

Beyond the infamous Red Wedding, however, the well began to dry up and the writers of both screen and page had to become increasingly crafty in creating circumstances that could elicit the same kind of thrill as the broadest base of the viewership began building up mental antibodies against it. There are clearly reasons besides the slasher movie like mounting casualties to engage with ASOIAF, but they’re the killer app of the franchise, what separates it from sexed and bloodied up historical dramas like The Tudors, The Borgias, and Wolf Hall. And so the metafictional scheming proceeds apace with that of the characters themselves.

Those layers of conflict, the lofty manipulations of gods and monsters sight unseen of the players on the stage is where Clean Room began, subtly identifying both the creators and the audience with the monsters that toy with the humanity. “Hell is real and the devil is coming,” Astrid tells Killian in a pre-recorded message.

Davis-Hunt draws it as a full page splash with Astrid looking out beyond the page with Killian nowhere in sight. The message is ostensibly for Killian, but Astrid is looking out at us and she stakes a full page to do so because she wants our full attention. She wants us to know that she knows.

It was made clear in the early issues that the cosmology of Clean Room’s world is arranged so that the celestial is infernal and the chthonic, or terrestrial, is angelic. The demons live in the sky and the angels are underfoot. It’s a novel way of drawing on the Gnostic tradition, but it also associates the gaze of the reader peering down into the fictional world with that of the demons.

The demons we’ve seen, Spark notwithstanding, embody the deepest and darkest aspects of our engagement with fiction. They delight in manipulating people, subjecting them to horrifying trauma, pulling their bodies apart and reassembling them, giving voice to sexual and violent urges in the most luridly descriptive way possible.

In fiction, and heroic fiction of the kind typified by superhero comics and ASOIAF in specific, we create spaces to push humanity to the extremes of pleasure and pain, punishment and reward that either cannot or should not be attempted in real life. This naturally evokes the spectre of the Marquis De Sade and The 120 Days of Sodom, whom Grant Morrison invoked directly in the pages of The Invisibles to address the point, but it suffuses the entire spectrum of our impulses from the highest to the lowest. We’ve reached a cultural moment where our instinct to use fictional surrogates to explore our appetites, desires, and political aims has transcended taboo to become a cornerstone of cultural discourse.

Shipping, headcanons, and other neologisms are simply the language we use to classify and concretize that surrogacy. We’ve normalized conversations about who we want to see fuck and how we want to see them do it. We conduct living autopsies and label it “meta” or “critical analysis.”

When I recently wrote about Emma Frost for Women Write About Comics, I took on the form of one of Clean Room’s demons to pluck her out of the world she exists in, dissected her, lectured about her component parts as one would in a surgical theater, reassembled her as an avatar of my anger, alienation, self loathing, and personal ambitions, then returned her to the wild. I did it because it was cathartic and allowed me to access a cultural shorthand that could deliver an easily understood portrait of my sense of otherness as a trans woman. 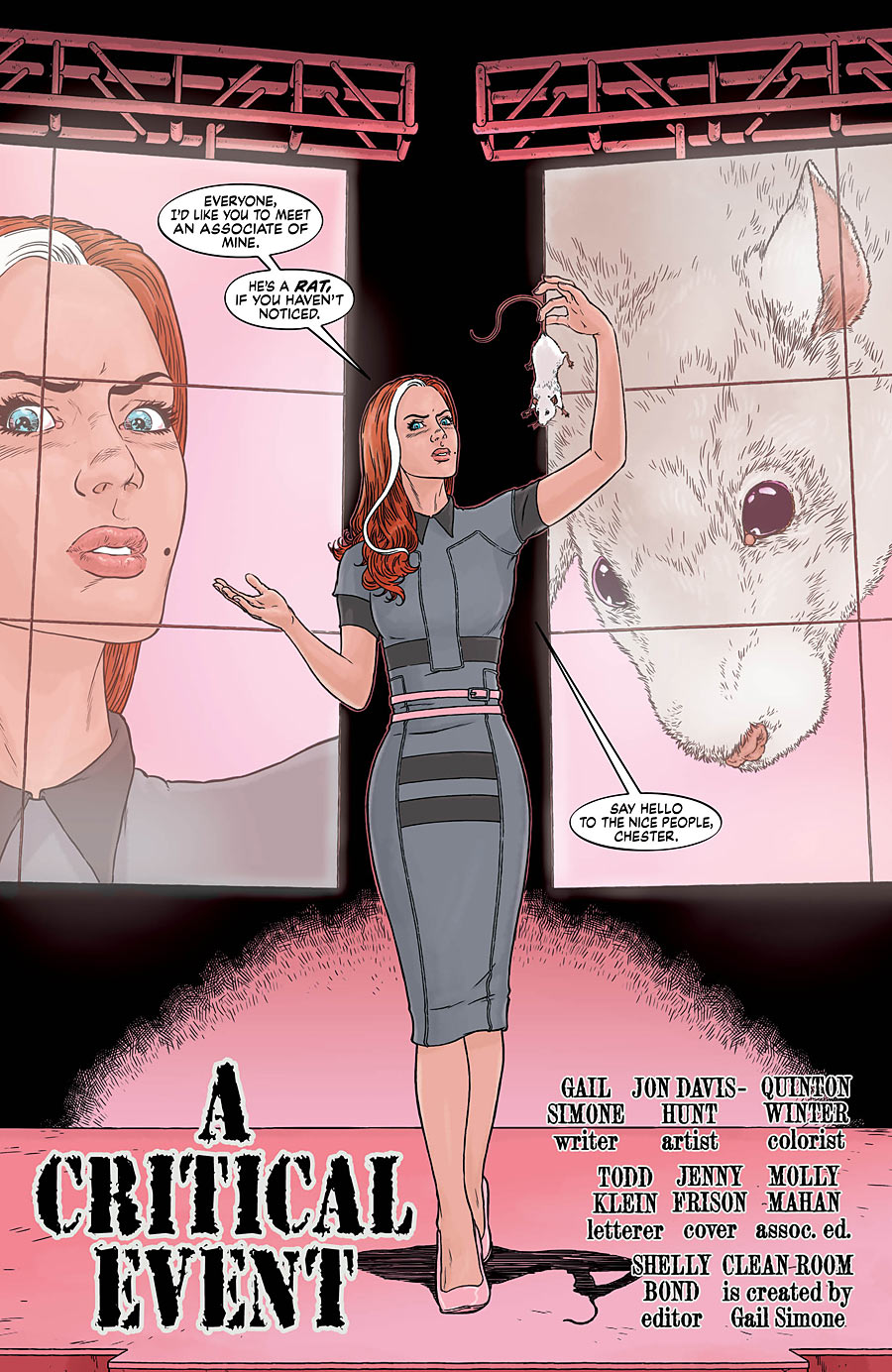 When I describe it in those terms it sounds like the dispassionate account of something akin to the greatest crimes and outrages perpetrated under the aegis of medicine, and that’s the fundamental magic of what Simone and Davis-Hunt have achieved with Clean Room. It’s the story of dolls in a dollhouse rebelling against the tyranny of the little girl who comes to play with them.

Far from issuing an indictment against our deep cultural attachment to fictional surrogacy, Simone and Davis-Hunt are undertaking to do what all transcendent horror does, transform the mundane into the monstrousness in order to force the audience to reconsider the institutions and practices we take for granted. This motif becomes particularly pointed when foregrounded by the fact that Simone is, to paraphrase Black Panther scribe Ta-Nehisi Coates, the woman who put the feminist critique of superhero fiction in the air when she wrote Women in Refrigerators.

The questions of ethics and morality that we circumvent by using fictional people as surrogates and pawns comes full circle in the form of Astrid Mueller, the doll who understands the dollhouse and the nature of the grasping hand better than anyone else. As the curtain gets pulled further and further back on her methods and motivations, it’s become clear that she’s replicating what the demons have been doing all along to her own people and perhaps Chloe more than anyone else.

Looked at from another angle, Chloe’s description of the Blue Utopians suggests that what Astrid is setting out to do is develop antibodies against the demons’ viral infection in order to consolidate her power and ensure her survival in the coming storm. The broad strokes are very reminiscent of the government conspiracy in The X-Files who bargained their humanity away in order to ensure their children’s survival in the alien invasion projected to occur in 2012, but Astrid’s machinations also suggest the layers of scheming and deceit that go into watching Game of Thrones.

In Astrid’s mind, she’s read the novels and is recording Chloe’s reactions, savoring them as she watches her adapt to each new twist. Astrid can’t wait for Chloe to catch up and join her in their secret knowledge the way ASOIAF readers have been fit to burst with things they want to gush to their friends working their way through the show about even as they publish said friends’ horrified faces to YouTube. Unfortunately for Astrid, a bullet got in the way.

Astrid’s shooting at the hands of her brother serves as a rude awakening to the fact that the dolls Astrid is playing with are just as liable to rebel against her as she is against the demons. What that bullet also does is cut through every layer of scheme and schemer to remind us as readers that we’re watching the TV show and it’s Simone and Davis-Hunt who are lying in wait to delight in our screams and dismay. They’re the true dollmakers who made Astrid powerful, alluring, persuasive, and just vulnerable enough to make us fall in love with a monster.

Interestingly this kind of shock hasn’t been a part of the narrative up to this point and it’s key to the success of the moment. You can only attempt a moment like this so many times until the audience becomes numb to it, and to stretch a metaphor, the superhero savvy audience that likely makes up the vast majority of Clean Room’s audience are teeming with antibodies.

Which is likely a major reason why the moments that rely on the sudden jolt of adrenaline spurred by shock or surprise rather than the creeping dread that saturates almost every page achieve it through lurid detail rather than bold emotional manipulation or the equivalent of kicking puppies. (Besides which, if Astrid were a puppy, she would be an unnecessarily violent Pomeranian.)

What really sells the shooting itself however, is how Davis-Hunt controls the page and forces the reader through it precisely as he and Simone intend. When Astrid’s brother stands up to threaten her, Davis-Hunt chops up the rest of the page into ten more panels that exponentially dilates time and creates suspense by stalling the reader’s progress to the next page.

The genius of it is that while intercutting Capone and the shooter with the rat is effectively a filler that further stretches the moment, it’s utterly impossible to skip over their movements. Until now Astrid has appeared so invincible and Capone so unstoppable that what lies on the next page feels very much like it could be the same kind of methodical dismantling that we’ve seen Killian deliver before, but instead it opens into a two page spread of the first moment of pure chaos in an otherwise tightly controlled narrative. It’s a masterful display of tension and release for a medium that cannot naturally control the time interval the way that audio or video can.

Just as Astrid appears to command attention and control the space in her video address to Killian, this spread is given the space it receives to convey a display of power, but in this instance, it’s a reassertion of Simone and Davis-Hunt’s power over Astrid and us as readers. Davis-Hunt closes it out the same way he opened it by breaking the page up into an intercut of the reactions to the shot with the rat in midair as we inch towards Astrid’s fate, but the tension doesn’t let up when she finally speaks.

Instead the story moves to Avil and Chloe blissfully unaware of the events unfolding in Chicago and Davis-Hunt again capitalizes on the sense of urgency by lingering on what would otherwise be a languid and endearing sequence, dedicating an entire row of five panels to depict Chloe’s changing expression as she tries the soup to prolong the wait for her reaction to Astrid being shot. It’s a technique that no amount of genre savvy can inoculate you against.

Which cuts to the specific kind of horror central to this issue. No matter how cunning, intelligent, or meticulous you are, there are some things that will always remain outside your control.