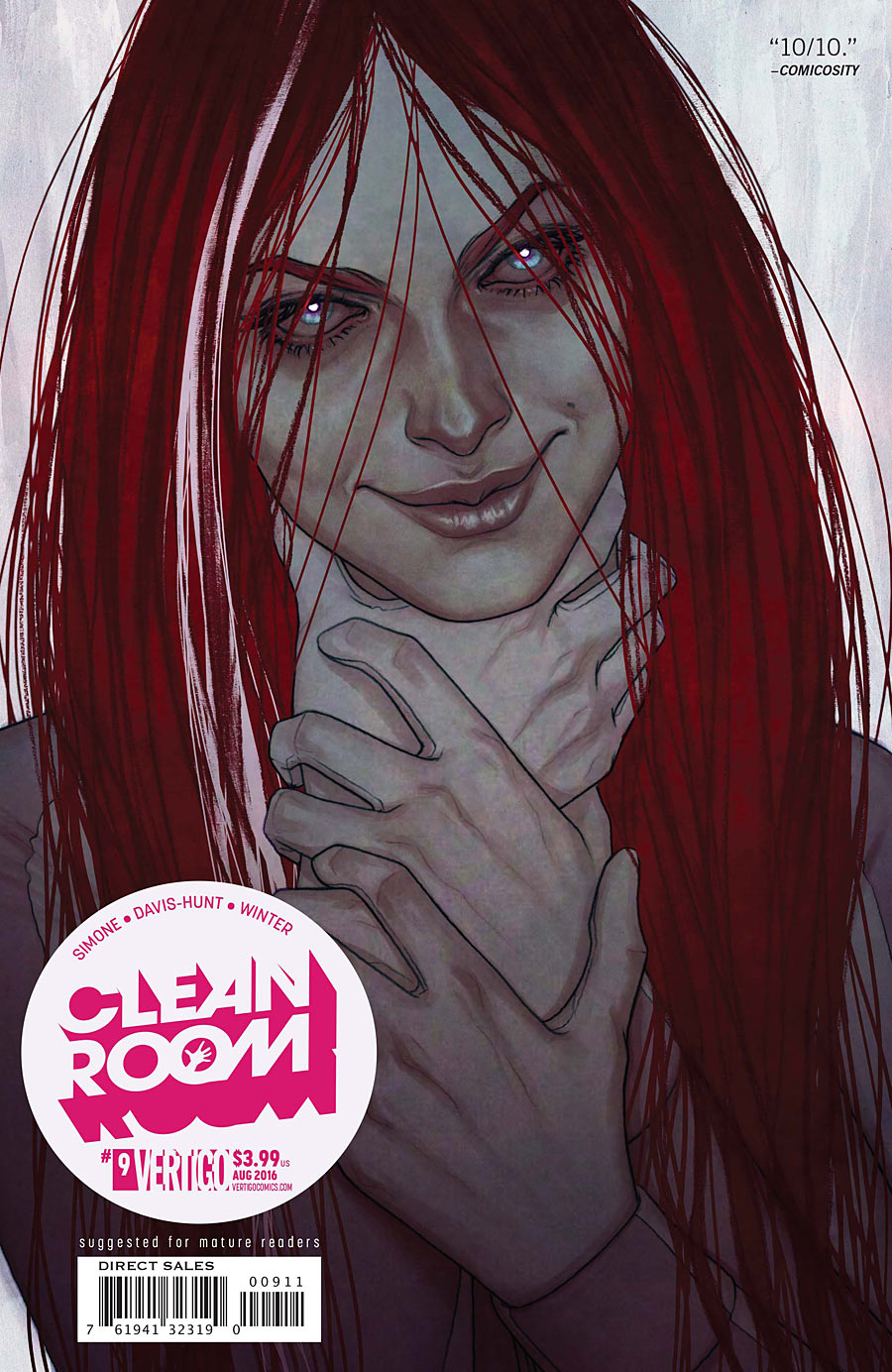 Reminding us again of just how little we still know about Astrid Mueller’s world, new players enter the game as she lies on the brink of death and Chloe enacts her master plan to save her.

The first Clean Room trade hits shelves alongside this issue, and then as now, there’s a lot more we don’t know about the full scope than what’s been revealed so far. And being able to achieve that across nine issues — while remaining a drum tight thriller — is a pretty spectacular feat.

Chloe, for what is probably the third time, thinks she has it all figured out when she releases Spark into the room, holding court at gunpoint and explaining how the entities have been mistaken for demons and subjected to exorcisms, with Spark being the most successful example.

After his intervention when the Surgeon attempted to kill her, Chloe has come to believe that Spark was somehow purified by the exorcism performed to get him out of the child he possessed. Thus, he has the potential to remove the bullet that conventional surgery couldn’t dislodge without killing Astrid. Even as Chloe says this, we’re treated to the specter of a church with Spark’s leering face on it and players that she hasn’t even guessed at.

While this standoff plays out in Chicago, a brand new faction claiming to have moles within Astrid’s organization emerges under the leadership of Renton Wenuka, the president of a massive corporation called PERMA-seek with its hands in businesses as diverse as bottled water and real estate. PERMA-seek exhibits a similar cult-like appearance to Astrid’s group, with a decidedly Christian bent to their language and a cowboy image in their matching bolo ties and belt buckles.

Their relationship to Astrid and their designs on her followers remain vague for the moment, but Wenuka, referred to as Brother by his subordinate (who bears a striking resemblance to Walton Goggins), describes Astrid as a “poor dear sister.” It suggests that she may have been aligned with them at some point in the 17 years between her initial epiphany and the present. If so, it offers some tantalizing clues to Astrid’s past and the future of the series.

As has been fairly clear since the first issue, Astrid’s organization is largely inspired by the Church of Scientology and the sparse details of her rise to prominence have been culled by the broad strokes of its founder L. Ron Hubbard. But what has yet to emerge is what inspired Astrid to structure her inner circle and public facing operation the way she did.

In real life, much of the structure of Scientology is theorized to have come from Hubbard’s time with NASA rocket engineer Jack Parsons, Aleister Crowley’s American protege and the head of the California branch of Crowley’s Ordo Templi Orientis. Eagle-eyed Vertigo readers may recall that Parsons and Hubbard were satirized in Jonathan Vankin and Leigh Gallagher’s The Witching series that ran from 2004-2005.

The basic structure that Hubbard likely cribbed from the OTO was in turn cobbled together by Crowley from the grades used by Freemasonry, whose influence we see clearly in Astrid’s organization. It’s how her followers have to achieve a certain rank before being shown the “truth” that resulted in Chloe’s fiance committing suicide.

That, of course, has parallels within Scientology in the Operating Thetan III track that reportedly reveals the existence of Xenu and Hubbard’s creation myth to members for the first time. What’s most intriguing about this new faction in play is that there is most definitely real world precedent for a Christian equivalent to Scientology in terms of the heavy influence of Freemasonry on its internal structure.

Joseph Smith, the storied founder of the Church of Jesus Christ of Latter-day Saints, was himself a Mason who, along with several prominent Mormons, founded a Masonic Lodge in Illinois in 1842, and began adapting symbols and rituals from the masonic tradition into the structure of the fledgling LDS church. While the LDS church and Scientology share little else in common, they retain a common thread between them that has kept Freemasonry alive as a cornerstone of American life both secular and religious.

What this could mean for Clean Room is that Simone and Davis-Hunt may very well be steering us towards a collision between fictional surrogates for the two most prominent American-born religious movements in a way that, to my knowledge, has never been attempted before.

Either way, this series continues to plow into uncharted territory that is absolutely stunning in its complexity, and as ever Jon Davis-Hunt’s precision in the visual language on display is what allows that success to happen. When PERMA-seek’s headquarters are revealed, we get a similar ant’s eye view of it disappearing into the sky, much like how Astrid’s headquarters in Chicago were introduced.

But on the facing page as Wenuka and Hausel loom large over the reflection of the city beneath them, we’re subtly informed just how much taller it is than everything around it, evoking the same phallic swagger as their posture and dress. It also draws the Tower of Babel to mind and the arrogance of trying to build a tower high enough to become gods themselves. Of course, the inverted cosmology of Clean Room puts them the closest to the entities that have so far been described exclusively as demonic.

Central to this issue in particular is how he’s able to take Spark’s fearsome image and twist it into a range of emotion from ambiguously unsettling to a near puppy-like innocence, making what Chloe sees in him appear dubious at best. Spark may well have been exactly what he presented himself to be and a kind of insurgent within an otherwise malevolent species, or he could have been manipulating Chloe towards some unseen agenda.

That door, however, was slammed shut the minute that Astrid ordered him vaporized when he recoiled in horror at what he discovered when he entered her to remove the bullet, leading to the latest, and perhaps most unsettling revelation about Astrid.

The issue opens with a stunning splash page of Astrid’s face being bisected by a scalpel, revealing a mass of twisted demonic biology instead of blood, bone, or cartilage. As her medical team operates nowhere near her face, it’s clear that we aren’t seeing a normative view of the events, but it doesn’t clarify anything about the viewpoint.

That is, other than the perspective she’s drawn from suggest that it’s our own hands on the scalpel in the most macabre evocation of the metafictional dynamic I expanded on last issue. We’re peeling into Astrid to see what lies beneath, and it isn’t pretty.

From the normative perspective, in the words of her own medical team, Astrid defies biology to remain alert and conscious as they operate, astounded that she can speak to Killian and Chloe in her current state. Even Spark finds something truly horrific in her body, identifying her with death, something he believes she infected him with.

Chloe, describing her plan to save Astrid, confirms that the entities are known to be able to alter human physiology, scarcely stopping to think about how they, or someone else, may have altered Astrid already. It could very well be that moment of shamanic transfiguration that the flashbacks continue to inch towards as Astrid discovered a gigantic biomechanical thing floating in the desert. The question of who Astrid is appears to be subtly shifting to what she is.

Of course even if Astrid appears supremely vulnerable and unmade under our own hands on the opening page of the issue, she smirks knowingly at us in Jenny Frison’s most unsettling cover yet, with three hands of unknown origin clasped around her neck. “Your hands around my throat, ask me to let go,” she seems to say if you’re familiar with the relevant Death in Vegas song.

Above all else this issue is a reminder that whatever Clean Room is to become, the scope of what it will achieve and how it will be remembered can still only be guessed at. The only sure thing is that it continues to demand a front row seat to the proceedings.