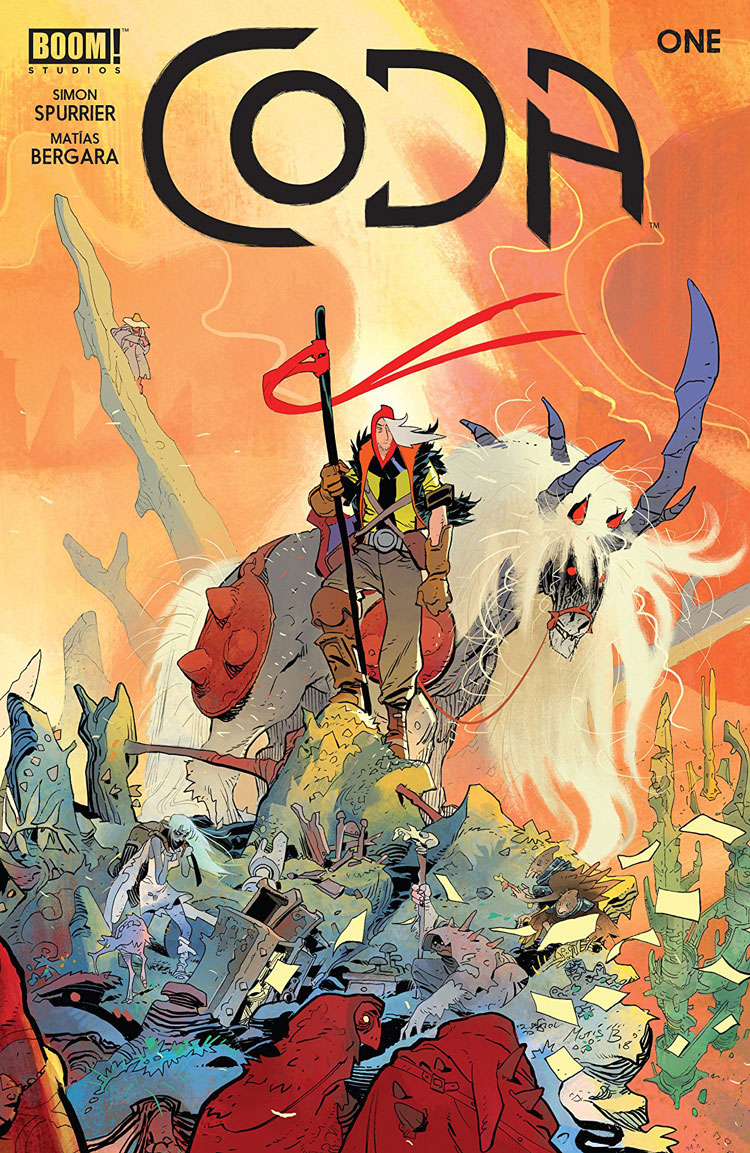 Once upon a time there was a fantasy realm of magical creatures, elves, and questing knights. As happens in all stories of this genre the good kingdoms fought against evil forces many times and were triumphant each time: until they weren’t.

Coda takes place after the forces of evil have triumphed causing a magical apocalypse that wipes out the magical races and power itself. It’s a genre bending tale that takes a look at a disenfranchised world and the people that desperately try to survive afterwards.

Simon Spurrier has created a fantastic ORIGINAL post-apocalyptic world for readers to discover but even more interesting are the fascinating characters that the reader will immediately want to learn more about. The first moments in this new world leave the reader with questions about what is really going on but as the story progresses they are quickly rewarded. We are introduced to a world that is unlike any other and seemingly filled with characters that have been deeply affected by the upheaval they endured.

Though many are destitute it seems the rest are mutated versions of what was once considered noble. It allows us to take a step back in order to re-examine and even laugh at fantasy tropes. However, these inhabitants are immediately likable and enjoyable.

The world they live in may be run down and decaying, but it piques the reader’s interest to want to explore it and learn more. It could be a depressing story, but the humor that Spurrier has deftly injected into the script keeps it light-hearted and fun.

Matias Bergara and Michael Doig bring this world to life with a style that is pitch perfect for this story. Bergara has done an excellent job at designing a world that was once magical but is now decaying like a tooth from too much sugar.

The state of the world is visually symbolized by a creature that the main character runs into on the first few pages. We meet a once magical creature that is now a mere framework of its once powerful existence. It’s comedic, sad, and intriguing all at the same time.

Just as Spurrier has kept the script from getting too dark with humor, Bergara’s style backs that levity up with creature caricatures that will bring a smile to the reader’s face. The color choices are well made and further the idea of this world by using a palette that feels slightly desaturated and bleeding away. Areas closer to once magical sources still contain a bit of fantastical colors. It all comes together as a feast for the eyes.

Colin Bell handles the lettering in this debut issue and does an excellent job. He provides quiet moments with a soft lettering style that almost fades away under other speaking voices and loud moments with powerful violent letters. It all works great and goes hand in hand with the tone of the story.

Coda #1 is a modern fairy tale for our world as it is today. Readers of all shapes and sizes will find something in this world that they can relate to and be entertained by. Spurrier has created a world, situation, and characters that promise a bright future.