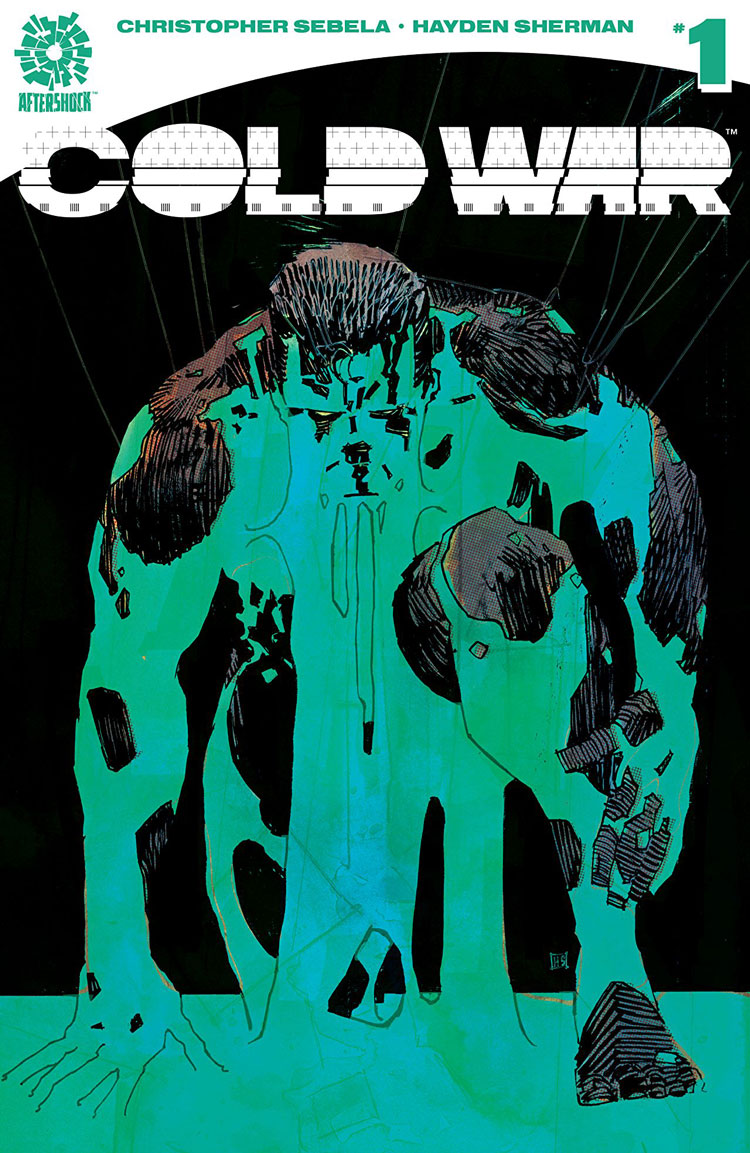 Anti-war works have to juggle a lot more moving parts than their jingoistic foils. An anti-war story must be humane but not overly sympathetic, entertaining but not glorifying, visceral but not fetishistic. And yet even the best anti-war material, like, say, Full Metal Jacket, is always in danger of being embraced by the people it condemns.

Christopher Sebela and Hayden Sherman strive to escape that fate in their new Aftershock series Cold War in part by setting it not in a complicated war from our own times but in a panicky, chaotic future that could be, where the frontlines are populated by resurrected people from the past. It’s an interesting conceit that riffs on the very modern fear of being commodified even in death by faceless corporations without our consent.

The only problem is, it’s not very good.

The core issue with Cold War, at least in its debut, is its inscrutability. The basic concept of the series is easy enough to understand (particularly if you’re watching Netflix’s Altered Carbon): in the future, cryogenic technology has advanced enough that people can be preserved for centuries and then resurrected, but when the story begins the characters getting thawed out are immediately “drafted” for a mysterious war.

No explanation about the enemy or their motives is given before the characters are literally dropped onto the battlefield where the bulk of them die more or less immediately while the ostensible lead, a grizzled veteran soldier, tries to rally the remaining troops. Thematically, that decision makes sense, and could make for effective commentary, but paired with Sherman’s rough aesthetic and a lack of storytelling finesse, it ultimately makes for a book that’s all concept and no substance.

Cold War, to be clear, does not seem to be an abstract comic where the inscrutability is a fully conscious decision, meant solely to replicate the pointlessness of war. Sherman’s style is brash and frenetic, like Frank Miller’s Ronin as a video game, complete with VR helmets and guns and faceless baddies. The use of flat backgrounds and heavy lines in particular makes Cold War feel stylish and fresh when its panels are viewed in isolation; it’s only once they’re taken in full that things fall apart. This is inscrutability from a storytelling perspective, all momentum with no cohesion or rhythm.

Admittedly, Sebela doesn’t give Sherman much to work with as far as characterization and setting go, the people all look the same by design and the battleground is intended to serve as Every City, USA. But these factors make the visual storytelling even more important than it would normally be.

Yet Cold War feels rushed and unfinished, its anonymous characters frequently drawn as actual blank slates, the actions that claim their lives rarely rising above the creativity of clip art, dropped in purely for function without much thought for art. The situation these people are in is terrifying and hopeless, but it’s hard to feel that when they all look and behave like mindless NPCs.

That rushed feeling extends to Sherman’s coloring and lettering of Cold War as well. The comic opens with the dialogue from the computers thawing everyone out rendered in what looks like the pixelated Chicago font from old Mac computers, more or less the tech equivalent of Comic Sans. The effects Sherman letters in are also notably inconsistent, sometimes clearly digitally designed with other sections featuring coarser SFX that could be mistaken for placeholders that got left in.

If one of the signs of good lettering is that you don’t notice it, Sherman need not worry about that — this is lettering that is trying everything it can to make you notice it at all turns. Sherman also has a habit of using solid color backgrounds that are often the same or nearly the same color as characters’ faces, leaving no real visual anchor for close-up scenes. Put simply, this comic does not pop, and that’s a fatal flaw for an action comic.

But even without these visual flaws, the story itself, in its current form, offers no real incentive to stick around and see what happens next. The dialogue and structure (and a third act twist) make it clear that Sebela intends Cold War to be a takedown of action sci-fi tropes, but the story fails because there doesn’t seem to be as much thought put into creating something new and interesting to take the place of the cliches the script skewers.

Cold War may have been created to attack power structures that reduce us to faceless cannon fodder but it’s hard to care about that message when the delivery of it is so uninteresting and muddy. Instead of being a provocative anti-war work that raises questions while entertaining, Cold War meanders, full of ideas and characters that are so forgettable it’s hard to blame shadowy forces for viewing them as disposable.