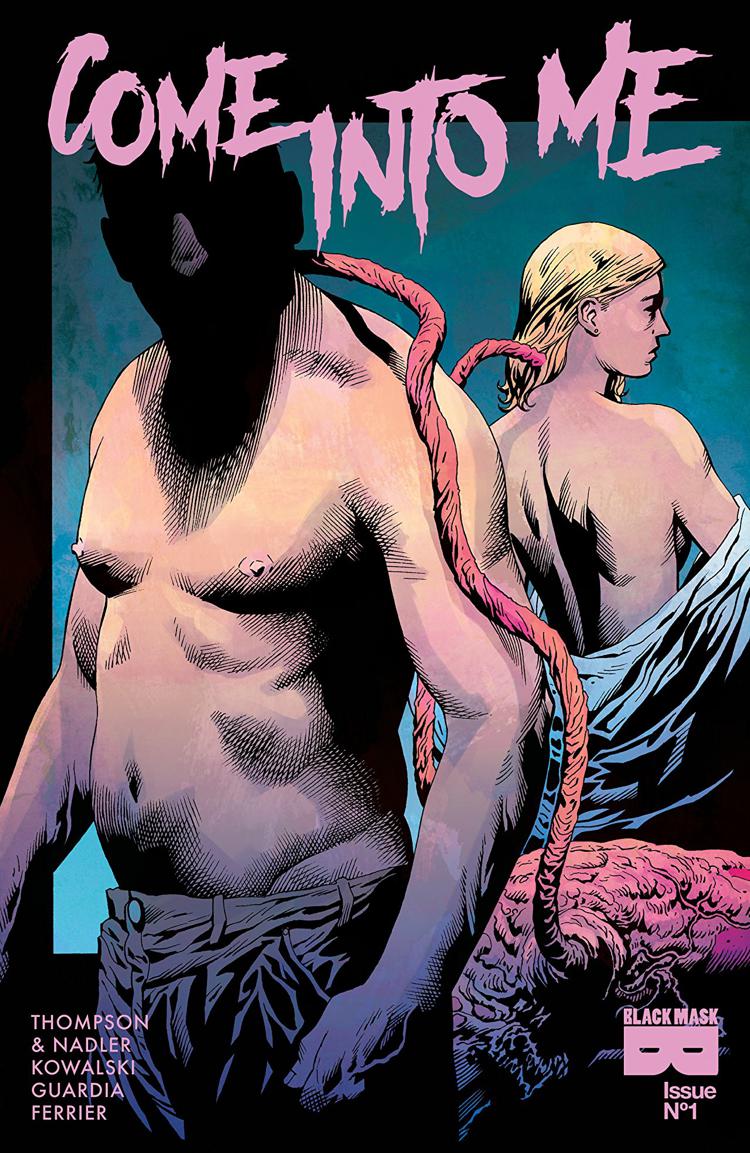 We’re heading closer and closer to a point where our physical bodies can sustain themselves for lifespans previously thought impossible, recover from diseases that previously destroyed entire generations, recuperate from injuries that would have been cataclysmic to our ancestors. And yet there remains the hurdle of our brains, those wildly complicated yet vulnerable command centers that so often betray us even when our bodies are operating at peak efficiency. This problem has fascinated science fiction for most of its existence and with the advance of the computer age, writers have focused on technology as a possible solution, particularly the idea of transferring our consciousness as biodigital information.

What makes Come Into Me stand out within this area of science fiction is its grotesquery. On one end is the grotesque collision between capitalism and immortality Zac Thompson and Lonnie Nadler explore in the writing and dialogue. On the other end is the grotesque merger of organs and machines that Piotr Kowalski and Niko Guardia bring to throbbing life in the art. Come Into Me is neither the shiny pristine AI sci-fi of an Ex Machina or Her, nor is it the shadowy, broke down sci-fi of a Blade Runner or any of its descendants. Instead it is a sci-fi work that is of its era in the best way, willing to confront the escalating monetization of life itself with imagery that matches the sickening horror of that aspect of our society.

From its very start, Come Into Me forces readers to look directly at these twin realms of horror. The comic opens on entrepreneur Sebastian Quinn speaking to a group of investors while a team of surgeons prepare to connect two patients, brain to brain. Quinn explains that his company InBeing seeks to change “the face of human consciousness forever,” solving the “mind-body problem” via a “synaptic connection,” a kind of technorganic transfer between two humans using a Cronenbergian lump of organ tissue with two phallic ends that plug into the base of the skull with a scalpel-like protrusion.

This first live attempt at synaptic connection goes wrong but when the comic shifts six months ahead, the focus is not on the human cost of that failure but on the financial cost. Quinn is first shown staring intently at a screen counting down the dollars of runway he has left, then at the seemingly angry test subjects that remain in the facility, impatient for their chance to be a part of the groundbreaking trial, no matter how doomed it may be. That impatience is clear in the faces of nearly every character Kowalski draws here, but with enough variety to illustrate that it comes for different and often contradictory reasons.

Quinn serves as a neutral character, pulled between the medical advancement interest that hits home for him as a survivor of a damaged body and the commercial interests that he needs to accommodate in order to keep going. But Come Into Me’s most novel and interesting conflict literally arrives at his doorstep in the form of Becky, who insists on getting involved in the InBeing trial not for financial gain or for saving lives but for the thrill of being part of a brand new form of connectivity, an experience that takes the “seeing through someone else’s eyes” component of social media to its logical next step.

Thompson’s writing has suffered in the past from being overly beholden to the influence of David Cronenberg so this aspect of the story comes as a relief, providing blunt social economic commentary that Cronenberg usually obscures or avoids altogether in even his best work as well as an opportunity for Kowalski to better balance the visual and social grotesquery of the work.

There are still some cumbersome moments, like the technorganic paintings in Quinn’s office and the videodrome organ screens that not only track a patient’s vitals in the operating theater but also the dollars investors are kicking in, that hit you over the head with the Cronenberg influences but for the most part Thompson and Nadler stay out of the way and let Kowalski work in his own aesthetic, with Guardia’s mercifully bright and clear colors heightening the emotions and the action while even Ryan Ferrier’s lettering offers a fresh approach, with its loose, unsettlingly serpentine scrawl.

That confidence in Kowalski and Guardia is at the center of what is Come Into Me’s most effective moment of body horror, after Becky gets around InBeing’s rule that subjects must volunteer in pairs by offering to pay Quinn $50,000 for a 60 minute test ride of the technology. Quinn relents but insists that he be Becky’s partner, resulting in the two of them witnessing each other’s bodily joys and torments in a vivid and abstract sequence, the details revealed in glitchy bursts and batches rather than in exposition.

Quinn’s entire company is essentially the result of his frustrations with his pleural empyema and the surgeries to remove liquid from his lungs it required. Quinn tells Becky “When our bodies turn against us, we learn who we really are,” nearly provoking her to confess something similar about her own body but she stops short and switches gears, demanding Quinn exploit his technology and “sell memberships to The Social Flesh” to stabilize his company’s profits. We’re not privy to his response to this suggestion, instead the comic pans out to show their internal conversation from behind the silent view of some hospital glass. But we do see how the two remain in sync even after the 60 minute experience, wordlessly mirroring each other’s actions from afar.

From there, Come Into Me ends its first issue with more questions than answers, setting up a number of paths this conflict and technology could go down as well new moral and ethical conundrums. But at the center of all of those remains a very old question, perhaps the oldest question: what is consciousness? Except it has a fresh twist in the question of whether we need to know the answer to what consciousness is in order to evolve it and whether the evolution of consciousness is something that we should strive for for personal, social or economic gain. Come Into Me can’t possibly definitively answer these questions but in asking them it stands out as a bolder and more fulfilling sci-fi work than so many of its contemporaries, who favor examinations of human interests over what it means to be human and what it will mean to be human in a future where even our thoughts are commercialized.