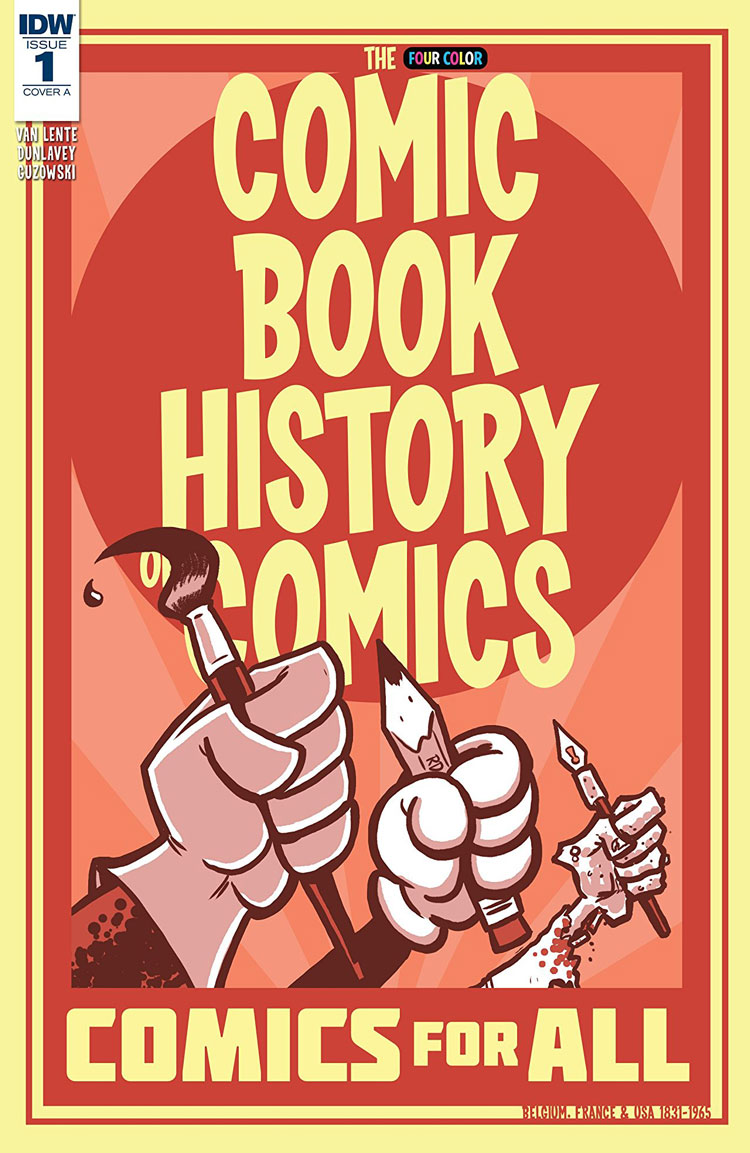 Comics, as an art form, have grown exponentially over the years in its craft, stories, and respect as an art form. Lente, Dunlavey, and Guzowski go back through its history, explaining the beginnings of what we view as comics and graphic novels in the west in this first issue of The Comic Book History Comics!

Van Lente starts the readers out with the beginnings of the term graphic novel and the evolution and censorship of comics during the 20th century in both the United States and Europe. It’s intriguing to learn about how the general idea of Will Eisner being the coiner of the term graphic novel is not necessarily true. The evolution of censorship and comic genres is an interesting topic and Van Lente provides a well plotted out history that provides an explanation of the rift between the European and the American markets and their censoring.

However, I’d say the one page story about the “Walt Disney” of India was the most fascinating of all the history brought into the limelight in this issue. It’s a tale about a country coming to grips with their newfound freedom from the English crown and their search for identity. It’s inspirational and I can’t wait for the issues of this series that will go more in depth into non-European and non-American comics.

The art by Dunlavey is fun. It harkens back to the comics you’d find in a newspaper funny pages and feels dynamic on the page. The way each panel relates to the words is entertaining. It’s not always what I’d expect for the art to be for the words and it’s amusing to see how that influences the words itself and what the words are trying to portray.

Guzowski’s coloring works perfectly with what the comic is trying to portray: A slightly tongue-and-cheek look at the history of comics and how it evolved into the media we know today. The loud, vibrant, solid colors provide much of the levity within the comic and color the comedy within the pages.

The Comic Book History Comic: Comics for All has started off well enough. I feel like I’ll be more intrigued once they move away from the more talked about markets, like the US comics, European comics, heck, even manga, but if you want to know more about the history and creation of comics, this is definitely an informational comic that’s both helpful and entertaining.