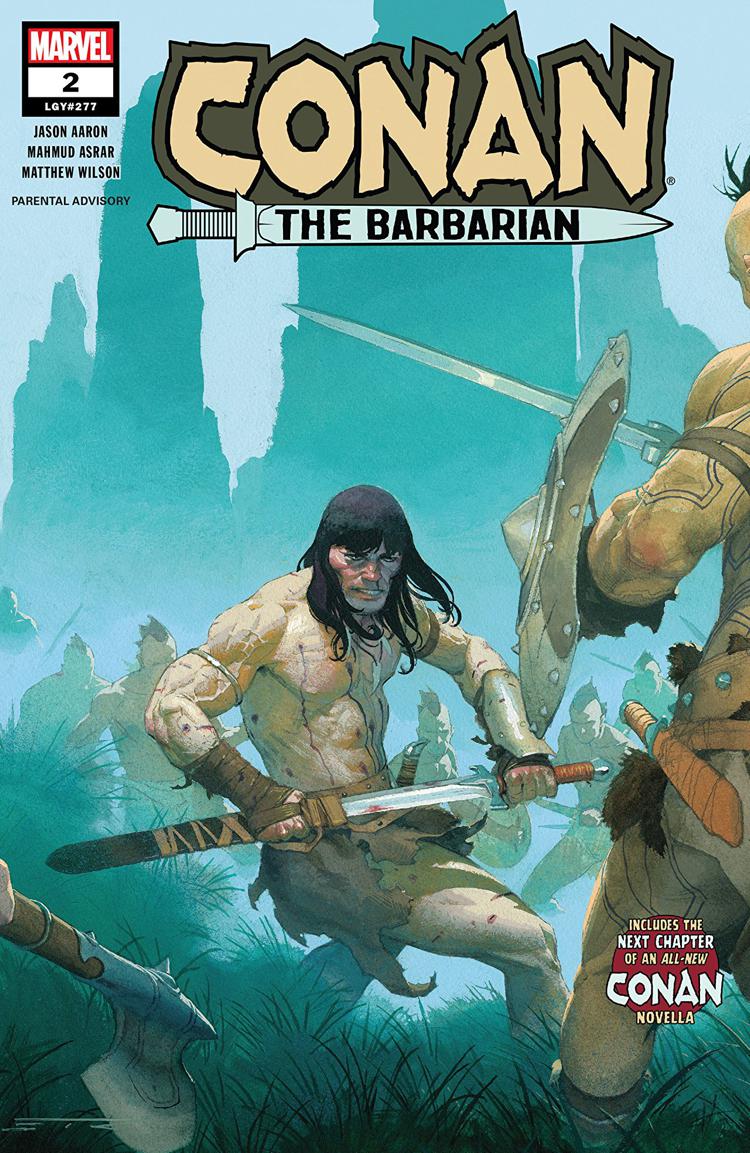 Jason Aaron’s exploration of Conan, back under the stewardship of Marvel Comics, continues! At first this story might seem like a deviation from the ending of issue #1, but sticking through with the whole story from start to finish rewards readers. And, actually, if you missed Issue #1, this issue actually makes for an interesting story with an amusing premise that serves as a perfectly fine jumping on point for new readers who might want in.

The premise of this issue begins simple, with the famous barbarian facing dangers in dense and primal territory, but actually swerves to tackle some unique issues. One of these issues, what being civilized means, is something that Howard wrestled with throughout his own life on an oil boom-town in Texas. The other aspect of the story, Conan teaming up with the very Picts he is normally famous for slaying, is also a fantastic way of keeping these stories fresh. As a long-time fan of Conan stories, I believe that Aaron really ‘gets’ the heart of what makes a Conan story work. Conan is never truly the most powerful character, or even the strongest. In a way, much like Robert E Howard himself, Conan is a figure who is trying to find his own place in the world, ones which often don’t seem to match the age he is presently in. While Conan is presented here as a peerless fighter, he is saved by Picts, assisted by Picts, and is asked questions by their lifestyle that he cannot directly answer. Aaron’s showing Conan as having the kind of emotional vulnerability as he is in this book is fantastic, and it boosts this reviewer’s confidence that this book will go on to be fantastic.

In addition to the story being genuinely fascinating, the art by Asrar is the real highlight, along with Wilson’s amazing colors. Those who have read my reviews know I tend to almost always find that the company pairing the artist(s) and the colorist(s) know what makes a good team, but … man … Asrar and Wilson are probably my favorite team in years on any book. Maybe it is just me, but the designs of Asrar are perfect for Conan, and Wilson’s rich colors highlight the books like a dream. For example, one sequence of blood drenched gore is illuminated in blazing red against the shadowed bodies of felled serpents. Every inch of this comic is beautiful to look at, both from a design aesthetic and from a color/tonal one as well.

Conan #2 continues the strong showing for the world’s most famous barbarian and his showcase back under the Marvel Comics banner.