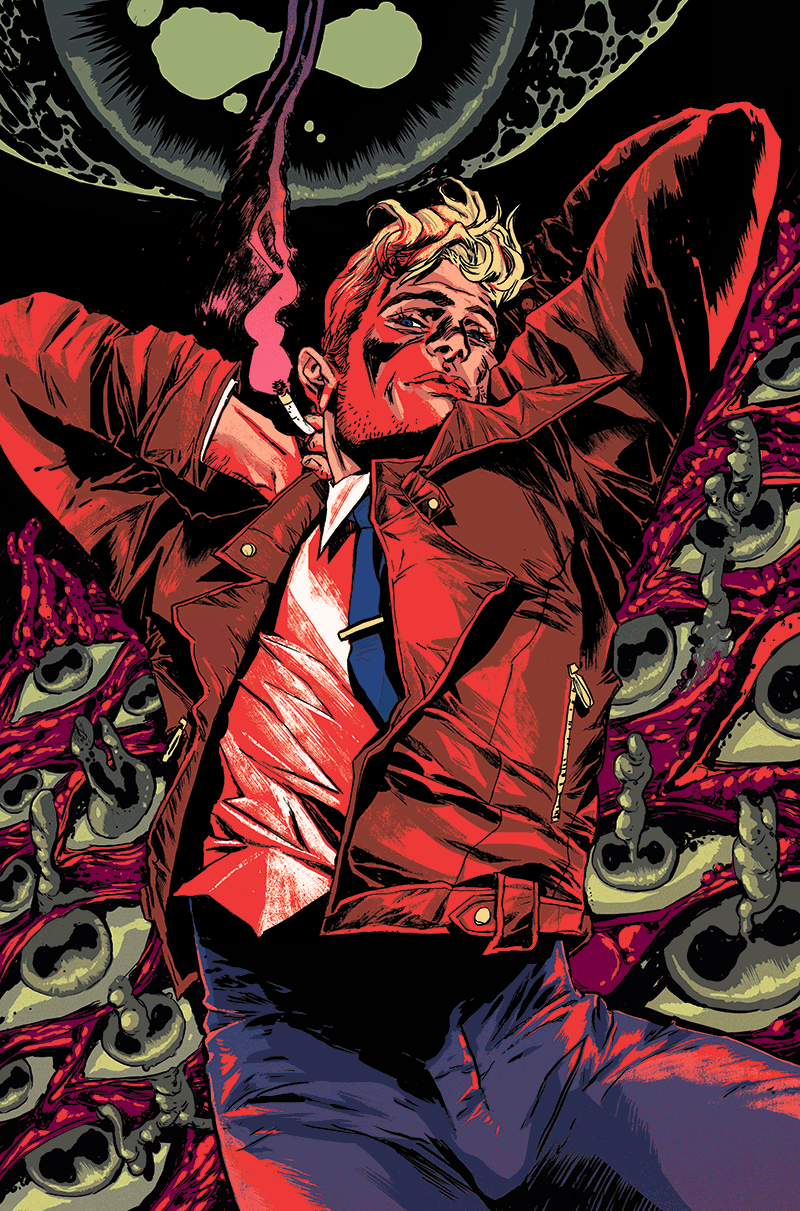 John Constantine arrives in New York, ready to rumble. So, it isn’t long before he’s bollocks deep in trouble — and his name is… But before he could get to THAT, a little tickle time with a demoness and a task that only he can perform for her, all the way down through the nine rings of hell.

Tynion and Doyle are pulling no punches with the new Constantine series, giving us the right bastard you can’t help but fall in lust with right out of the gate. Their rendition of the Hellblazer is so… alive. Long gone is the weariness of the weight of magic and even a hint of self-conflict. This Constantine might even border on sociopathic, and it’s making me want him all the more.

Of course, the premise of so much of John Constantine’s power is in his role as the Trickster, that Loki-esque slight of hand that comes with an overwhelming amount of ardor and need to please. He’s a magnetic guy from cover to cover, not the wittiest, and not the handsomest, but by far the most charming. The writers play this angle to a perfect degree, having John flirting his way into pants (that’s a first), into a free meal, almost into a date with a hunky, bearded muscleman (be still my heart), and out of doing anything for anyone without a cost.

He’s dirty. He’s a bastard. But it’s easy to see why everyone around him falls for him. I’m starting to, as well.

Rossmo amps up the charm as well, rounding out John’s face with an almost baby boy-like quality. His expressions are so well done, ranging from the smarmiest wink to a darkened face lit only by a cigarette. The book as a whole is a visual delight, with a beautiful texture applied to the most minor of details in every panel. The effect is to blend this comic book flatness with the feel of dimensionality, and it lends to the otherworldliness of John’s walk through the world — real and demonic alike.

The art style as a whole is an interesting blend — it’s not as unconventional as a lot of Vertigo titles, particularly of late, exhibit, but it’s far more experimental than your average super-hero comic. Where that leaves the book is feeling like something you might want to hide from your mum if she’s particularly censoring, even if you’re a fully grown adult.

And with good reason, honestly. Page one nudity, sexual activity, strange balloon-like nipply things flying off a geisha-looking demon’s neck. Yeah, this is not your mother’s DC Comic.

A welcome return to more adult stories set in the DC Universe, with not just sex, but sexiness throughout, Constantine: The Hellblazer #1 instantly convinces me of what every one who encounters John comes to know: he’s a right bastard, and there’s no avoiding falling for him. Over and over and over.