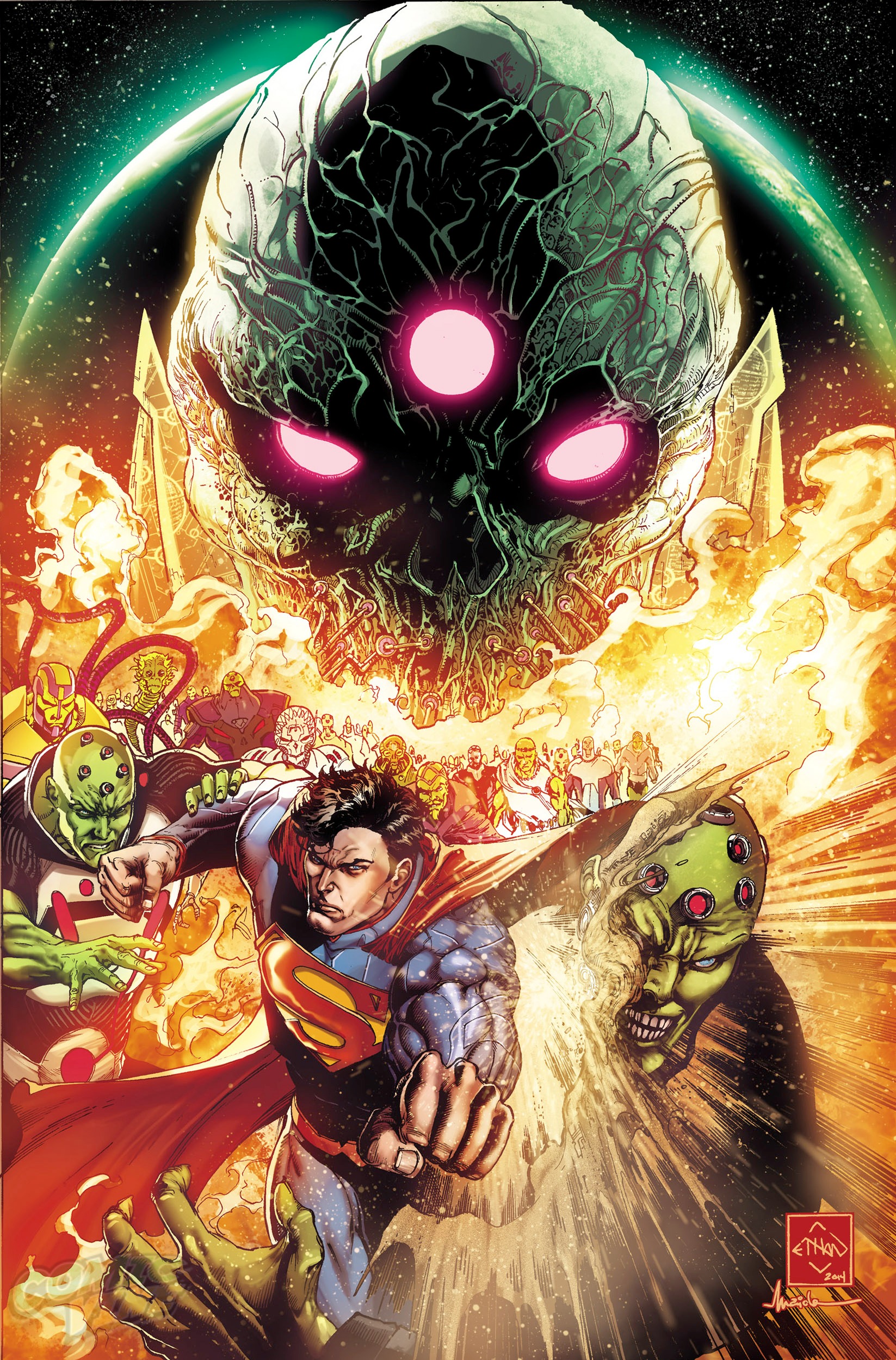 In the moments after Superman: Doomed #2, the Man of Steel disappeared, only to reappear in the pages of Action Comics. So, where the heck did he go?

Welcome to Convergence, DC Comics’ two month event celebrating its entire history and infinite earths. If you ever loved a version of the DC Universe that appeared lost and gone forever, take heart! It’s likely just trapped on an alien world thanks to Brainiac. Huzzah!

And there’s no better way to jumpstart a celebration (and a callback to the art stylings of the original Crisis on Infinite Earths) than with Ethan Van Sciver on pencils and inks. Very few artists are able to capture the amount of craft Van Sciver can throw on a page and keep his figures looking simultaneously realistic and energetic.

His Superman feels like a strong cross between the Superboy Prime of his Sinestro Corps War and an elder Kal-L of the Infinite Crisis era. And while we do get to see a glorious two-page spread looking back at the many deaths of Superman across the multiverse, this combination serves to reinforce the idea that many aspects of this hero exists. We may get to see Brainiac shift from form to form (which, by the way, is delightfully disorienting), but we only get one Superman. That he has so much of his predecessors built into his appearance is such a perfect expression of the overall theme.

There is no doubt that this issue asks more questions than it answers. The shifting visage of Brainiac is stunning, but completely (and deliberately, I feel) confusing — so much so that you start to develop a certain delirium on careful read. Jurgens and King set the tone for Superman’s experience well in that sense, and at the same time explains the premise of the series in clear, easy to grasp terms.

The glossary of cities at the back of the issue helps as well, for a lot of places I could never have imagined appearing in a DC Comic again do in fact exist on this Convergence world. Nothing lost, everything found, and my only question is how could I have not noticed until now that there are so many versions of Metropolis?

King and Jurgens also craft what I believe to be a genuine issue #0, something that sets the stage, but doesn’t get into the action. All that is left for issue #1, which could easily be a jumping on point for the less conscious reader. But certainly what’s included here is so worth the commitment. The issue is knock down crazy beautiful, and eloquently written from the narrator’s point of view. Definitely not one to pass up.

While we’ve yet to get into the meat of the event, Convergence #0 offers a strong one-on-one story amid what’s likely to be a pretty frenetic series. Van Sciver keeps both characters (and all their iterations) looking the best they ever have, and creates a visual feast of some cities we haven’t seen in quite some time. DC definitely has me looking forward to the next two months to come.