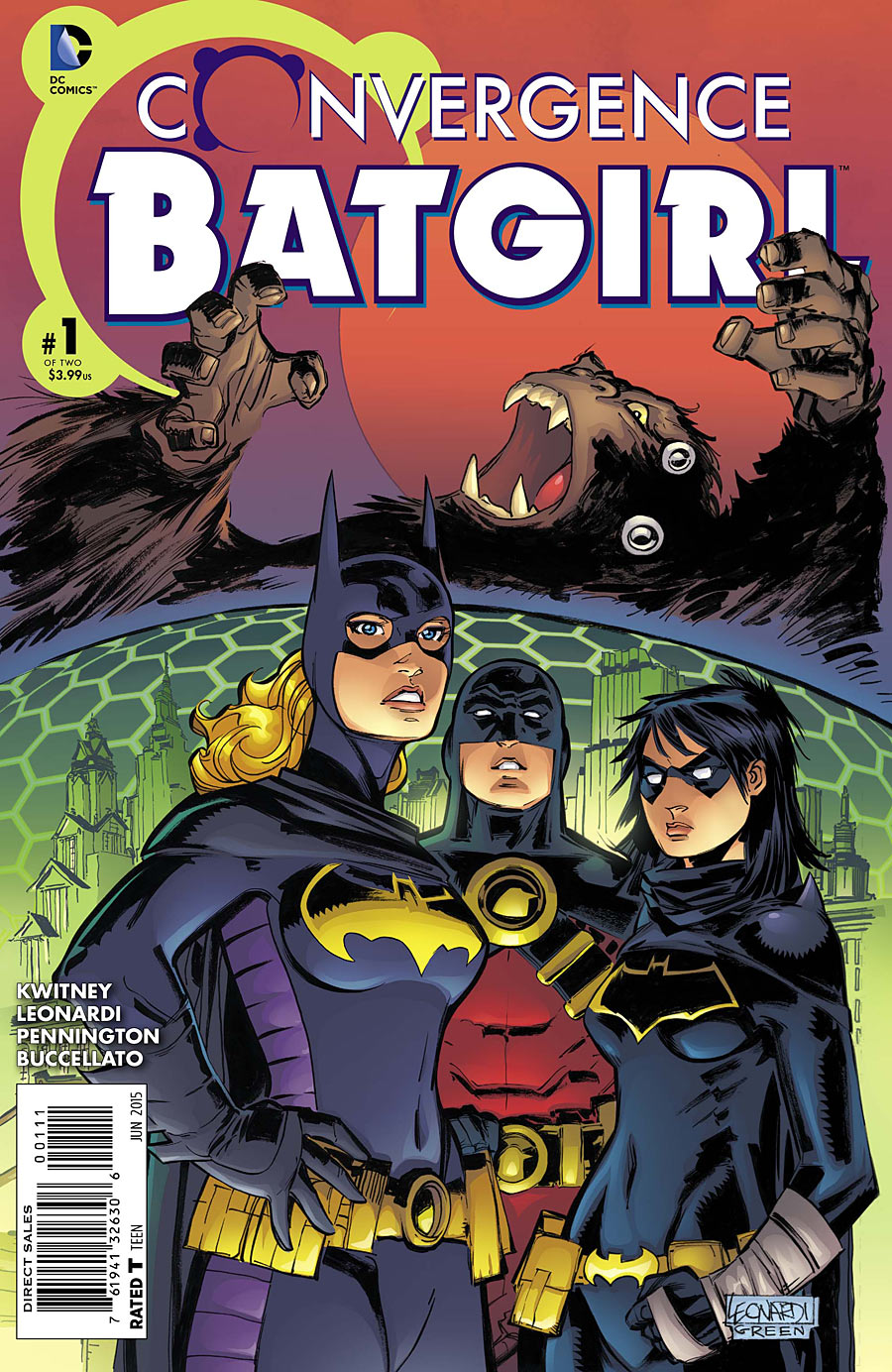 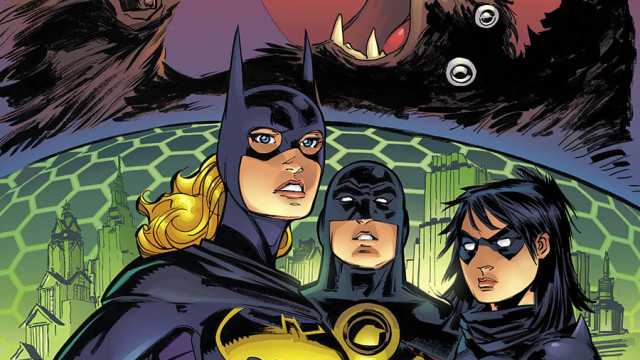 It’s the moment we’ve all been waiting for. Convergence. DC Comics is going back before the new 52 and pulling story lines and characters that haven’t been seen for some time. For those fans who aren’t quite sure what that means, our own Keith Callbeck did a great job explaining in his Read Between the Lines feature, but the long and short of it is this: this month and next month we’re getting pulled out of the new 52 continuity and taking a brief 2-issue stint into the events that happened before the 2011 reboot. In this issue, Convergence Batgirl #1, Stephanie Brown has been chosen as a champion for Gotham, which must battle other places in different universes in order to survive. For the first time in several years, fans are reunited with Stephanie Brown as Batgirl and, even more excitingly, Cassandra Cain as Black Bat.

I’m going to chat about this for a little bit because I think it’s important for newer fans to recognize the significance here. Steph and Cass were two characters who were lost in the shuffle of the reboot and including Cass in particular is pretty significant, since she was the first Batgirl to get her own solo ongoing.  Stephanie reappeared in the current continuity as Spoiler in the pages of Batman Eternal. Convergence: Batgirl #1, however, is just the second time that Cass has been seen in a DC Comic since 2011. Sure, it’s not part of the main continuity since this is all just a vacation from the “real” story lines until June, but still–important stuff for female and Asian-American representation. Stuff that leads into the first thing I want to discuss in terms of the art.

Throughout the pages of this issue, Cass is drawn with blue eyes. Cassandra Cain is the daughter of Lady Shiva and David Cain. Lady Shiva is Chinese and David Cain is White, making Cass herself mixed. While it’s possible for Cass to be blue-eyed, it is highly improbable given not only her racial background–but also how she’s been drawn since her inception. Some might say that changing her eye color isn’t a big deal and has nothing to do with her character, but blue eyes have long been used as signifiers of whiteness. This is a concept acknowledged and discussed everywhere from Toni Morrison’s The Bluest Eye, to the Aryan ideal, to the way that celebrities like actor and activist Jesse Williams are perceived. There are many people of color who have blue eyes, but it would be irresponsible (and a little asinine) to deny the way that their depiction functions in Western society. I doubt that the art team specifically intended to whitewash Cass, just like I doubt the Marvel editor in Ronald Wimberley’s fantastic short comic “Lighten Up” specifically intended to do something similar to a character of color–but that was indeed the effect and one that does, no matter what anyone says, shape how I and thousands of other readers of varying ethnic backgrounds read this work. It’s something that could have been avoided with a bit of research and, in all honesty, more involvement of people of color in the artistic and editorial process.

Beyond the social repercussions, I found the art to be inconsistent. Characters’ faces would look somewhat different from one panel to the next. Some of that could be explained by varying angles, but it happened so frequently that I’m not entirely convinced. Much of it had to do with the level of detail at any given moment. Sometimes, in a close-up, we would get a more artistically-rendered version of, say, Stephanie’s face, and then sometimes even on the same page, when we’re at a similar distance, we now have a depiction that leans in a more realistic direction. There’s even varying levels of detail even within a panel; sometimes characters get proper faces and sometimes they don’t. I’m happy to read stylized work as much as I am hyperrealistic versions–I love Babs Tarr and Jae Lee as much as I do Lee Bermejo and Alex Ross–but consistency and clear intention goes a long way in terms of giving the reader confidence in the work and those were very much lacking in this particular issue.

A lot of the story is a quick refresher for readers who don’t know the highlights of Stephanie’s background and much of it takes place via an extensive flashback. I’m still undecided about whether this was the most effective use of pages given that this story has to wrap-up in two issues. I see the benefit for readers who don’t know much about Steph’s history, but I’m inclined to think not only that you don’t need to know everything about her for the story to succeed. Moreover, I think that there was likely a way to carry the main story further while still referring to or hinting at the details that were driven home in the flashback.

That being said, there were quite a few times where the exposition through dialogue was a bit more transparent than I would have liked. We find out that Stephanie is Gotham’s champion through a somewhat awkward outburst aimed at Red Robin Tim Drake. The trigger for the outburst is a bit tenuous and reads more as a reason to explain the situation than it does a genuine emotional reaction. There are also some moments that don’t fully make sense, even after a few reads. Some scene cuts happen a bit too quickly, but the moment that really stands out is an early scene before the flashback. In it, Tim Drake behaves normally at first, but then suddenly starts to act very strange for seemingly no reason. It might be the case that there’s an explanation coming in issue #2, but because so little narrative time is spent with it, it reads more as a mistake/odd characterization rather than an intentional choice.

Still, there were quite a few choices that I liked–ones that I would like to see engaged with more in the regular Batman continuity. I very much appreciated Stephanie’s consideration of what it means to do good and what options people have. She emphasizes that fighting isn’t always the answer and in the Smash-First-Ask-Questions-Later direction that a lot of hero narratives have gone, it’s a concept that’s worth exploring and expanding upon. In particular, my favorite moment and line in the issue–one that I think will stick with me for a while to come–was a note about what it means to even show up to a conflict while in costume. It’s something that translates to a lot of what is happening with American police brutality and asks a very big question about the role of heroes and what their presence can lead to, regardless of their intention. It’s fertile thematic ground that I wish we spent much more time on.

I also appreciated Cass’ characterization. We got to see her deep understanding of body language (admittedly, in a somewhat heavy-handed scene, though it’s a conceptually heavy-handed idea, so I don’t fault the writer) and the lengths she’s willing to go to, if need be. I gave a private whoop at the reminder that Batman once said he would likely lose to her in single combat–a fact that lots of people like to forget. On the other hand, Steph’s characterization wasn’t quite the way I remembered it. Stephanie is more impulsive and leans more in the Jason Todd and Damian Wayne School of Robins, but, given that she’s been away from heroics for over a year, her apprehension and self-doubt is narratively justified. While I would have liked to see more of what I felt made Steph stand out from the rest of the Batfamily, her behavior makes sense.

I will say, though, that I’m not completely happy with one particular scene involving Steph and Cass. I’m not eager to reveal things that might even remotely be considered spoilers, so I’ll just say that there is a moment that I think could be construed as queerbaiting. Yes, it could be a joke. Or it might not be a joke. But the fact that it’s there “but maybe almost” is what gives me pause–especially since it’s almost immediately followed by something that affirms Steph is interested in men (which does not mean she is only interested in men, of course, but it still functions as a heterosexual flag). If there was more time to clearly establish Cassandra and Stephanie’s relationship in the setting, then I think I might have a different reading of it, but as it stands, I am unsure.

All in all, I think time is going to be what makes or breaks this entire Convergence event. These teams have two issues to orient the reader and tell a solid story, which makes their job more difficult than usual. In Convergence: Batgirl #1, too much time is spent orienting us to who Stephanie is when it could be done more efficiently elsewhere. Conversely, too little time is often spent addressing and/or establishing what I assume are the bigger plot elements that will come into play in issue #2. I have higher hopes for the second issue, as most of the backstory has been covered in issue #1 but these flaws, combined with the artistic missteps, made Stephanie and Cass’ return less illustrious than I would have liked.