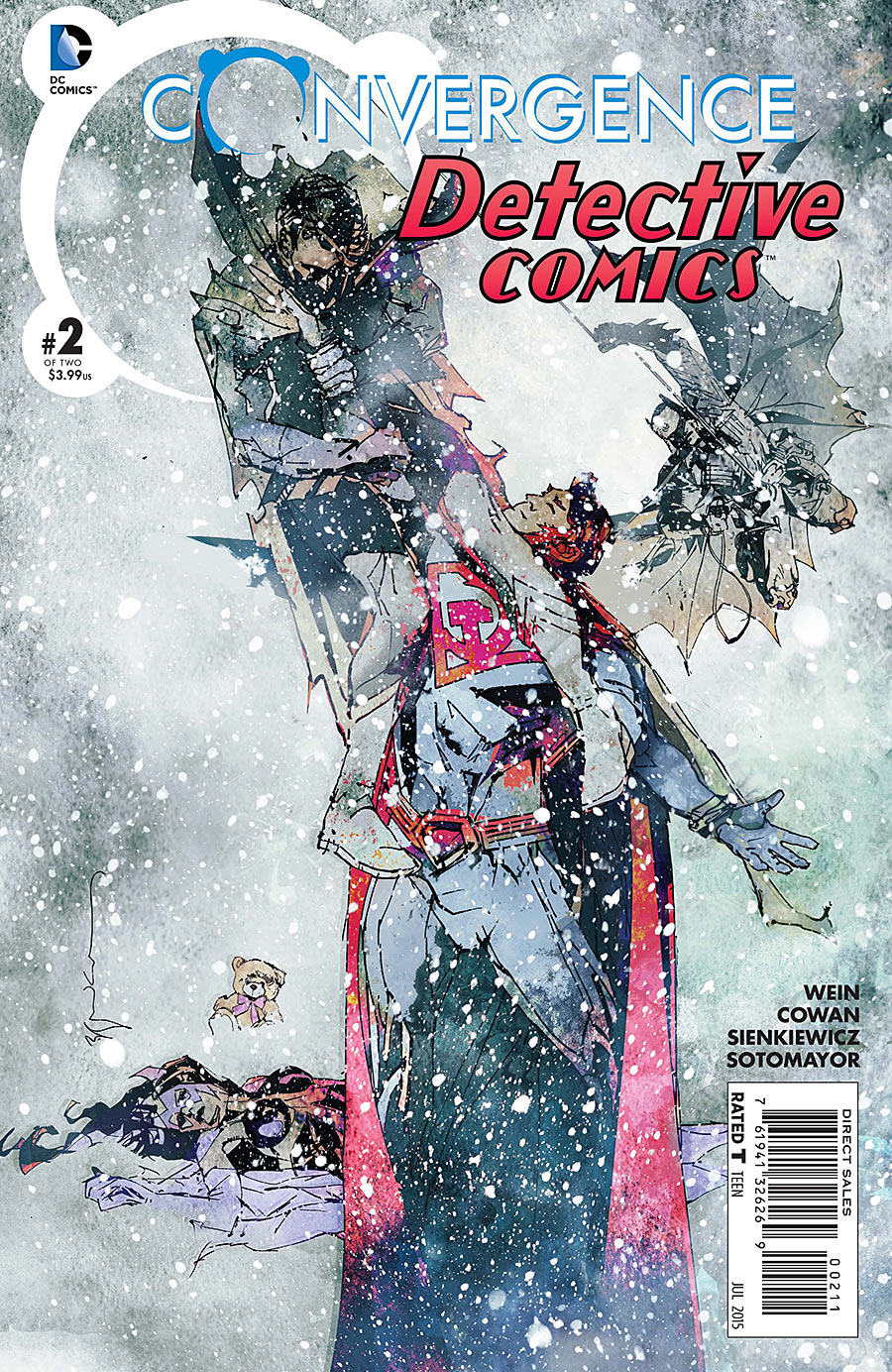 The Earth Two Robin and Huntress may still be mourning their father’s death, but that won’t forestall the face-to-face confrontration with the Red Son Superman. But the real challenge is, what will they do when they come up against the Batman of this world? And is he friend or foe?

In a lot of cases, your mileage is going to vary significantly in regard to how much you like a Convergence mini-series — based almost entirely on when you started reading comics. That’s not to say that a one-on-one experience with the era from which a set of characters hailed means automatic enjoyment. It could easily work against you as a reader too, if a book fails to measure up to the memory of a cherished story.

In that sense, it’s very difficult to review any of these stories with even a hint of objectivity (if such a thing even exists in comic book reviews), but in the case of Detective Comics #2, there are some hard truths.

One, the line work by Cowan and Sienkiewicz is really powerful stuff, no matter what the subject matter. There’s a rawness to their detail and choreography that I usually don’t enjoy from other artists, but from this pair, it shines with emotion. Expressions of shock from the Huntress and determination from Superman really get at the emotional content behind this otherwise constructed confrontation.

Some of the panel shots are not as impressive when the camera is pulled out and figures are depicted from a greater distance, but for all those images that narrow in on the face or other detail, the work conveys the drama of the situation really strongly.

Wein’s overall plot isn’t much to hang a story on, but the smaller moments are what make this issue compelling. The ask of Batman from the Huntress is an exceptionally well handled moment, as is most of Superman’s interactions with the pair — being, oddly enough, the man with the most patience in the room at all times.

At first, I was a little taken aback by Robin’s use of the word “Communist” as derogatory, which is a little anachronistic by today’s standards. But that actually goes to the fact that these characters are meant to be lifted from the late 1970s/early 1980s, pre-fall of Russia, when America is still in the midst of the Cold War. Given that, it’s a much more interesting read in consideration of each side’s impressions of one another. I wish that had been delved into more deeply, to be honest.

At the end of the day, my connection to the dynamic duo of Huntress and Robin is pretty far removed, but it was nice to see one piece of major resolution come out of the story for those fans of the original. It was even nicer to see that that moment wasn’t the be-all and end-all for the story’s success. That alone puts Convergence: Detective Comics #2 a bit ahead of some other offerings this week.