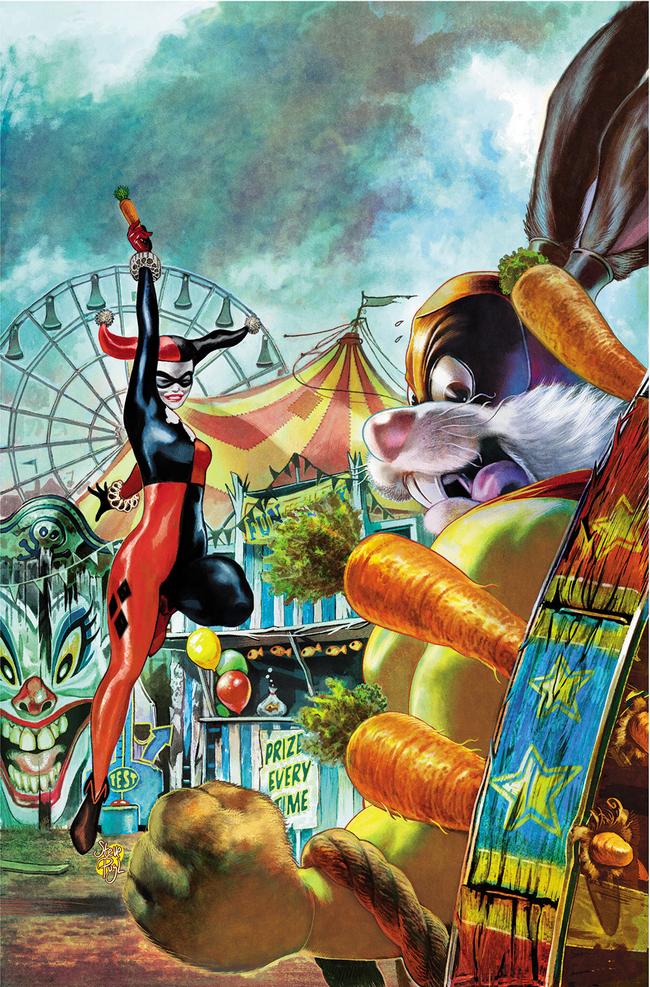 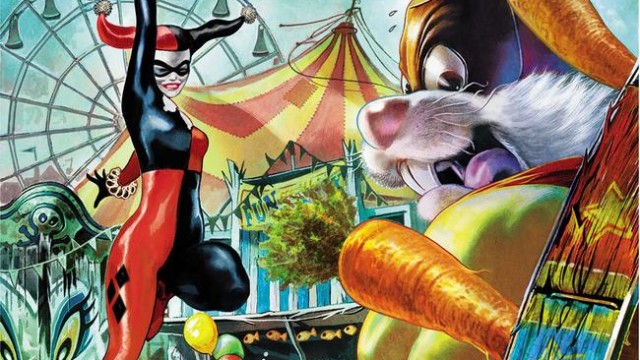 In the first issue, we get a peek inside the window of Harley’s mind- and in this ‘verse, it’s heavily medicated and over-muddled with mild hallucinations and other fun little oddities. Harley’s gone straight, or so it seems, sans- joker and clown girl costume alike. She’s even got herself a new boyfriend…and he’s a cop! Yes, ladies and gentlemen, Harley Quinn is taking antipsychotics and making whoopee with a GCPD boy in blue. Just when you think things couldn’t get any weirder (even for an HQ comic) the remaining Gotham City Sirens, Catwoman and Poison Ivy, show up to get their lovable, unstable, old pal ready to square off against Captain Carrot (yes, he is a rabbit in a cape) . Remember, Convergence is all about this mysterious figure pitting heroes against each other that leaves a very Hunger Games taste in your mouth. In fact, issue number one actually references the Hunger Games.

Now, in issue number two when Harley actually faces off against the noble Cap Carrot, it’s all slapstick fun and games- we see none of the darker, more serious tones from the first issue. Where in number one we dealt with some darker themes (mental illness, injury, PTSD, complicated relationships), in this issue we can dry our tears with some comedic relief. Everybody loves Harley a little bit more when she’s off her meds and able to run amok with her bad crazy self, right? Here we see it done much differently than her current, regular title. The tone is familiar, setting the battle scene at a theme park with tons of bright colors and wacky props to utilize every facet of Harley’s adorable insanity. Steve Pugh has an obvious understanding and maybe even love for America’s deranged sweetheart, bringing us back to a more vintage Harley that many of us grew up with. John Dell and Phill Winslade complete this circus with a flash and a bang in the way of artwork. Only this concoction of color and intricate facial expressions could have rocketed this comic to its rightful place amongst convergence’s best stories.

The only downside to it all is that we are left hanging with so many questions. What’s next for the Sirens? What becomes of Harley’s copper buttoned beau? Let’s just hope that it all gets wrapped up somehow in the end, somewhere.