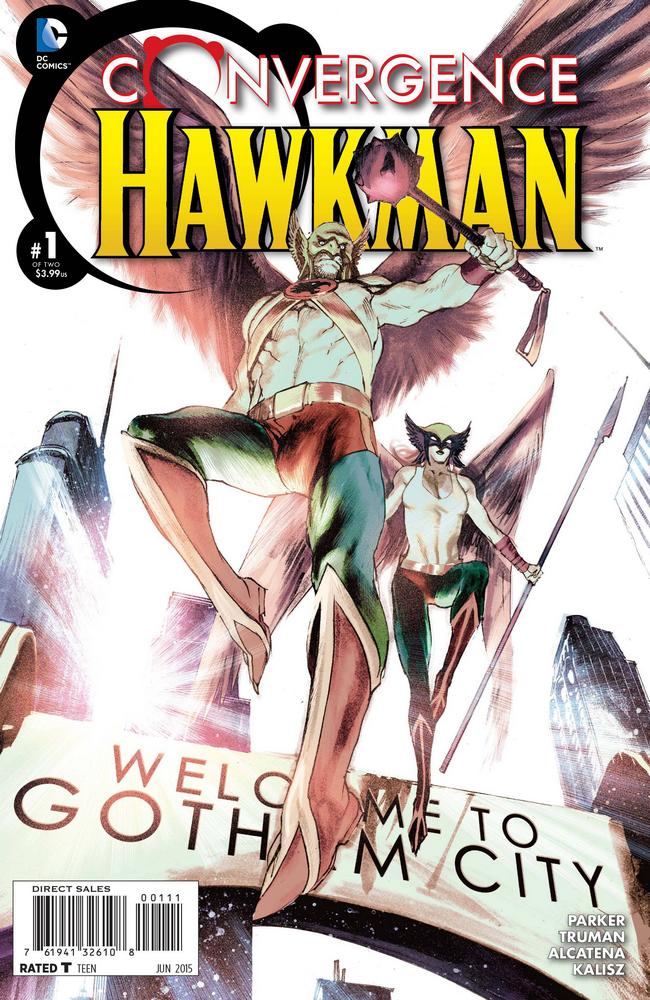 Convergence heads back to Gotham as Parker & Truman bring readers the classic Hawkman and Hawkwoman that we haven’t seen in quite awhile.

This story has a very classic feel, both in Parker’s writing style and certainly in Truman’s artwork. Truman’s work, with inks by Enrique Alcatena, feels like it is pulled straight out of an 80s comic, and I don’t mean that as a negative. The style fits this story very well, hitting all the nostalgia buttons without simply being out of date. There aren’t a ton of jaw dropping pages, but the art in the issue just works, in a similar way that Batman ’66 (also written by Parker) captures the classic elements of the time without feeling terribly dated. Hawkman fans will certainly feel taken back in time by Truman’s Hawkman and Hawkwoman, and I was impressed by how well this art team paid homage to the art style of this era of Convergence without it being a complete mess.

Jeff Parker’s writing is a huge element of the success of this issue, as he also does an uncanny job of writing in a manner that feels current and classic simultaneously. He writes dialogue and story beats that, if written by others, might feel very cheesy and lame, but they don’t by Parker’s hand. They feel completely in their proper place and while I worried that the whole “dome” situation in Convergence might start to feel tired, there are some interesting elements in play in this issue that shake things up a bit. I’m certainly going to be back for the second issue, and I say that as someone who has no nostalgic tie to this era of comics at all. Convergence: Hawkman was just that entertaining.

I’m fully in for this whole Convergence concept and I’m finding this very fun, so Convergence: Hawkman was right up my alley. The look at these classic characters in this interesting mash-up is yielding some fun stories to explore and I think Parker and Truman set a great tone in this Hawkman issue.