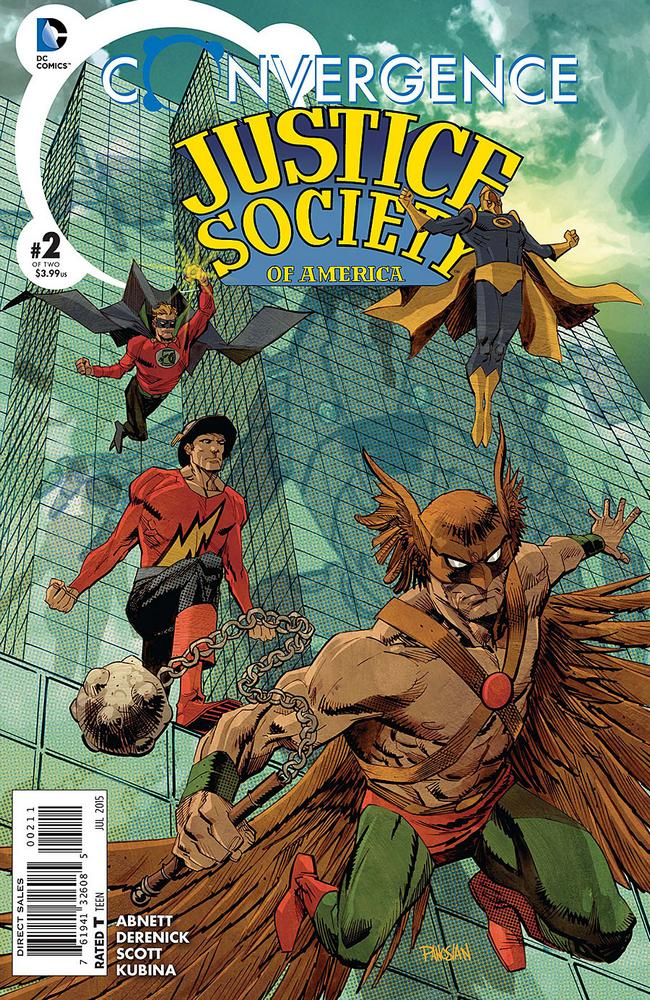 The old dogs are back in business doing what they do best: fighting the good fight and saving people. The Justice Society of America heads into battle one last time in the second issue of this Convergence mini.

Abnett writes these characters really well, giving them unique voices and a different perspective than all the other characters pulled into Convergence. Under the dome, these characters aged without their powers and, all of a sudden they are vibrant and retain their youth. While I’m not exactly past my prime, so to speak, I can imagine how freeing it would be to shake off the rust of age and head back to a time when you could, quite literally fly or run at unimaginable speeds. These characters have the wisdom that comes with age and Abnett captures that in their voices well. The threat they face is rather basic, but this comic isn’t about the foe, or Convergence, really. It’s about these characters getting a chance to head back to their glory days and, while they are trying to save people from the foe, they are secretly loving every second of it. Their excitement and enthusiasm about having their powers back grows as the issue progresses and I found the subtleties in the dialogue quite enjoyable.

The artwork by Tom Derenick is solid, with some great full page splash images and some detailed smaller panels that show these characters well. There are times, especially when the characters are older and out of costume, that it is difficult to tell who is who, but at that point I’m not sure it overly matters. Derenick’s style captures the classic feel of these characters with modern storytelling, and he walks a fine line of having these characters look like their old-time selves without being comical. His Dr. Fate and Hawkman are particularly well penciled, and there are some solid action sequences in this book. I think he captured the tone of the team well, and his artwork works with Abnett’s script nicely.

Convergence: Justice Society Of America #2 wraps up this two issue mini nicely and drives home what makes these JSA characters special. This is an entertaining issue and I certainly wouldn’t say no to seeing this kind of take on the characters more often. They add a richness and legacy to the DCU that is something special.