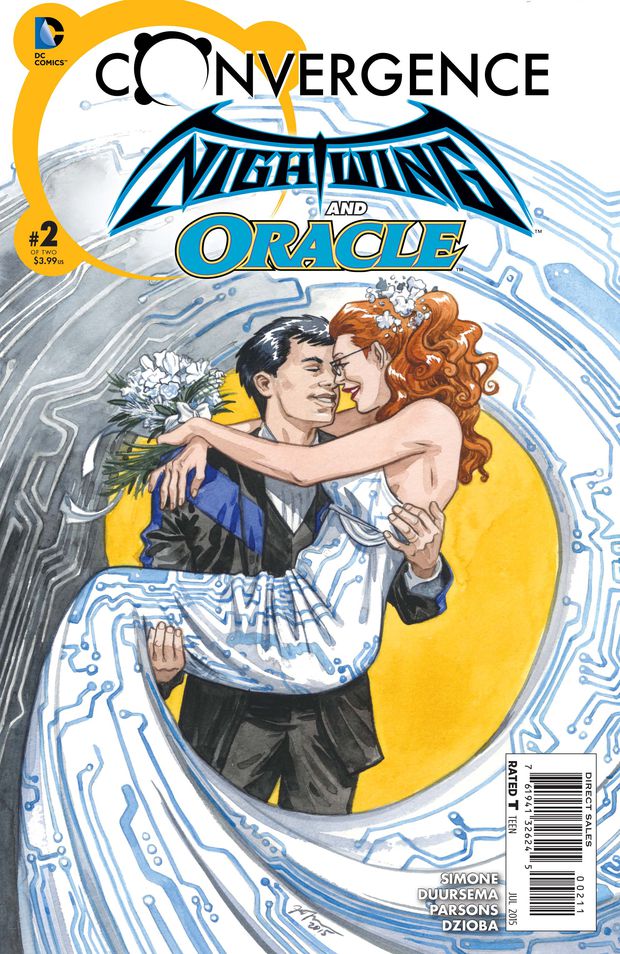 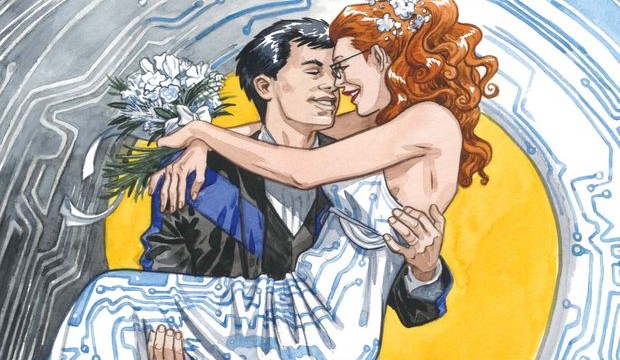 The dome is down. The players have been engaged. The battle between Nightwing and Oracle (and someone else!) and Hawkman and Hawkwoman of the Flashpoint Universe concludes. But is it happy endings for everyone involved?

Thankfully, the answer is actually yes.

As promised by Jill Thompson’s gorgeous cover, we do get to see the Dick Grayson and Barbara Gordon of the 1995-2011 universe walk down the aisle. And that’s a sweet end to their tale to be sure. But the real meat of the issue is in the battle scenes, believe it or not. The creative team has given us one of the more thoughtful and beautifully executed sequences in all the Convergence books so far.

It would have been so easy to make the Hawkwoman just some formless baddie, but Simone brings an enormous amount of character to her in very short time. It actually makes me desperately want to see a Hawkwoman book from this creative team, because Shayera here is so much like Red Sonja (who Simone just nails every single issue she writes). The potential in launching that character into the DC Universe sort of like this — well, you have the pitch in 20 pages right here, honestly.

Of course, the true star of the action, as it should be, is Barbara, who enters the fray with technological cards up her sleeve AND a pair of escrima sticks that she’s not afraid to use. Oracle, Batgirl, plain old Barbara Gordon — she’s a warrior, and we see that here clearly. Her passion for saving the city, her love for Grayson, her friendships, and her frank tenacity all radiate off of her character like sunshine. Simone’s voice is pitch perfect, which should surprise no one and delight all.

It also doesn’t hurt to have an absolute master working on the art for this all-too-brief mini-series. Jan Duursema gives us a fantastically detailed, but still super-emotive, set of pages that capture the confrontations within really precisely. The battle between the two women is exciting, the facial expressions really telling, and overall each one is given the stature she deserves.

I’m particularly fond of the costume design that I presume Duursema orchestrated (since neither of these characters actually appear in Flashpoint) for Hawkman and Hawkwoman. We’ve seen a whole lot of Hawk outfits over the years, and this one has a flair of the savage that once again echoes Conan and Red Sonja for me. This is a take on the characters we’ve seen alluded to many times, but never fully implemented. And it’s about time. Kudos to Wes Dzioba’s sandy color palette throughout the book as well. It really helps set the tone for these characters in particular to shine.

A lovely send-off for a set of characters near and dear to my heart, Convergence: Nightwing and Oracle #2 gives us the happy ending we always say we want for our favorite characters, but with enough drama and surprise to make it feel well earned. Simone and Duursema have, for now at least, gotten the last word on this iteration of Dick Grayson and Barbara Gordon, and I’m happy to say, they did both of them mighty proud. My thanks to all involved for the opportunity to see this particular story come to pass. It was more than worth it.