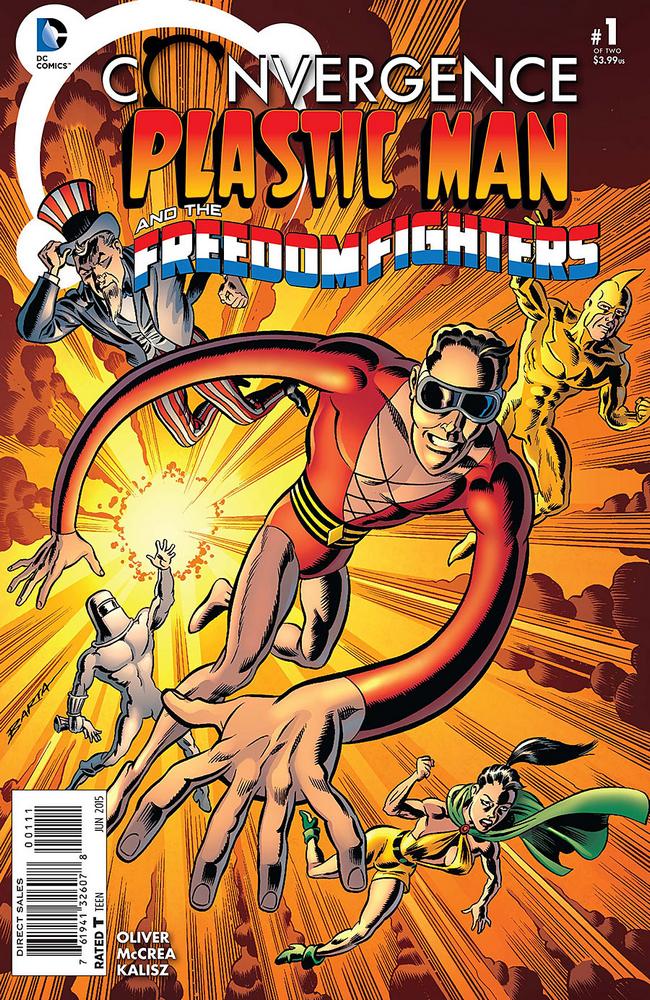 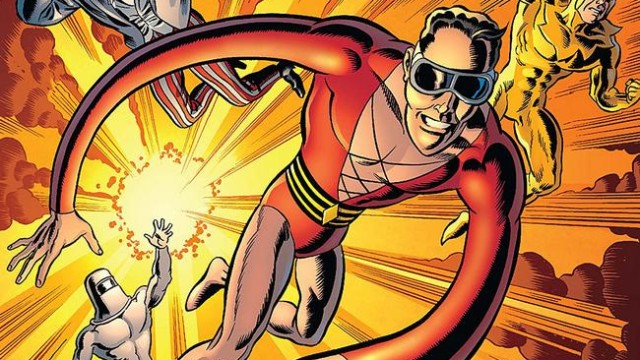 Plastic Man has been pulled into Convergence, certainly some madcap mayhem will follow him? Unfortunately, not all that much as readers get an exposition heavy narrative that is missing the fire and eccentricity you’d expect from a comic with Plastic Man and the Freedom Fighters on the front.

Simon Oliver doesn’t hold back from throwing down information about how Plastic Man and The Freedom Fighters got into their Convergence “situation” as the vast majority of this issue is a Plastic Man voice over. He’s breaking the wall and talking to the reader as is to be expected with the character, but the story is extremely straightforward. The crew is fighting Nazis and even though the dome changes what you’d expect to find in a typical Nazis vs. Freedom Fighters tale, it all feels very bland. There is next to no spark in this story, nothing to set it apart from any other story where Nazis are bad and the “good guys” are good. Plastic Man’s voice is very flat, and overall there is very little energy in this story. When I see Plastic Man I expect some quirk, something I’m not going to find elsewhere and I found there to be very few elements of this story that are unique to Plastic Man and his crew. Oliver’s take on the character is very generic and when the lead character in a book is this flat, the story doesn’t have much of a chance to go anywhere interesting.

The art from John McCrea is just fine. There are some inconsistent parts and, at times, he attempts to breathe some life into Plastic Man, but there wasn’t much here that was astounding, either. It’s one of those cases where a mediocre story is accompanied by some middle-of-the-road artwork and neither half of the equation really saves the comic. The visuals are rather flat, and with such a diverse team of characters I’d expect at least one to visually have some pop, but none of them stole the show.

Convergence: Plastic Man And The Freedom Fighters #1 isn’t a bad comic, but there’s not much to that is exciting, either. It lacks a lot of the spark that many other Convergence tie-ins have had, and I doubt I’ll be revisiting this mini. Plastic Man is a character that can go some crazy places, or at least have some fun, and there’s none to be found in this comic.