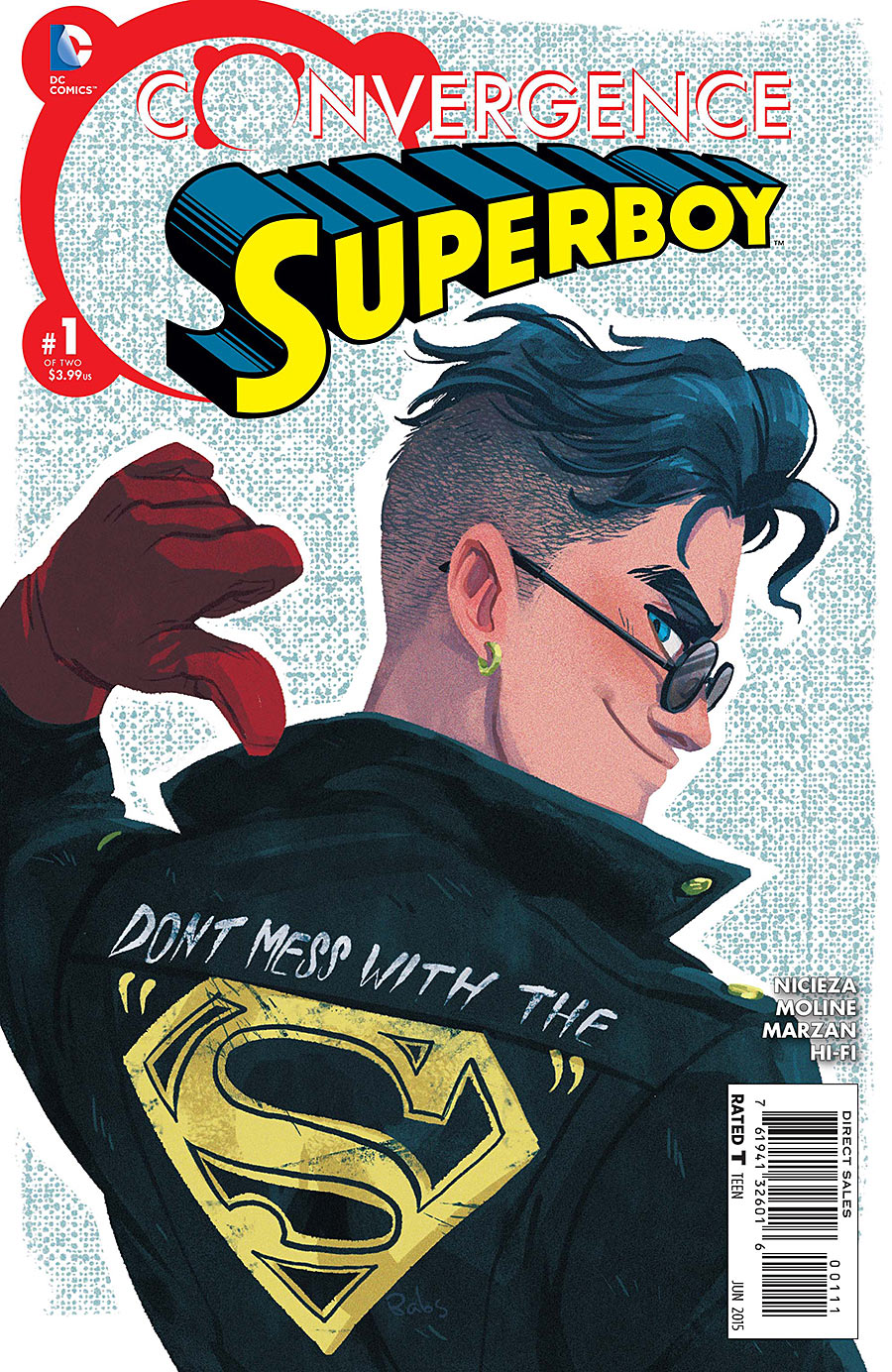 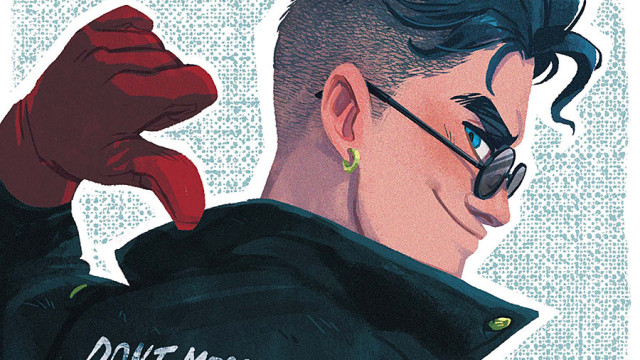 So, here’s the thing.

I fell in love with Connor Kent as he appeared in Geoff Johns’ Teen Titans and was all right with his portrayal in world’s best animated series Young Justice, but guys, 90s-era Superboy brings me so much joy. The undercut I got about a year ago was inspired by him and I am practically bursting at the seams at the idea of cosplaying him in the near future. I say all this so you know where I was when I heard about the plans for Convergence: Superboy #1.

I want to start with Babs Tarr’s cover because, really, it is everything. It perfectly captures what I think is great about Kon-El — the self-confidence, the badassery, the smugness of it all. You can always count on Tarr for top-notch characterization: his expression is perfect and his jacket, even more so.  We already know she does great biker jackets and I think Tarr’s take on Connor’s should really become canon.  It’s going in my cosplay for sure. It sets the mood for the comic and reminds you who the Superboy of that era was, before you even open up the comic. Excellent work.

The art style really brought me back to the nineties, but in a pleasant, nostalgic way. There were a few times that I wanted just a touch more detail, but the artistic team did really well with Connor overall. The way he holds himself, his facial expressions, his style of dress — all characterize him very nicely. It’s clear this team knows who Connor is and what makes him great; their ability to achieve that is striking and seems almost effortless.

I’m also a fan of how the team portrays superpowers. Connor’s X-ray vision is shown simply but clearly, not unlike his flight. There are other superpowered beings who appear in the issue too and, rather than saying who they are, I’ll say that I’m similarly impressed — if not, moreso — by how their abilities were conveyed.

I will say, though: a few times I was a little less sure about his hair. Most of the time, it was drawn in such a way that made Connor look attractive and edgy–in case it wasn’t transparently obvious, undercuts are back in again–but sometimes he just looked a little ridiculous. Of course, that’s totally fine since nineties-era Superboy is a little ridiculous, but the fan in me wanted that undercut to look good, you know?

And the place I wanted a little more detail was the moment you first see Connor back in his Superboy uniform. I wanted to see his face and connect with his joy as deeply as possible, but for some reason the team opted for a more stylized depiction of his expression.

The writing for the issue was shaky. Voice-over is a tricky technique to use well and, while I understand the motivation behind having Dubbilex give us some background, I’m not sure it should have gone on for as long as it did.

I will say that we were effectively brought to speed about who Connor was and what his current struggles were in a manner that was neither heavy-handed nor overly expositional–but once Connor left Cadmus Labs, I didn’t know why we were still getting narration from Dubbilex. Yes, he’s a telepath and yes, he’s a suitable candidate in terms of describing things remotely, but it was very strange to read his thoughts despite the fact that we were following Connor.

It was an effective technique in the opening scenes, but lost its push once Dubbilex was removed from the action and only served to distance us more from our main character. An omniscient narrator might have been better, but really, I just wanted to be with Connor in the moment and let him tell me (or even better, show me) what I needed to know without additional interference.

The comic also suffers for transitions, though I think this is part and parcel of the pressure that comes with writing a two-issue story. Things happen much faster than they ought and aren’t handled very artfully. Connor becoming Superboy again is a matter of an ominous voice in the distance and a costume change. His foes appear only two pages later and engage him almost immediately. We’ve gone from a calm and quiet day in Metropolis to everything turned on its head across three pages.

This is comics and chaos by definition can happen at any time, but it was largely too much and too soon. I would rather have seen him get his powers back in this issue and fight in the next than achieving all that in the space of one issue. I’m less likely to believe it and it’s the emotional journey that’s going to stay with me, not the plot — and that speaks to what I did like about the issue.

I’ll always love scenes with Connor standing at the base of a Superman statue and I think his dialogue through the issue is largely on point. It’s hard to strike a believable and engaging balance between bravado and vulnerability. Sassy, quippy, devil-may-care characters can begin to grate when they only hit a single note, but even within the small confines of this issue, we manage to hit several: self-doubt, self-confidence, hurt, jealousy, inadequacy, unbridled joy. The gamut of emotion is all there, and that’s an achievement that most regularly running series don’t manage across an entire arc, never mind 24 pages. And, at the end of the day, it’s the last image of the last page that tells me this team knows Connor through and through.

I liked Convergence: Superboy #1, though I’ll freely admit that that’s my heart talking. The art is fun and really speaks to a style that was common in the nineties, maybe even edging a little in the Archie direction.

And, as I said before, I think the portrayal of Connor, who he is, and why he is that way was carried out with a lot of love and care. I missed this Connor so much and seeing him again, written as perfectly as he was, was enough to set me texting my friends in all caps about the one-and-only 90’s-era-Kon-El. Still, even with the emotional content intact, there were significant missteps at a structural level, in terms of pacing and how the story unfolded which prevent the work from being something I think lots of people will like, rather than something I personally liked and enjoyed because of my pre-existing love for the character.

It’s my hope that these pacing flaws resolve themselves as we enter what I’m guessing is the primary conflict in issue #2 — fix that, and combine it with the spot-on characterization and emotional notes we hit in issue #1, and we’ll have a killer second half on our hands.