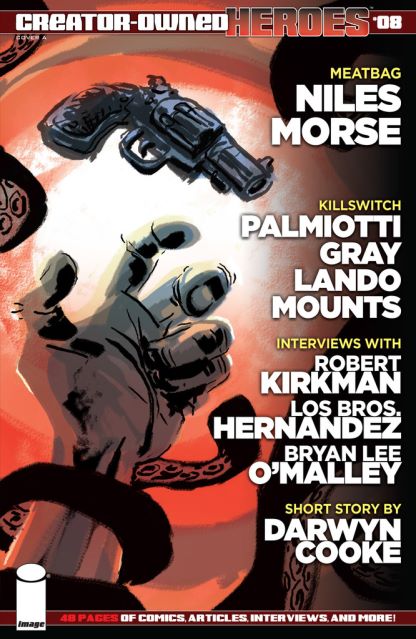 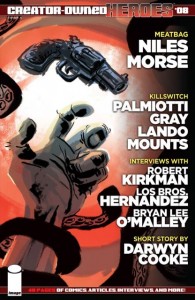 A trio of stories, two finishing their story arcs, fill this issue to overflowing when partnered with the interviews and extras that made this one of the most unique books on the shelves. The amazing four-page short by Darwyn Cooke is the gem of this issue. A story Cooke created as a gift for his wedding guests, The Spirit of the Harbour is a beautiful and elegant piece that showcases the immense story-telling prowess of a true master. That this story replaces what would have been part one of three of a new Cooke story is a bittersweet note.

The concluding chapter of Niles and Morse’s Meatbag is a fun noir romp. Morse brings a bit of later Eisner-flavour to the art and it works very well. Storywise it is not any great ground-breaking for Niles in that it is the EC horror style tale he often brings to anthologies. Those varied influences might sound a mish-mash but somehow it all works out. Given that this story was so brief, it might be a good idea to grab the issues — as it may not end up collected anytime soon.

Killswitch wraps up with some new twists and turns in part four. The art by Lando and Mounts feels a bit rushed with the backgrounds all but disappearing for the bulk of the story. Strangely they trade detail in the panels for a topless fight scene. Perhaps the script got mixed up with one of Palmiotti’s “Sexy Monday” posts. The story isn’t very memorable, but it’s a capably crafted, if odd, tale.

The anthology format continues to struggle and there will be talk for some time to come about what worked and didn’t from this attempt. That it hits the shelves the same week as the announcement that DC Universe Presents has been cut is worth noting. There seems little strength in the market to have a masthead carry a book through a cycle of creators and characters. More’s the pity.

Keith is the co-host of the award-eligible podcast We Talk Comics.