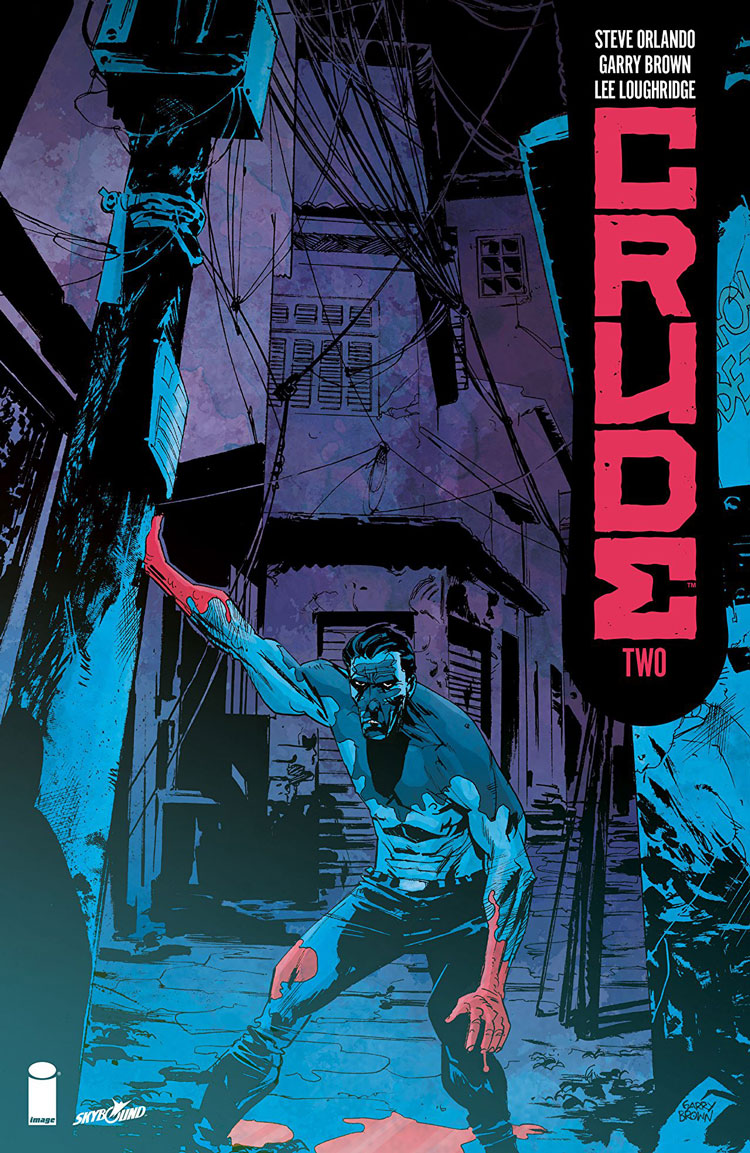 “This place is an anus.”

The world of Blackstone expands and political factions start to unfold as Piotr Petrovich starts to get in deep with the iron grip that seeks to maintain control over the inhabitants of this no man’s land.

That’s a lot of what Crude seems to be about. This idea of resistance as the deepest nature of one’s being in one sense. Oil can’t help but maintain its form, its viscosity, even when flooded out by the overwhelming ocean of control, violence, and lies. Oil always rises to the top, always beads on the surface, even if it means it’s vulnerable to the sunlight.

Kiril Petrovich was oil to the world he imagined his father inhabited. Piotr Petrovich wanted so desperately to be water — to be dissolved in the ocean of a banal world — but he too is oil, in the most obvious ways. As a killer. As a defender. As a man unable to accept his son’s death without consequence.

Garry Brown keeps replaying this motif throughout the book, particularly in the exquisite fight sequence where he has Piotr engage with Petropinnacle by beating them at their own game — covering his body with the very crude they exploit, and then washing it away in a moment of naked vulnerability. It’s a design feature that’s carried throughout the book, even in the cover wrap, where we get this classic oil and water blend, a dirty, chaotic swirl that makes my stomach cringe just in the right way to reflect Piotr’s own regrets and motivations.

The entire art team reinforces these themes writer Steve Orlando lays out so effectively in an issue much more concerned with action and exposition than reflection or character study (as with #1), with colorist Lee Loughridge making perhaps the greatest contribution. Loughridge employs a gorgeously dingy palette, true, but the texture effects he’s giving every city and dock scene is what’s driving the mood of the title to date.

The polluted air, the soot stained concrete, and skin that almost reads as pocked in places all benefit from Loughridge’s trademark sponge style of layering. It doesn’t just give weight to everything it touches, from fabric to the air itself, but it imparts age, wear, and a dirty film that you can’t quite wash off as you read.

Crude is smart concept, no doubt. But it’s real victory is in how the idea of a man desperate to make up for something that can never be undone, the death of his son who he never really knew, is translated into form by its entire creative team. Orlando, Brown, and Loughridge in particular are working in harmony so effectively to deliver this tale that the moments that stand out — “New in Town” and Piotr’s nude rinse scene — are “merely” cherries on top of an exquisitely crafted piece of literature.

Crude may be all about oil and water, but creatively? This book blends seamlessly.