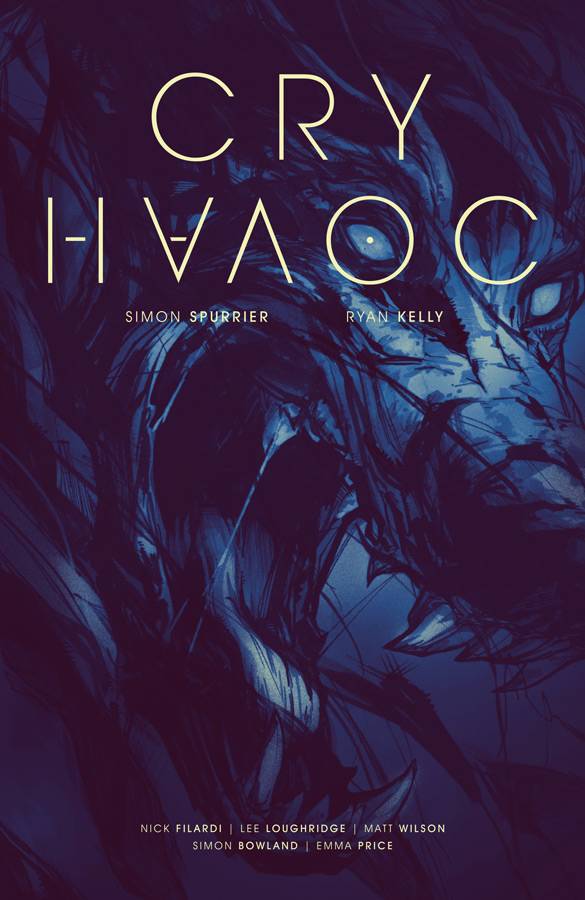 Look, if I could turn into a hot lycanthrope-like musician, I just might okay? And why is this a question? Well, Cry Havoc #1, of course! This is a brand new series from Simon Spurrier and Ryan Kelly with a tag team of incredible colorists (Nick Filardi, Lee Loughridge, and Matt Wilson) and letters by Simon Bowland from Image Comics. Should you buy it? The short — uh…duh. Yes, you should.

Cry Havoc is a little book that stormed the solicitations with a preview that included the sentence “It’s not about a lesbian werewolf who goes to war — except it is.” With that, I was hooked. Now holding the book in my hands, I’m even more ready to plunge into this series. Cry Havoc follows Lou, a British musician with a zookeeper girlfriend who is attacked by a wolf-something and given werewolf-like powers. This book bounces back between, as they call it, the end and the beginning. At some point, and we don’t quite yet know why, Lou decides to rid herself of the beast, a promise to be fulfilled by her participation in a mercenary military sent into Afghanistan to take down another woman imbued with some massive werewolf-like powers. We’re also treated to the inevitable end, right at the start of the issue no less, where Lou has been captured by the person she is sent to take down.

Needless to say, there’s a whole lot of in-between left to unfurl. Simon Spurrier has managed to weave such an interesting tale with this first issue. He’s created a powerhouse character who I desperately want to know more about and strong story-line with plenty of room for growth in all directions. I’m probably exactly the kind of person Spurrier hoped to attract with that solicit line, and even if that hadn’t worked and I just picked up a copy off the shelf, I’m certain I’d have been just as excited for this series after the opening pages. This first issue has such a perfect blend of highs and lows. We get wonderful relationship moments, some pretty ferocious action (though I’m sure that will ramp up more later), and the overall premise is packaged neatly for readers to consume. The dialogue is snappy (albeit, sometimes a little cheesy between Lou and her girlfriend) and the cast of characters is well-defined early on, making the time-jumpy terrain somehow easy to navigate.

Cry Havoc is illustrated so incredibly beautifully. This is the first thing with Ryan Kelly art that I’ve read, and needless to say, I’ll be tracking down more. Everything about this issue flows so well from an art perspective. The characters are easy to discern from page to page. The action moves gracefully from panel to panel. The character designs are interesting and extremely pleasing to the eye. I love the way Kelly manages expressions, he has a way of capturing the subtleties of eyes and mouths. This book is dripping with emotion. Cry Havoc has a wide array of talent as well with their dynamic colorist team. Each artist tackled a different stage of the book (as denoted in the credits: London by Nick Filardi, The Red Place by Lee Loughridge, and Afghanistan by Matt Wilson). Despite the variety of colorists, the overall tone of the book is steady. Every page is colored beautifully, providing just the right amounts of light and darks to keep the energy of this book up while not ignoring its dark undertones. For having three colorists, this book is cohesively gorgeous. As usual, Simon Bowland letters with precision and consistency, adding an overall aesthetic appeal to the story-telling.

I’m just going to sit here and wait now for issue two. Cry Havoc is a powerful story with breathtaking visuals. I could not be more pleased with how this series is shaping up after only one issue. I love the premise, I adore the characters, and I was on the edge of my seat the entire time. If anyone needs pointers about what a fantastic comic book should look like, look no further than Cry Havoc.