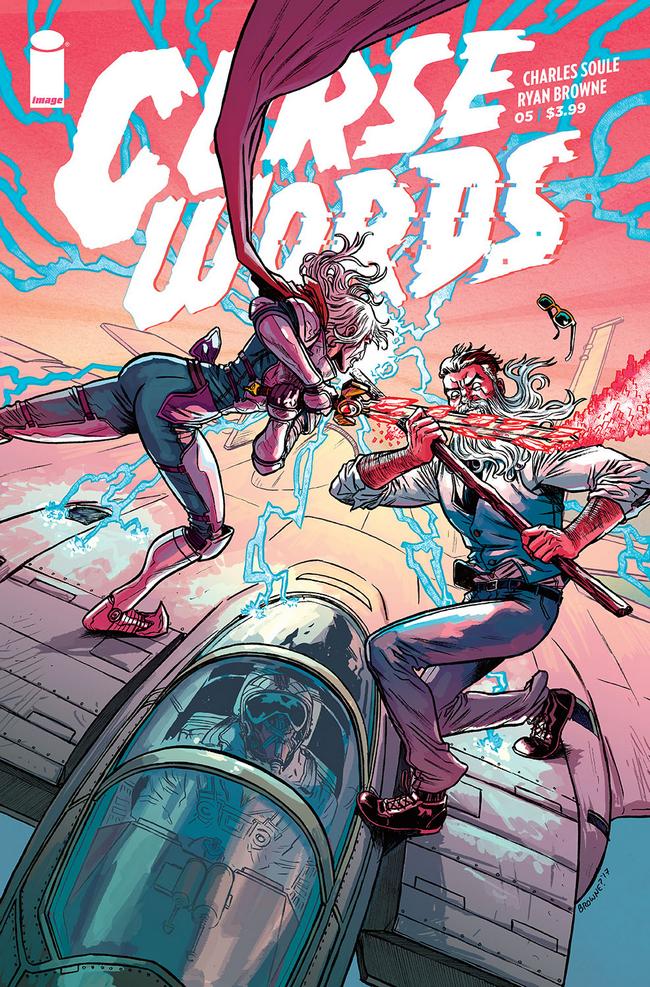 What happens in Vegas stays in Vegas? Wizord fights an assassin over the skies of Vegas but there is little hope that the Vegas adage will hold true this time. This issue is the final part of the first story arc and it goes out with a bang. It’s an action-packed story that gives readers a number of surprising reveals in an entertaining read.

Curse Words continues to get better and better with each issue and shows little sign of slowing down. Charles Soule’s world that he has created is slightly reminiscent of Douglas Adams’ Earth in that it’s people handle the appearance of fantastic creatures and events in stride. It’s just another day of epic wizard battles in the skies. Narration occasionally appears in the form of social media posts by onlookers or the news media as they report on the extraordinary events that are now like Hollywood celebrity spotting. This embracing of Wizord and the world he brings with him is part of the fun of the series.

As much fun as the absurdness of it all is, there are a number of important events that happens as well. The battle between Wizord and Ruby Stitches continues in this issue and turns into a high stakes struggle to the finish. The physical battle that the two are waging is not as important, though, as the emotional one that Soule gives us as Wizord struggles to convince Ruby of some truths. The relationship that is revealed between the two is impactful both to them and to the reader. These reveals make the fight so much more serious as we discover a passion that fuels Ruby’s mission. The story also gives us an unexpected look into Wizord’s backstory that makes him into a more relatable person and less of a fantastical wizard. What happens in the end will have lasting effects for Curse Words in coming issues.

The art work for Curse Words is about as fun as the book is. Browne makes a lot of unique choices for panel layout and design that intrigue the reader’s eyes. It fits perfectly for the off-kilter nature of the book and flows kinetically along with the action of the battles. The battle scenes are drawn superbly with lots of movement captured in each panel. A couple of the larger panels are especially epic in nature during the battle, and the reader can almost feel the sizzle of magic pop around them. Browne does a great job at expressing the rage filled emotion that most of the characters have throughout this issue. He gives the reader lots of images of teeth grinding, yelling, and tensed faces as the two wizards struggle against each other. There is rarely a time when the character’s faces are not full of emotion. His use of colors really stand out throughout the book. He uses a magical fantasy type palette to color everything even things in the “real world.” He also does a great job with highlights in this book. There is a lot of magic flying around and he makes sure to show it being reflected on the objects around it. Towards the end of the book we get a nice two page spread of the Hole World that looks awesome. There are lots of interesting creatures and architecture to take in on that spread.

Overall, Curse Words was and is always a great read. Fun, action, and wizards…what more could you ask for. Definitely pick up this issue even if you aren’t caught up with the series. There is enough here to still enjoy it. The reveals made here will be important in the next story arc for sure.