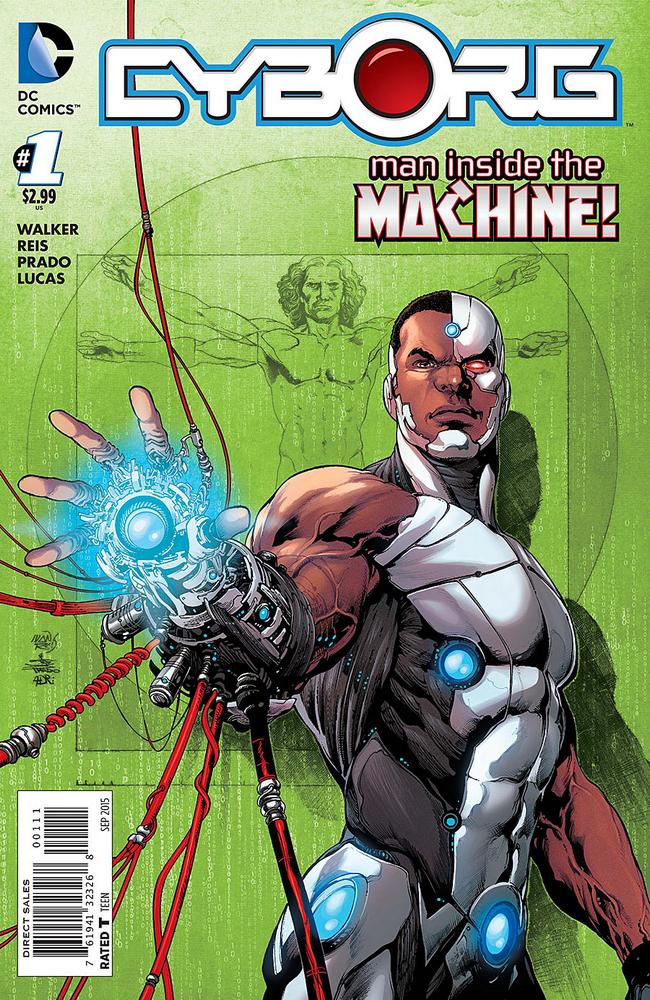 In his own ongoing series at last, Cyborg is experiencing a transformation anew. But whom will he turn to for help? Welcome to a brand new set of adventures for the Justice League’s cybernetic juggernaut and tech genius. Here’s hoping he survives the arrival of the Technosapiens to enjoy it.

There are some really smart choices going into this series that really show the commitment DC has to Cyborg’s success. An eight-page preview featuring his high profile colleagues in the Justice League. The art team that contributed to that book’s blinding success. That sort of consistency in vision and — let’s face it — absolutely stunning quality are gigantic bonuses in the launch of a character who’s never had his own ongoing series.

But the part of this equation that I didn’t anticipate, that factor shining brightest for Cyborg’s future as a solo star, is the script from David F. Walker. Walker has taken everything that we’ve loved about Cyborg — from the pages of the Justice League and going so far back as the post-teenage days of the New Titans — and brought it to bear in a fresh and honest-feeling manner. This is no angry teen, conflicted over the crisis that led to his super-heroic condition. Victor Stone is mature, warm, and despite his concerns over the state of his body, very sure of who and what he is.

The interaction Walker develops between Victor and Sarah Charles most of all feels like the honest connection that will root the character moving forward into an ongoing. Yes, the camaraderie of the Justice League, particularly with Shazam, is welcomed. And yes, the tension between his father’s interests and Victor’s expectations (the inverse to their relationship pre-accident) is a fascinating dynamic to watch on the page. But Sarah and Vic have a rapport that every leading character needs to be successful. Walker putting this at the center of the book from practically page one is a strong measure of what we can expect in months (and years) to come.

And Reis delivers on his half of that equation, giving us some beautifully emotional moments in facial expressions and body language that we really didn’t have an opportunity to see on his work on Justice League (or even Aquaman). The look his Victor gives Sarah (or really, the reader) at one point in the narrative is so deeply inviting that you have to sit back and be amazed at Reis and inker Joe Prado’s range.

Action scenes are tight, as they were in the eight-page preview, but these relatively quiet moments — Vic and Sarah, the conflict with the protestors, even Silas’s oblivious musings — are really where the artists are hitting home.

If there’s any fault to be found in the issue, frankly, it’s just in the moments of developing the villains, these Tekbreakers and Technosapians. I can’t quite figure out who’s the antagonist and where they end and the other begins. I suspect it will all become quite clear as they narrow in on Victor in the next 30 days, but in the meantime, it’s a little blurry to me narratively and artistically.

But quite honestly, that’s a minor quibble in an otherwise stellar introduction to the next big event in Cyborg’s career. We’ve followed him for 35 years and that it took this long to see an ongoing for the man, I’ll never understand. But what I do know is that with Walker, Reis, and Prado at the helm, there’s no question it’s going to be epic. They’ve already done Vic Stone justice. I’m on the edge of my seat to see what comes next.