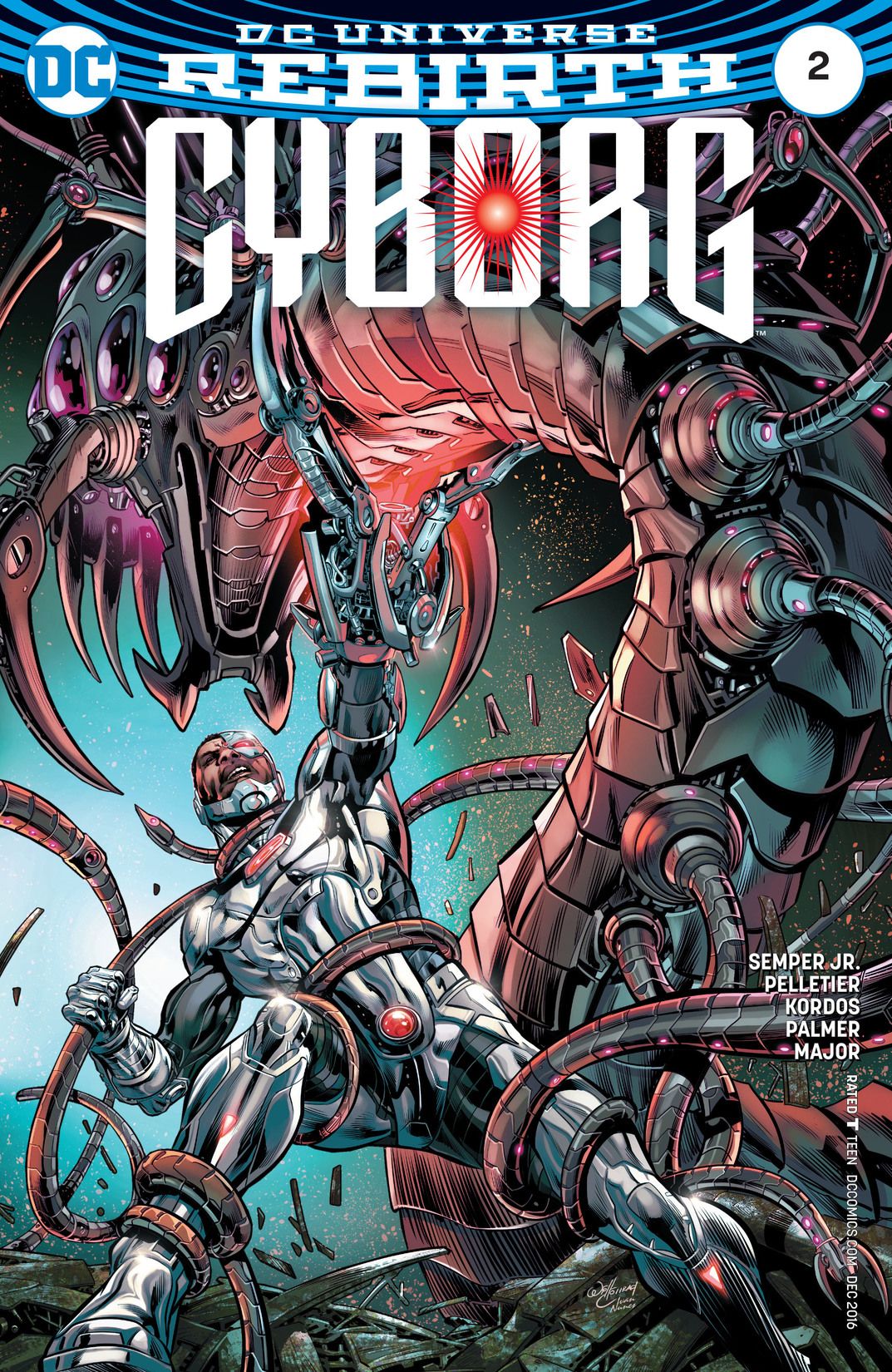 After the last issue’s disastrous emergence of a new villain called Kilg%re threatening Victor and Sarah immediate vicinity, the second issue promises to be a cybernetic battle unlike any other!

Last issue, we saw Victor dealing with a crisis of self and questioning if he was really human or just a husk that took the remains of a human body and is now a computer. He has no time to ponder the bigger questions Semper lays out, but in its place we’re treated to a entertaining and layered battle between man and machine.

Being the new character that he is, Kilg%re covers a lot of ground with his dialogue throughout the entire issue. Semper smartly words the way two technology based beings can “read each other’s minds” and discuss what strengths and lessens when dealing with humans and technology. The battle and dramatics are amplified as the battle rages on and Semper, Pelletier, Kordos, and Palmer all work nicely to create a take on Cyborg that can hold his own in this one vs. one battle.

Usage of having the lettering and thought boxes having their own flavor and style fits the issue nicely. As the fight carries on and drags another supporting cast member into the fray, things get hectic for our Hero and the danger for the second issue ensues a tougher uphill challenge than anyone could have imagined.

Semper and Pelletier make great use of the varying heights and location of the battlefield with dialogue to carry us from Point A to Point B. Kilg%re can quote Shakespeare and remain a step above Cyborg all the while leading him into a trap, throwing his humanity, care for humans and himself in the process.  Pelletier, Kordos, Palmer all work together where it suits them best.

The action scenes maintain a sense of weight and clarity. With Cyborg and Kilg%ore being the two draws as far as where your eyes will be drawn, they are kept in top form with no detail of their colors and styles being overlooked. The techno villain even makes a surprise stop to up the ante of the fight being held elsewhere. The end location for the battle holds personal relevance to Victor and it’s here the emotional punch of the book happens in  the last few sequences.

In one sequence, Kilg%re gives our Hero a brief overview of technology and the relationship it holds to humans, including racial points that ring more true to “emancipate us from the human source.” Cyborg continues to persist against his “brother” and fight the good fight. The challenge to save his Dad from Kilg%re requires an insane amount of sacrifice on Victor’s part and his courageous actions go fitting with the inner thoughts during the rescue. Victor throws himself into the fray to save his family and friends and that’s a human quality if there ever was one.

The final few pages detail and grasp the severity of Cyobrg’s sacrifice and his literal decaying but not before his mighty second wind to put a stop to the techno behemoth once and for all. Pelletier is great at capturing the dismantling of Kilg%re in all of it’s glory, partly thanks to Sarah and the rest of STAR Labs adding support where they can. Cyborg wins the battle, but in a cruel last page plot twist…the war is far from over.

Cyborg #2 knocks aside asking the bigger questions in favor of a battle of the tech brothers and soon to be family trouble. The creative team create a grounded approach to Cyborg and his team, capturing otherworldly visuals with bright colors and emotional beats to match the rising territory Semper is creating in the inaugural “rebirth” of Cyborg.