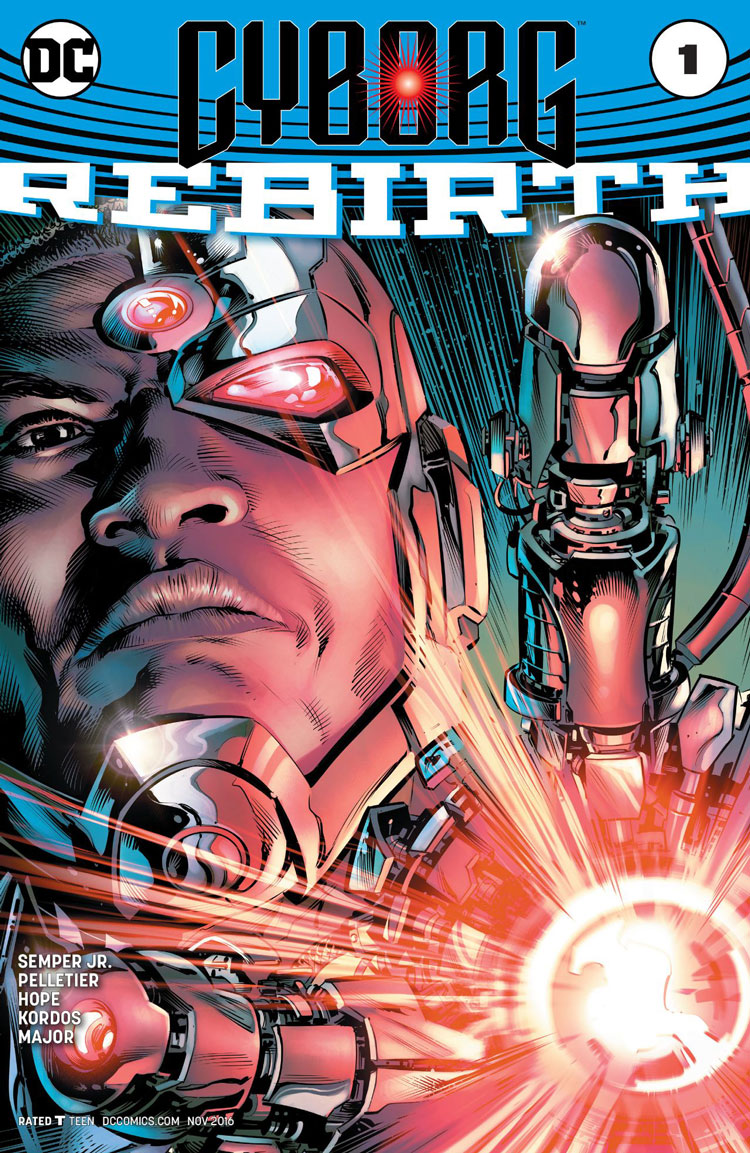 For the second time in as many years, Cyborg gets a new start, bounding into a solo series once more. This time Cyborg: Rebirth serves as the zero issue the David Walker-penned previous volume never had. Also unlike that volume, this series, written by screenwriting veteran John Semper, Jr., seems to have a little more room to grow.

Walker had a solid premise and great intentions, but lost his creative collaborators early, as Ivan Reis and Joe Prado were shifted to another assignment, which has since been revealed to be the Rebirth special. That didn’t completely hamstring the Cyborg series, but it certainly deflated it. On the ground floor of the Rebirth movement, Cyborg: Rebirth explains the origins of Victor Stone, S.T.A.R. Labs Detroit, and Silas Stone’s foray into cybernetics. There’s a lot put forth in this issue, and Semper does a wonderful job of making it all seem natural and (ironically) organic.

Silas Stone has never been the most sympathetic character in the DC Universe, but Semper pushes him as far in that direction as any writer has ever been able to. More importantly to the success of this issue as a Cyborg story, Semper makes it all relevant to Vic’s struggles, both historical and current. Vic, however, isn’t the hero of Cyborg: Rebirth until later in the issue, which works for Semper’s story. Yes, he’s in the issue, and he’s fighting through most of it, but this is Silas’ tale.

Paul Pelletier might be one of the most versatile artists in comics nowadays, having anchored recent runs on Aquaman and Justice League United. Sliding into the rotation as the lead artist for Cyborg, Pelletier draws everything with equal ambition. A close-up of Cyborg gets as much attention as Elinore’s labor, and in the span of one issue, Pelletier draws a wedding, a birth, a funeral, a victorious football celebration, an appearance from the Justice League, a secret hidden room in S.T.A.R. Labs Detroit, and, well, Cyborg. And every single panel is meticulous and masterful.

I imagine the reason behind the inking pair of Sandra Hope and Tony Kordos is as much hand fatigue as it is efficiency in getting this story to press. That said, I glimpsed some of these pages at Motor City Comic Con when Pelletier was here in May, so there has been a little bit of a lead between then and now.

Hope and Kordos do a slick job of keeping the comic consistent, adhering to Pelletier’s exceptionally tight pencils quite nicely. Pelletier rewards his inkers with plenty of spot blacks, from the hulking brute of Malware to rich, all-black tuxedos at the aforementioned wedding and funeral. Colorist Guy Major and letterer Rob Leigh bring their craft to the visuals as well, giving Cyborg: Rebirth a glorious polish that does a spectacular job of blending all aspects of the creative team into one glorious product.

The final page of Cyborg: Rebirth was jaw-dropping for me. I presume it will be just as impactful for other readers, but as someone who has been waiting since the launch of the New 52 for Cyborg to truly matter, the final image, the final line of dialog, the final burst of icy colors and clinical dialog, every bit counts and indicates that Cyborg: Rebirth is a healthy start towards getting Cyborg to be relevant, both as a member of the Justice League and as an individual hero.

It wasn’t a natural surprise by any means, but the revelation, buttoning up this issue’s narrative is exactly the type of surprise needed to launch a new series. That final splash delivers a shocking image that will stay with quite a few of us readers until Cyborg #1 hits the stands. Even better, it’s a darn good sign that Semper is dedicated to building up a collection of foes for Vic Stone to test his mettle (and metal) against.

While Cyborg: Rebirth is not going to turn the world of comics (or, for that matter the DC Universe) upside-down, it does exactly what it’s supposed to do: refreshes the reader on the titular character while establishing the cast and setting. And it does that in particularly magnificent fashion.