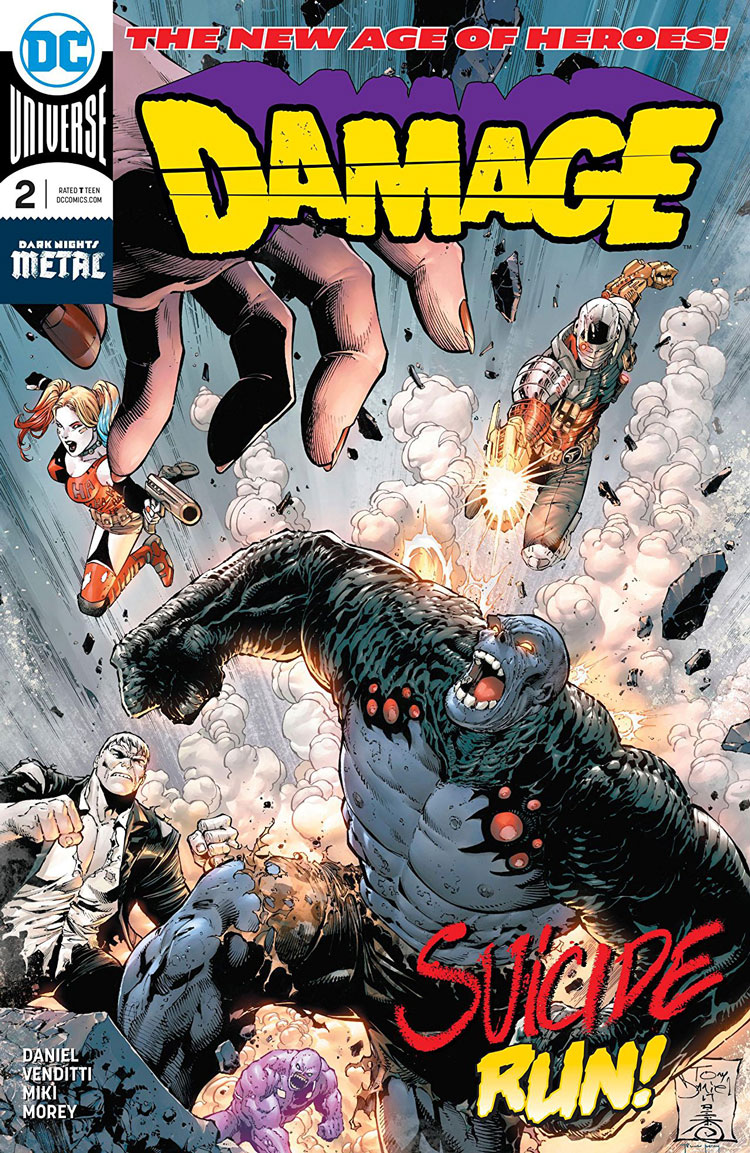 Settling into some character development after the debut issue’s explosion-filled splash-page-a-thon, the second issue of Damage shows a bit of backstory on Private Avery and how he became the uncontrollable monster Damage. On the lam from the military that created his alter ego, Avery is tracked down by the go-to government clean up team, the Suicide Squad.

This issue is definitely a more satisfying meal, and I confess I returned to it to see how this line will feel long term. I was pleasantly surprised to get something with a bit more depth than the Hulk redux the series started off as.

This time out, we get hints of Avery as a used up soldier, living on the streets and off the grid. We start to get a feel for the motivations and backstory of our lead, and we get a good amount of crashy smashy fighting as Damage faces off against Giganta, et al.

Daniel has some good storytelling in the quieter sections, building up the characters surrounding Avery. There is a particularly good ‘match cut’ that jumps us from Avery’s flashback of Damage in the field to Avery waking up from his nightmare. The fight scenes are, of course, the highlight and Daniel brings some nice surprises to the action.

Morey brings a light hand to the color, not pulling focus from the art with a lot of tones or computer shading. The look is a bit of a throwback to the comic art style of a decade or so past. It serves to keep the art clean, rather than detract from it.

Napolintano adds to the flow during the quiet times, but gets a bit stuck in the text-heavy sections. The word balloon flow is a bit clunky the more dialogue needs to get jammed onto the page. He gets painted into a corner at one point and needs to place balloons on top of a sound effect, which is not an effective use of either.

Overall, I give this issue credit as ‘most improved,’ though it it still an uphill challenge to find a voice more complex than “Hulk meets Captain Atom.”