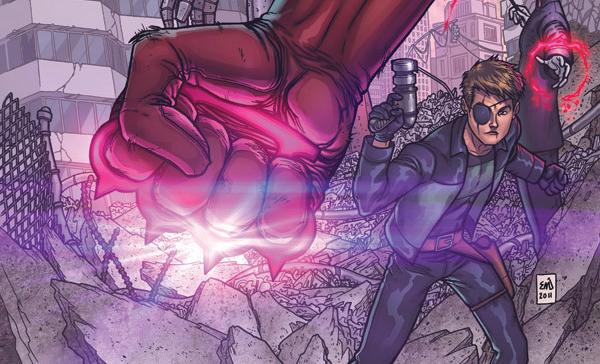 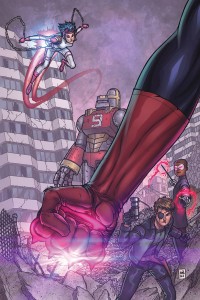 A concept so simple that it should have been an Elseworlds story years ago. All of Earth’s heroes go off to fight some cosmic menace , as happens every second month at Marvel and DC. But in Danger Club, the heroes lost. Left to protect Earth are all of the sidekicks. Landry Q. Walker tells an inventive story that skips the usual super-hero analogues that normally populate these sorts of books to create interesting characters that will be able to stick around for a while. It’s a very well-told story with the plot movement and action moving it at a fast pace. The parrellels to Lord of the Flies are certainly there, but for me Danger Club is about honouring the kid sidekicks.

Eric Jones brings a great super-hero style to the comic. Clean art, smooth story-telling, and unique character designs. I really enjoyed how the style subtly gets more serious as the book moves along. Jones has an almost cartoony style to the characters that ironically makes the book more effective than a grim-and-gritty artist might have accomplished. Walker and Jones work well together and the story is told with very little exposition, the art telling the story while the text focuses on characters and tight dialouge.

In a string of remarkable debut issues from Image, Danger Club is another unique and engaging work from a company that has been discovering the talent like no one since 90s Vertigo. Put this one on the shelf next to Morning Glories, it has the goods.