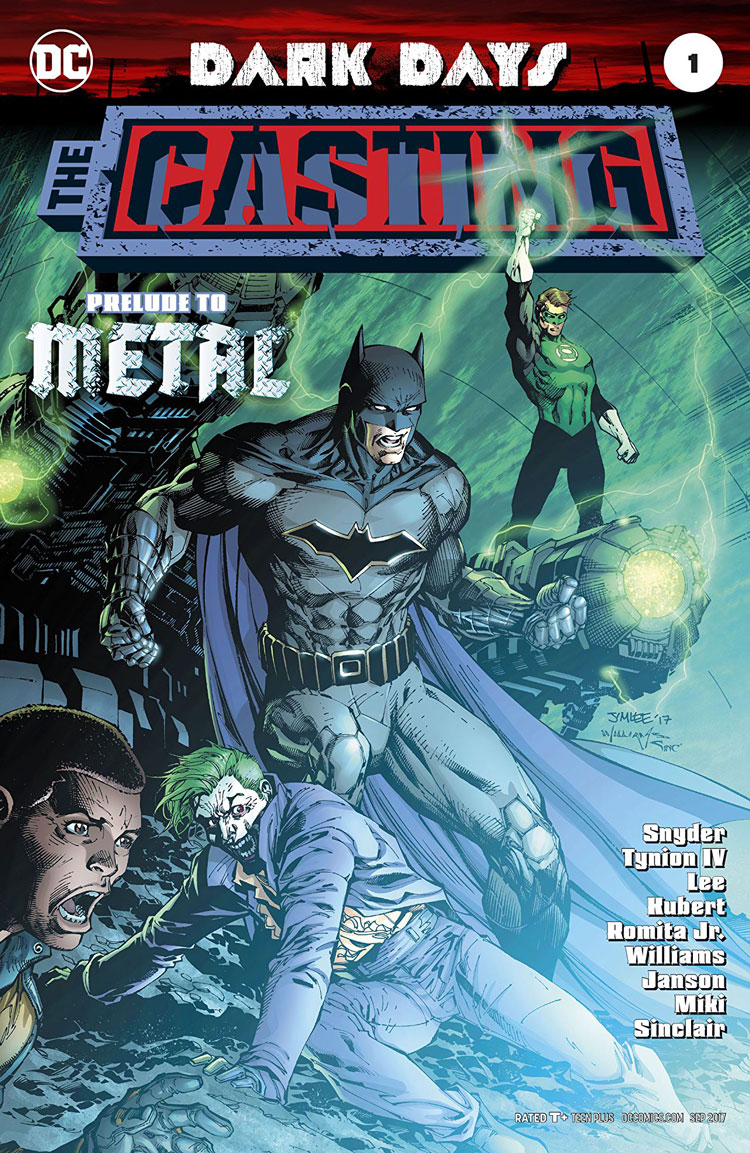 Green Lantern and Duke unleash the Joker and Batman tries to put together the pieces of his quest to peer into the unknown!

Dark Days: The Casting tells three parallel stories, continuing from Dark Days: The Forge. Batman pursues nth metal in a quixotic quest to investigate the mysteries of dark matter, while Hal (Green Lantern) Jordan and Duke Thomas deal with Joker beneath the Batcave. Meanwhile, journal entries from Carter (Hawkman) Hall are interspersed, providing exposition and oblique parallels to the other two stories.

This comic, more than anything else, is in love with the DC Universe. It’s a peculiar mix of Lovecraftian dread and cheerful, Silver Age ebullience at the vastness and diversity of the comic universe that shouldn’t work, but does. There are references galore to minutiae of the DCU both familiar and obscure.

At times it can feel like name-dropping, but for the most part it serves to do what continuity in comics does at its best: It makes the story feel greater than the sum of its parts, like a bright thread in an ancient tapestry. It adds texture and richness to an already intriguing tale.

For all that Dark Days: The Casting looks backwards, though, it isn’t really an act of nostalgia. It reintroduces long-dormant characters and plot devices while putting new twists on the familiar. It moves the universe forward, rather than wallowing in the past. Instead of rotely reproducing the comics the creators fell in love with, it recreates the feeling of excitement that those comics inspired by laying the groundworks for something fresh and new and vital.

Without spoiling anything, there’s a small tweak to one of the basic elements of DC lore that is breathtaking in its audacity and promises that this is an event that will expand and change the universe, rather than offering some mild entertainment then returning everything to a neat status quo.

It is also a dense comic. It’s thirty story pages, longer than average, and so packed with tiny details and parallels that you can read it four or five times and still notice something new each time. It’s a comic meant to be pored over, dissected, discussed, and returned to.

It’s also a prelude. This comic, and The Forge before it, are designed to set up DC’s forthcoming Dark Nights: Metal event. Dark Days: The Casting does a more than adequate job both of setting up the premise of Metal and building excitement for it.

The art is excellent. Multiple pencillers worked on this comic and, while different styles are in evidence, the contrasts are never jarring enough to be distracting. The art is, by turns, sharply detailed and simple and storybook-like; grotesque and surreal and awe-inspiring and terrifying.

The color work is solid throughout, with fairly standard realistic-type coloring in the Batman and Duke-and-Hal sections and slightly more simple and bright coloring in the Hawk segments, each well-suited to the stories’ respective tenors.

Dark Days: The Casting is a bombastic, effervescent introduction to the Metal event. It is deeply ensconced in continuity but, rather than presenting these connections as a barrier to be surmounted, it offers them as an opportunity to explore and come to love this universe as much as the creators do. It entices and offers the promise of exciting stories to come.