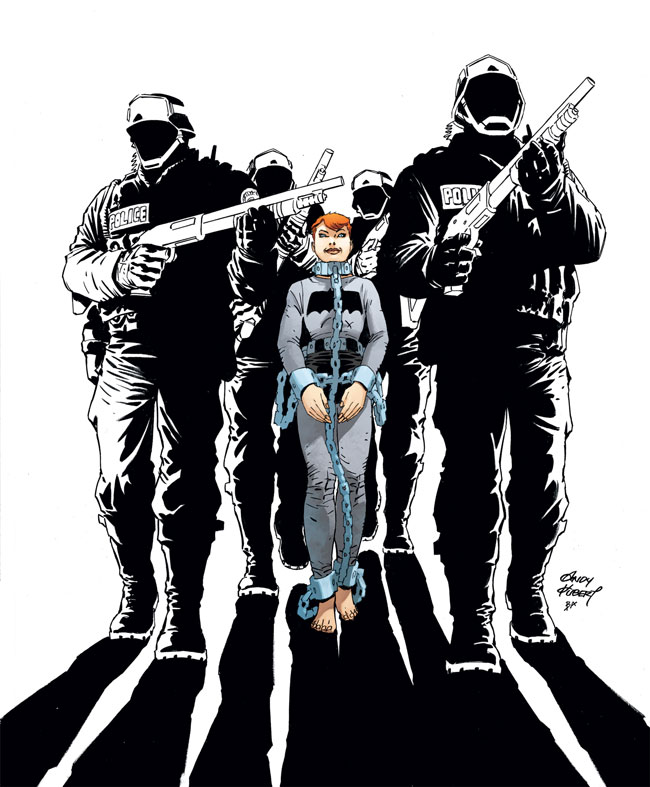 Carrie Kelley’s been EXPOSED! But is she ready to reveal the secret of what happened to Bruce Wayne? Meanwhile, the Atom and Supergirl are on a mission of mercy. But some good deeds just can’t go unpunished…

The interesting thing about DK3 is just how much it doesn’t feel like the first two iterations. Part of that is the story pacing. If you imagine issues #1 and 2 to be equal in scope to issue #1 alone of either DKR or DK2, then it lines up a little better, but honestly, I think the key difference is that this doesn’t feel like Batman’s story yet.

Not that that’s a bad thing. And perhaps I should clarify. The entire narrative is about Batman — what it means to be a human being with limitations in a world that’s escalating out of control in terms of both ethics and super-powered threats. This may not be Bruce Wayne’s story at all, but Azzarello and Miller are telling the story of Batman, however obliquely, through other characters.

Take Ray Palmer. Scientific genius, but not a forward thinker. He acts, as some would say many scientists do, without considering consequences beyond the result of his experiment. Ray is good-hearted, but not a tactician. Not a man that can predict all the angles. It’s an interesting contrast in the wake of Bruce Wayne’s death, and not the only one the writers are pushing forward in issue #2.

Ultimately, the real dichotomy the writers present is human vs. superhuman or godly, with Carrie representing the best of one — particularly in the wake of her incarceration at the end of issue #1 — and others representing the worst of the other. And Lara, who Palmer even calls out for being less human than her fully alien father, is the lynchpin to the two, in some ways, like Batman always has been. 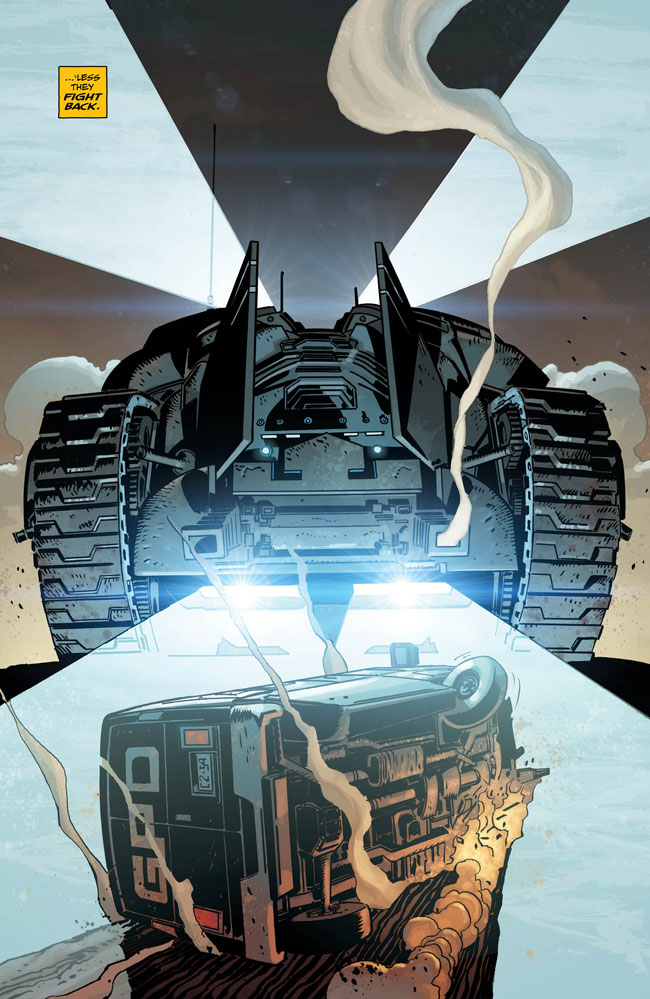 Kubert’s layouts in issue #2 are environmentally creative in a way that continues to diverge from Miller’s original style for the Dark Knight books, but still harness some of his shorthand visual language to tie the book to its forefathers. The energy of the layouts does not necessarily translate to the storytelling pace, however, as we get a car chase scene that feels unnecessarily weighed down and listless. Brad Anderson’s palette treatments, on the other hand, are absolutely lush and vibrant, making even empty backgrounds pop alive with visceral color.

Where we get an extra little treat with issue #2, however, is in the mini-comic starring Wonder Woman and Supergirl drawn by Eduardo Risso. This quick interlude (like the one with Ray Palmer in issue #1 that was not included in that issue’s review) features a brief set of moments between Lara and her mother in sparring — both verbally and physically. Narratively, it adds to this sense of humanity vs. gods and makes the struggle even more personal, but artistically, it’s just gorgeous. Risso’s simple line and inks feel so modern and clean, leaving all the dynamism on the page to layout and how the characters move throughout the space. The intergenerational feeling between Lara and Diana, despite the latter’s inability to age, is so perfectly captured, with Wonder Woman often fading into shadow while her daughter remains this bright, neon dancer in the arena. Their body types are so vastly different, as are their emotional ranges, and I’m just so pleased by the interaction Risso delivers.

A strong issue that moves the narrative along and opens up the main conflict for the series, Dark Knight III: The Master Race #2 starts to ask the big questions that I hope remain on the table and get answered by series end. What is the best humanity can be? Is it still weaker than the worst of the gods? And what happens when our best example goes away?