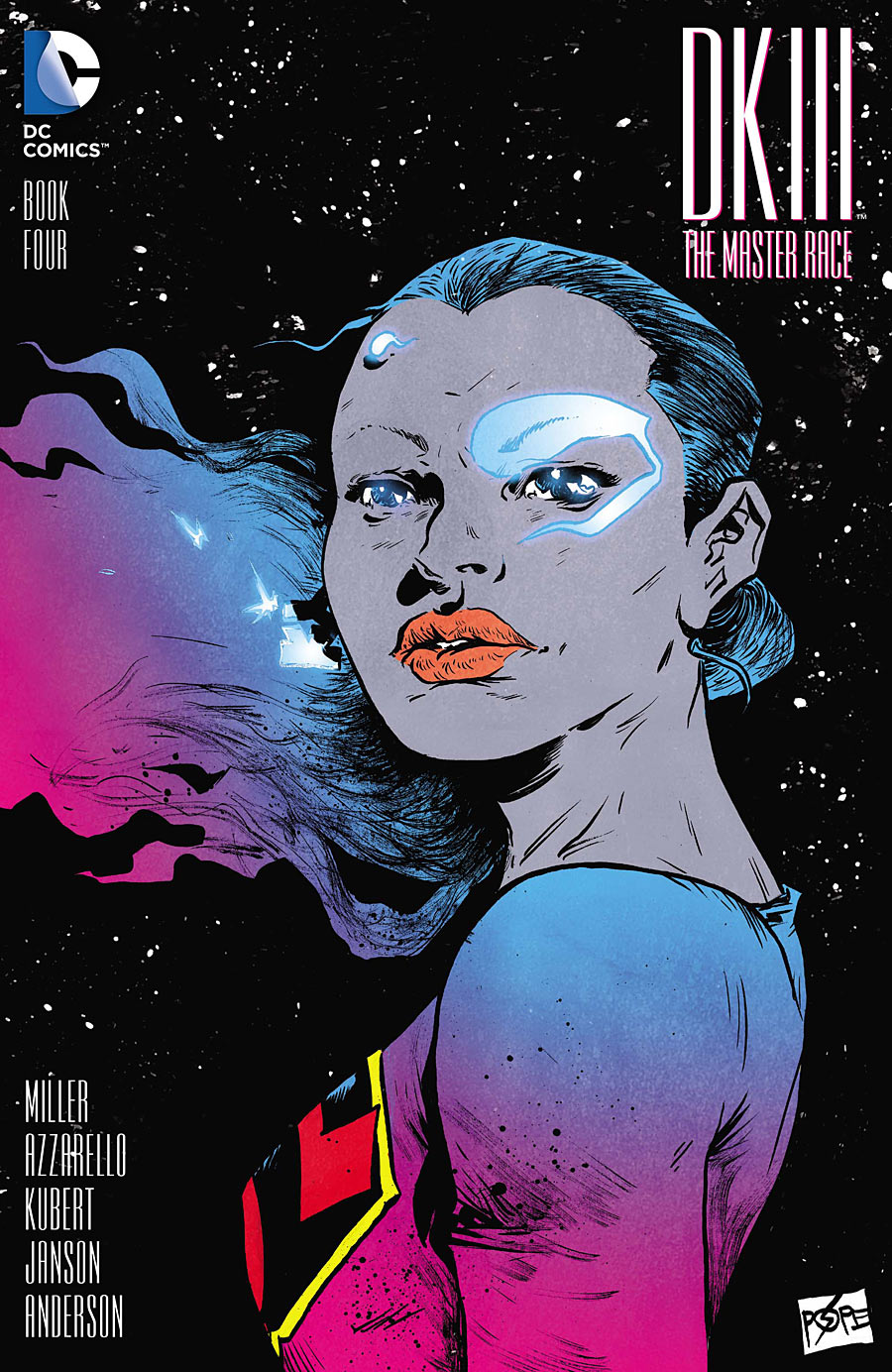 Despite a powerful last stand from Superman, the air is let out of the balloon this issue, as the series abandons much of its early promise to stay on the straight and narrow.

The world stands on the brink of oblivion — or so Ray Palmer tells us on the opening page, as we discover him considerably more alive than when last seen in the second issue. He’s been shrinking and he’ll continue to shrink until he reaches subatomic level, finally getting a handhold on a molecule at the close of the issue. “Maybe I can fix it,” is the line that closes out the fourth chapter, which is more or less the same tenuous position the creative team is in.

The issue starts out strong, picking up from Superman’s intervention into the battle at the Pentagon with his showdown against the Kandorian death cult. Clark refuses to stand down when confronted by his daughter, but he won’t hit back either. It’s a profound statement about the character to see him driven through the Lincoln Memorial and all the way back to the Fortress of Solitude, leaving a bloody trail half way across the planet.

Because that, fundamentally is Superman. Miller has had a rock solid understanding of his willingness to sacrifice himself for the planet dating back to when he intercepted the nuclear missile in DKR. And so, somewhat perversely, the brutal beating and presumed death stand out as the highlight of the issue. It was Grant Morrison and Frank Quitely who codified Superman’s answer to the question of what happens when the unstoppable force meets the immovable object, but it’s been at the core of the character for a very long time.

When it comes down to it, Clark will always sacrifice himself for his friends, family, or the planet itself, and in that regard, this issue is unimpeachable. This could very well be the moment that Azzarello believed would make us love Superman again, but Ray Palmer’s subatomic meddling may very well prove to be the vehicle for something more closer to the finale.

The real betrayal this issue, however, is to the promise of the debut. DK3 began centered on four female characters; Carrie Kelly, Lara, Commissioner Yindel, and Wonder Woman. But by the fourth issue they’ve all been more or less shunted to the background. 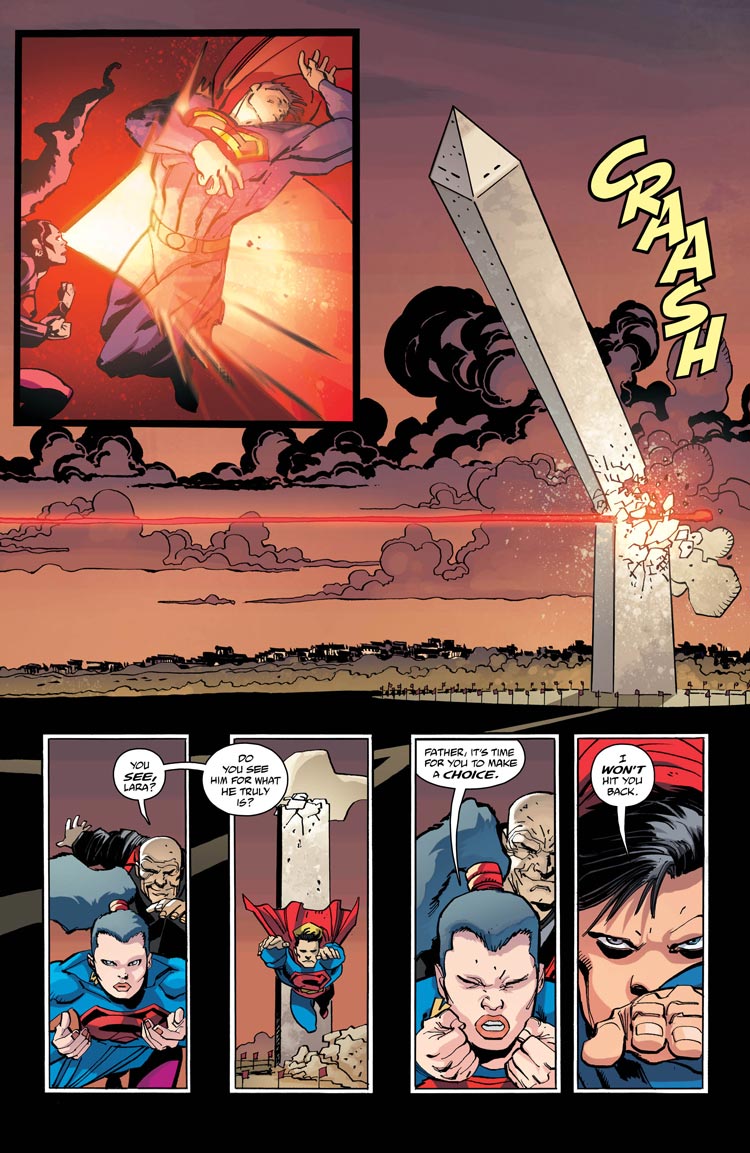 Lara is definitely present, delivering the beat down to her father that leads to his incineration, but it’s all focused on Superman himself. She’s simply the vehicle for it and a pawn in Baal’s game.

Her mother, despite the strong set-up in the debut (and her central role in the best of the mini-comics so far), does little more than ignore a phone call from Bruce. Diana tells us that humanity has made a decision in standing by while her daughter murders her lover, and she will abide by staying in the jungle with the amazons. It’s a pretty mind boggling decision that doesn’t carry any weight with her prior characterization.

Carrie is present and she’s more or less set up to take center stage in the next issue. But again, it’s all seen through Bruce’s eyes as he passes the torch for presumably the last time.

The ultimate problem with DK3, beyond collapsing the villain into a cheap recasting of General Zod as a religious fanatic, is the abandonment of the previous entries’ ambition. DKR offered up the death of the Joker as an appetizer to close out the first act and grew from there. DK2, while a complete mess of pacing and plotting, is nonetheless remarkable for its sustained ability to swell repeatedly towards a feverish climax.

By comparison, DK3 comes off as muted and unforgivably decompressed. The Justice League is unmistakably rallying for one last conflagration, but its all in service to a single clear cut foe rather than Miller’s pattern of a localized threat that balloons into a conflict of  a much greater scale.

In the main issue, Kubert and Jansen continue to pursue a synthesis with Miller’s signature style, and in places it shines through, particularly in how the crowded, chunky inks of Baal’s grimacing face recall Miller’s Luthor in DK2, but it’s never allowed to take hold and instead drifts back to Kubert’s comfort zone. 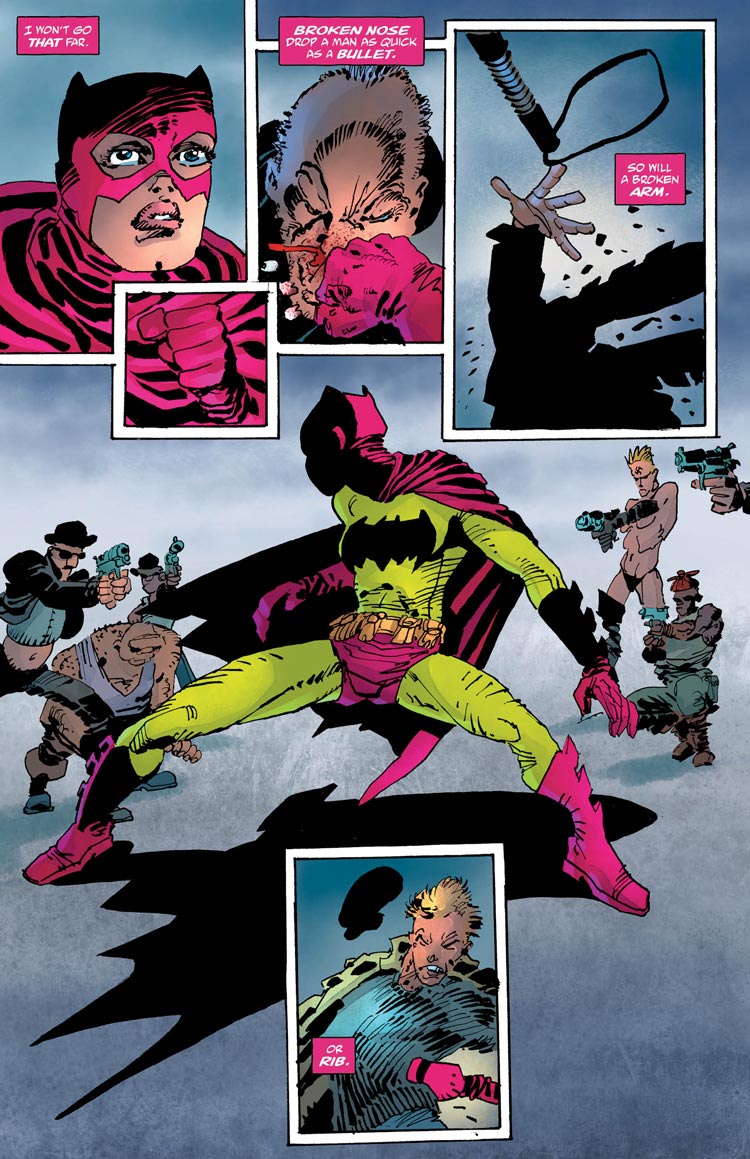 The mini-comic continues to seemingly flail at how to handle Miller on art, this time leaving it all up to him rather than employing Jansen on inks or having Miller do finishes over Romita Jr. For better or worse, it’s what Miller can conclusively deliver on his own, and while it can’t match the ambition and execution of Holy Terror, it’s unmistakably Miller in his own voice. It’s a purely art driven affair, stripped of the exposition of the preceding entries which works well for Miller’s storytelling but does little for the Batgirl it’s supposed to be showcasing.

There’s no real sense of who the neon pink and green clad DK universe Batgirl is and her sole function seems to be the set up for Aquaman’s involvement. Which is pretty much a microcosm for the character arc of all the major female characters currently in play. Which is a shame, because it’s the young female heroines where Miller has always shined the most, from Carrie Kelly and Lara in the Dark Knight books to Black Canary and the particularly sweary Batgirl in All Star Batman and Robin the Boy Wonder.

If DK3 has proven one thing about the loose franchise it’s attempting to tie up, it’s that the worst thing you can do in that space is to streamline it.