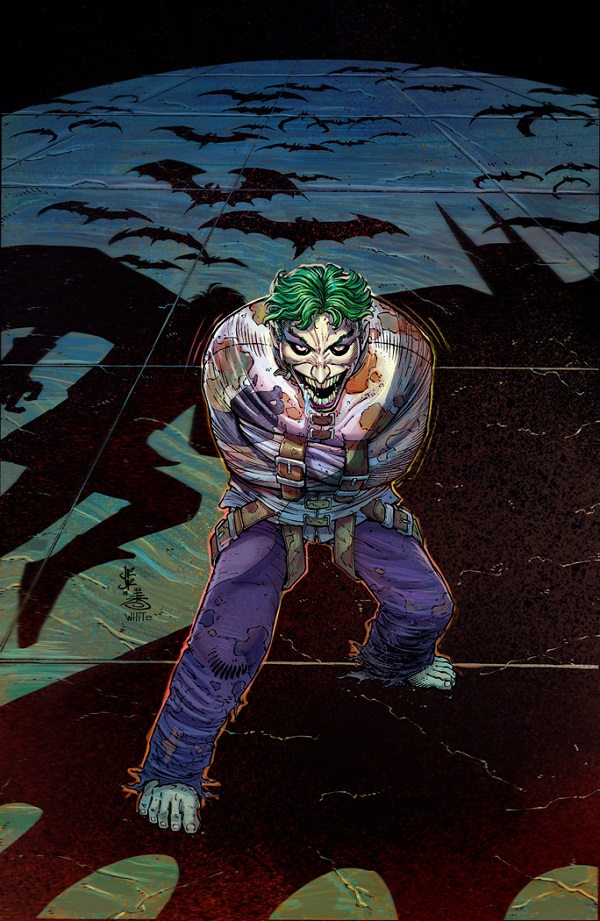 In the days before Batman’s ultimate showdown with the Joker, a meeting that resulted in the Clown Prince of Crime’s death, there was still a Robin. Jason Todd fought by the Dark Knight’s side, training and growing into the man who might replace the aging Batman someday.

And then he died.

And Batman had to keep going.

It’s always a surprise to come upon a comic or graphic novel that upends expectation pretty spectacularly. Sometimes that’s with a quality of art that previous projects couldn’t predict. Sometimes it’s with a depth of character or story that you thought couldn’t possibly come in this type of package.

The Last Crusade, happily, includes both.

I know, it’s very de rigueur to pull apart Frank Miller these days. Holy Terror may be well gone in the rearview mirror, but from where I’m standing, Dark Knight III hasn’t stood up over time to the promise of its first issue. Where that series began with a rich sense of female authority and action, it has since devolved pretty significantly — for me, missing the opportunity it had to turn conservatism in 2016 on its head. The politics of change, it feels, have crumbled back into something familiar. Or at least less complex.

And John Romita, Jr. appearing to me as somewhat of an acquired taste in artists, didn’t strike me as the best choice to expand out the Dark Knight universe. His usual style, while flattened in many of the same ways as Frank Miller’s own drawing, doesn’t have the sharpness of Miller’s form. In my mind, it comes down more often than not to inking, with Miller partnering with Klaus Janson to produce a more robust form, and Romita often resorting to leaving pencil-esque line on flattened faces and bodies.

And in this sense, The Last Crusade is a magnificent revelation, not just because it features the best work I’ve seen from Romita is over a decade, but also because Miller and Azzarello are telling a deeply introspective story that transcends politics down to the minutely personal aspects of growing old.

In some ways, Dark Knight Returns was all about being old, about taking on the brutal challenges of physical activity when your body is far past its prime. But what it didn’t do, that The Last Crusade has, is describe the process of getting there. Of aging, not just being aged.

The narration Miller and Azzarello provide here is stunning in its personal quality, its self-awareness on the part of Batman, and in some ways, in what gets left unsaid. We are largely treated to Bruce’s trials with a body that’s going downhill, but still can be roused, and a fear of death that comes out over and over in his encounters with villains far brawnier than he is.

Unlike the DKR Batman of years to come, this Dark Knight doesn’t have that laugh in the face of fear attitude. Has he lost his insurmountable bravado, or just not developed it yet? Either way, I get the impression that Jason’s presence, the need to keep teaching, the fear of where he might go wrong, is both what keeps Batman going and allows him to let vulnerability in. He has an out still. By the time DKR rolls around, that out — as we see by the end here — is long gone.

Romita’s lush work with Peter Steigerwald on inks and colors perfects this quality of failing (not failed) physicality, giving us a Bruce Wayne who is both run down in body and spirit. Someone who keeps getting up, but slower than he would like. How Romita has Batman carry himself speaks as much to the weight of his troubles as the internal narration, and that perfect marriage of word and form is really what brings this story together.

It’s a nice slice of time too, to see elements of Batman’s world from the earlier mid-1980s, before Batman: Year One and Dark Knight Returns washed away a few of the more interesting aspects of the ongoing titles. Romita’s Killer Croc, represented not as a mutated crocodile but a circus act strong man with scaly skin, has a physicality that’s more human and a wonderful contrast to Batman’s own failing body.

Catwoman is on the side of angels, in love with a Bruce Wayne that can’t let it go. Todd still has a sense of innocence and straightforward heroism to him, even though we’re starting to see these really sublime subtle inferences of his darker nature. For those who loved the era of Gerry Conway, Mike Barr, and Alan Davis on Batman, there is plenty to enjoy here. It’s magic that the creative team chose to place this prequel to a future tale in chronology with the actual publication of the original story. That’s a small trick that has reaped enormous rewads.

A surprisingly stunning take on that in-between aspect of Batman’s character we neither see at his beginning (Batman: Year One) nor at his end (the Dark Knight trilogy), Dark Knight Returns: The Last Crusade is a comic you don’t want to pass up. You’ll be tempted to write it off as a cash grab addendum to the Dark Knight III mini, or a throwback to an era that could only grab the most concerted fanboy.

This book is as personal and as emotional as we imagine Miller’s other work to be political. With the nature of physical breakdown and aging so deeply woven into its graphic DNA, Dark Knight Returns: The Last Crusade is a profound addition to the Batman mythos, and one that holds up successfully to Miller’s work of three decades ago.