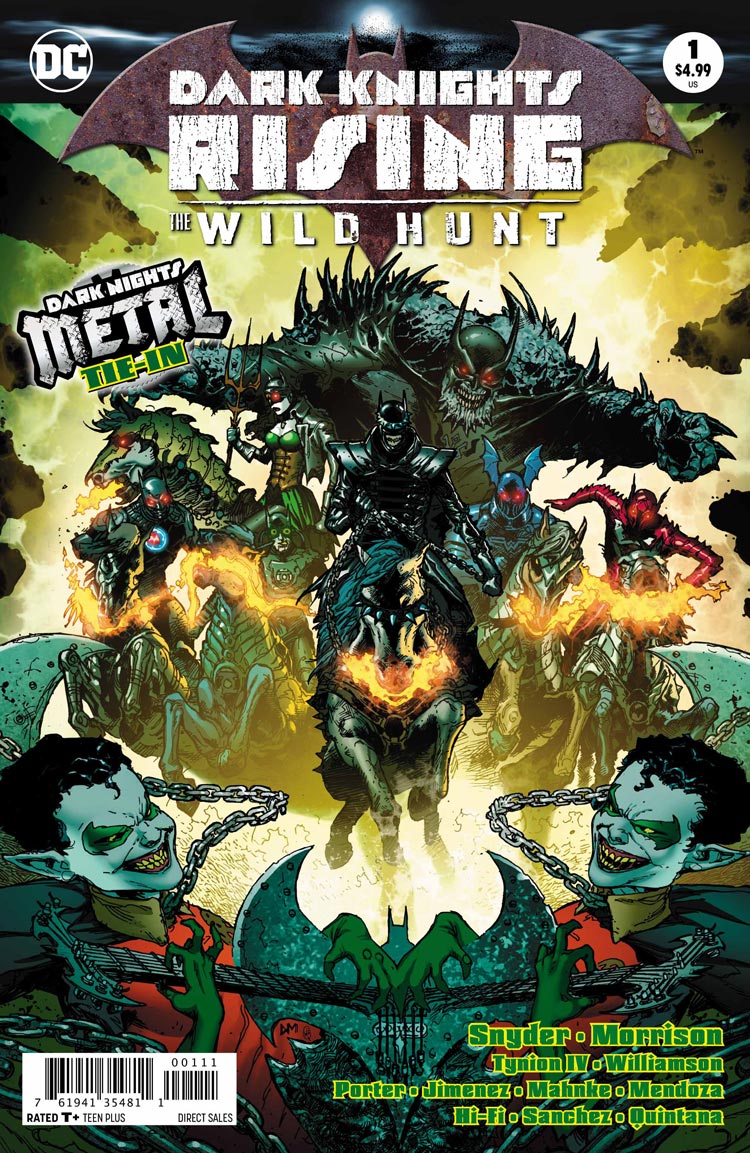 Any comic book that brings more Detective Chimp into our lives gets bonus points in my opinion. Those points, however, like the points on “Whose Line Is It Anyway?” are made up and worthless, but Detective Chimp is not.

The quartet of writers delivering Dark Knights Rising: The Wild Hunt #1 – Scott Snyder, Grant Morrison, James Tynion IV, and Joshua Williamson – open the issue by putting us under the magnifying glass and Bobo on the other side, peering into our souls.

Snyder has tweeted out how much he enjoyed the Detective Chimp sequences, so we’ll give him at least partial credit for the opening portion of this comic that dives into Bobo’s origin and brings Rex the Wonder Dog and Alec the Swamp Thing as bit players. The other writers undoubtedly contribute to the flow of the issue as a whole, but the Detective Chimp origin story works nicely as a pre-credits shot.

Music factors in (this is a tie-in to Metal proper) and drives the through-line of the story, with accordions and “wind harmonics” serving their parts as Morrison, undoubtedly, prodded the re-assembling of the Oolong Island Mad Scientist Club.

Metal drives the story, but Multiversity takes a prominent role (Morrison, remember?) and even bits of 52 seem to find relevance. The cast is tight: Cyborg, Flash, and Raven on their quest for the Hall of Heroes; the aforementioned scientists and a fair supply of their creations. Blackhawk Island and the Multiversal Bleed are the settings, and, of course, the Dark Knights show up to make Dark Knights Rising: The Wild Hunt #1 interesting.

One of my cohorts mentioned that this reads like a Morrison story, and he’s not wrong. It also reads like a new chapter in the Metal epic, and a crossover of dynamic proportions. There are bits of character work in this story, but nothing that matches the more extensive attention Bobo receives at the start of the story.

That said, Howard Porter absolutely needs to do more Detective Chimp work. The sooner the better. As he does, Porter packs his pages with detailed details on top of strong figures and solid storytelling: the perfect mix for a circus, a swamp, and a chimpanzee learning more about the world around him than the rest of us ever will.

One panel in particular, where the trees part and the sun shines down into the glade, Porter fills with frogs, owls, herons, flowers, lilies and so much more that colorist Hi-Fi surely must have needed to put in a bit of overtime to finish. Through it all, Porter delivers great storytelling and brilliant page construction, adding depth throughout the opening scene.

Jorge Jimenez and Doug Mahnke bring similar sensibilities in their storytelling choices, but their page layouts get more angular and more fractured, as does the story throughout the latter portions of Dark Knights Rising: The Wild Hunt #1. Both artists could also deliver more Detective Chimp work and I wouldn’t complain, but Porter landed first chair in the audition. Jimenez and Mahnke are aligned with the Dark Knights’ conflict with the trio of Raven, Flash, and Cyborg, and they do a stellar job.

The story gets manic and frenzied as the book progresses, so by the time Mahnke settles in, the extra grit present in his collaboration with inker Jamie Mendoza is darn near tangible. Colorists Alejandro Sanchez and Wil Quintana have a little more creative latitude in the scenes they color, given the locations of the Bleed and the Ultima Thule within said Bleed. Pastels, near-neons, and glows run rampant throughout, but as dictated by the story, the duo also dial up patterns and textures, adding grit, dust, and debris to the tale, which is full of uncertainty and struggle.

Clayton Cowles absolutely delivers with the lettering in this comic. The caption boxes of Bobo’s origin tale are comfortable and rustic, with mixed case characters that make the story personal, as though peeking into a private journal.

From there, Cowles employs an astonishing range of styles from the Batman Who Laughs’ painful red on black balloons to Cyborg’s defeated resignation. Nearly every possible lettering choice is visible at some point in this issue, but Cowles doesn’t overdo the variety, especially given the scope of this tale.

Dark Knights Rising: The Wild Hunt #1 is a thick read that almost stands alone, but really needs the context of Metal to be successful. Anyone grabbing this issue along might feel disoriented or disconnected, and they wouldn’t be wrong. This appears to be an integral turning point for the Metal saga, despite being a bit of a swerve at the same time.

It all comes together in a single issue packed to the staples with backstories, side stories, and untold stories. What happens in Metal and beyond will undoubtedly be affected by the decisions made here. In the meantime, give it another read. It’s a collaborative festival for the eyes, equal parts operatic headbanger and orchestrated ballet.

There’s a lot here for the money, but for my money, it’s worth it all just to get a tale of the Detective Chimp. All the chairs are set for the Metal finale. Let’s see how it plays out.