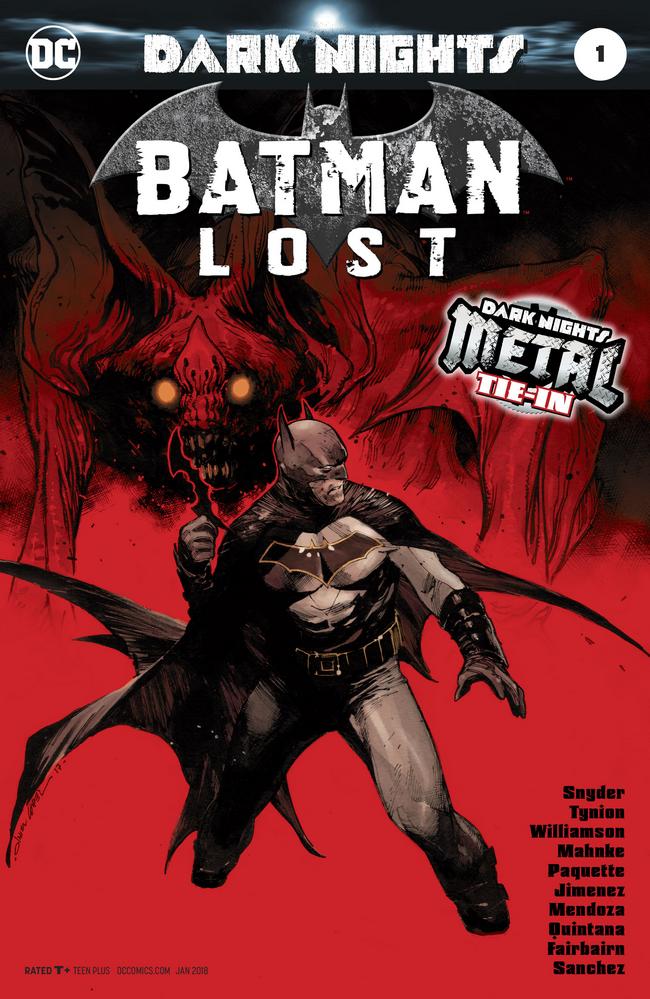 Batman Lost #1 is a tie-in to the Dark Nights: Metal event spearheaded by the dynamic duo of Scott Snyder and Greg Capullo. It’s a raucous comic with dinosaurs, prophesies, alternate dimensions, and bombastic action. It’s extremely clear that everyone worked on this event really leaned into the absurdity of comics and looked to have as much fun writing a Batcentric DC story as possible.

If you’re not in the know, Dark Nights: Metal tells the story of a prophecy involving Batman and five divine metals that open the door to the Dark Multiverse and the evil god that waits inside them. The Dark Multiverse exists on the notion that a fear in one universe leads to the existence of a neighboring dark universe, which leads to some of the most fun a Batman story can have, seven subsequent “evil” Batmans and seven messed up worlds. While the Justice Leagues has their hands full keeping these “Dark” Batmans from destroying Earth (special shout-out to the Batman Who Laughs, what a killer concept), our real Batman finds himself trapped in the dark multiverse, which leads to the Batman Lost #1.

It’s pretty clear that everyone who worked on this book is, above all else, a massive Batman fan, and you can really see it in this issue. Using a framing device for the issue where a disorientated Bruce trapped in a dark dimension reads a Batman story to a fake grandchild, Bruce states that “all the stories happened, even if they conflict each other, they’re all real.” This tip of the hat at the looseness, yet essentiality, of comic continuity is really the heart of this story. There are multiple “wink wink nudge nudge” moments like this that call back to famous Batman stories, so any fans of Batman greats like Morrison or Snyder will get a warm fuzzy feelings at these references.

The issue here becomes one of Batman introspection. This issue relies heavily on digging into past Batman themes and experiences. Snyder has created some of the most important Batman lore during his New 52 run, and this issue leans heavily into that with questions of the origins of the Court of Owls and their relationship to the Waynes. This issue only builds on the entanglement of the Waynes to the darkest forces in Gotham, and in that sense, it builds on existing continuity. It similarly ties the Court of Owls and Batman’s battle to the beginning of time, which Snyder had done with the Joker as well. Furthermore, looking back at the troubling figure of the Bat is not new; Morrison did it fantastically in his Arkham Asylum run. Morrison and Snyder both looked into the realization of Batman’s greatest fears.

The writing team on here (which, unsurprisingly, includes Snyder) really digs into these themes, reopening the wounds at the heart of Bruce’s character. Snyder takes full advantage of all the emotional Batman development in the continuity and returns to the most tortuous aspects. Batman fans are bloodthirsty for Bruce’s suffering it seems. We watch as Batman jumps from nightmare to nightmare of his (well, his dark version’s) own making, desperately trying to find the “truth.” Unfortunately for Bruce, the truth has rarely been kind to him. Bruce nearly buckled in Morrison’s “Arkham Asylum.” Bruce couldn’t accept the truth of what Joker said in Snyder’s “Death of the Family Arc,” a personal favorite scene of mine. Whether Bruce is strong enough to accept his failings is the ambrosia of all good Batman tales, and its this understanding that makes the climax of this issue impactful despite all the insanity surrounding it.

Batman has always sported some legendary artwork, and there’s nothing different here. Crisp lines, amazing detail and character design. Mahnke, Paquette, and Jimenez make an exceptional team. One of the delightful aspects of this issue was that each world that Batman visits has its own distinctive style that perfectly matches the world represented, but its done so subtly that you barely notice the shift. From the Conan-esque art of the “before time” scenes to the graphic style of the more traditional Batman detective story, it really helps define the tone of the world in a short amount of time. Kudos to the art team, this issue was artistically demanding between the meticulously rendered details and totally insane blowout space scenes. If I were to have one criticism, I would say that we move too quickly between these dimensions. They’re so beautifully rendered that I would have enjoyed savoring them a little further, and the fast pace bordered on disorienting. However, I will give credit to the fact that slight confusion is likely the desired effect at first, as we are meant to share in Bruce’s disorientation traveling world to this cursed world.

All in all, this was an incredibly fun read that has so much charm and heart that you can’t help but be swept up in it. Long time Batman fans will find a lot to ponder over, and casual readers will just enjoy the badass battles, evil entities, and gorgeous art. You can really feel the Bat-love and fandom the creative team has put into this.