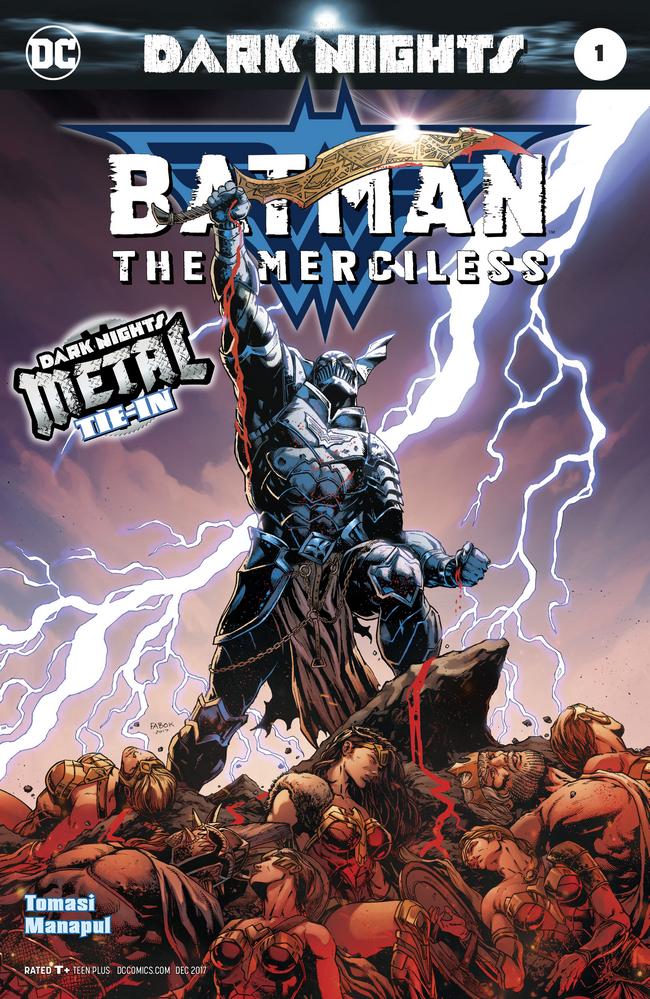 Batman: The Merciless is a beautifully dark story that only suffers from the limitations of it’s pages. As with the other entries into the Dark Nights: Metal tie-ins the story introduces us to another of the Dark Batmen and his arrival to our world. His story, though tragic, is interesting and could use further development in the future. It’s a poignant portrait of a hero taking one step over the line of good to evil.

Writer Peter J. Tomasi has given the reader a solid story and excellent dialogue but where the story falls short is it’s length. There is so much more that we could have learned about The Merciless’ story both before and after his arrival to the DC universe but Tomasi just didn’t have enough space to tell his story.  The reader may feel a little lost at times as the story flashes back and forth in time dropping into pieces of “the Wrath Child’s” life. However, it’s a good examination of the edge on which any version of Batman/Bruce typically lives. We have already seen one version of that play out in the Batman V. Superman movie. In the film the Batman has lost his mercy aspect and now kills without restraint. Batman: The Merciless is a much more extreme version of this as we encounter him without the limitation of mercy and what may be unlimited power. Tomasi convincingly gives The Merciless a heart, though, while still being brutal. There is still a tinge of regret under his metal exterior as he destroys his enemies. This gives the story depth and may move the reader to feel sad for The Merciless. Tomasi has done an excellent job at writing the dialogue for the two characters The Merciless and The Batman Who Laughs. The Merciless words are epic and tragic while other’s are plotting and sickly. Given more space the tale could be fleshed out more and given time to delve deeper into the backstory. There is an epic story here but it seems to happen just before and in between what we are given in these pages. There is enough in this issue, though, to give the reader a comprehensive understanding to where this Batman is coming from.

Francis Manapul excels at illustrating this story. He takes us from the classic look of Batman into the Merciless version with ease. Batman as we know him almost looks weak and defeated while the Dark version is drawn full of power and lumbering ferocity. The coloring for the issue is exceptional. On a whole, the color palette shifts from calm colors into those of passionate anger and finally into deadly heavy blacks. Lots of reds and oranges overpower most of the scenes in tune with the anger that is being put forth by the Merciless. With this coloring even the cold of his metal armor is brought to life with the fire of his vengeance and thirst for war. Manapul uses parallel hatching for his shading technique which adds to the quick pace of the story but also seems as if it has lasting implications as if carved into sheets of metal. Tom Napolitano’s does an excellent job lettering this story especially with the different tones of the two Batmen. There are subtle differences in the design of the text that set apart the two differing yet similar speech patterns.

Overall the story of the Merciless is a tale that not only gives the reader an evil Batman but a broken Bruce. Without the good in the universe to nudge him back he falls ill to the corruption all men are said to be stricken with. It may be important to keep an eye on the Merciless as the Dark Nights: Metal storyline progresses.