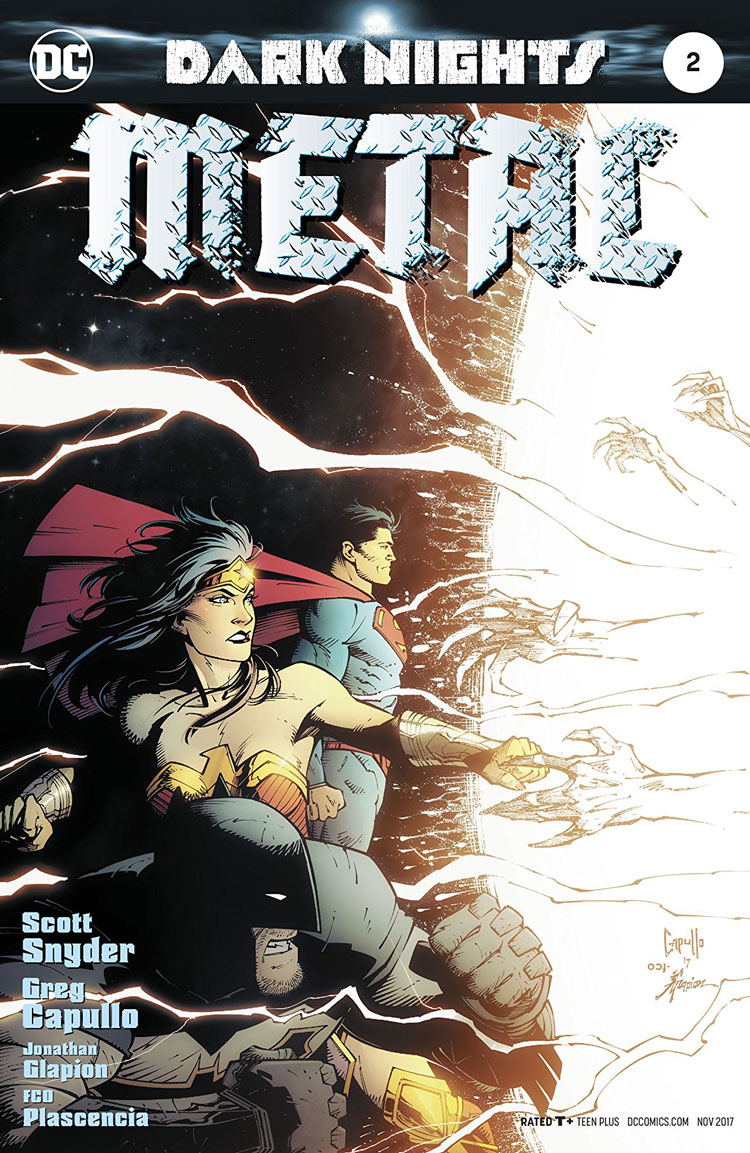 WARNING: Mild spoilers are present for discussing this issue. It is too insane to review something as … out there … as Dark Knights: Metal and not drop some clues that this book continues to be worth your time.

No, really, I can’t believe I am about to type this next sentence.

Around the end of this comic there is a sequence that involves what I can only describe as Batman holding a weaponized baby. A baby.

Dark Nights: Metal #2 builds on the insane ground work that was Dark Days and The Casting, as well as the spectacularly insane first issue, and to its credit it keeps the momentum barreling right along. Immortals gather together, the Justice League (as it probably always will) has to be distracted enough to show they’re trying to catch Bruce without ever actually catching him, and revelation and after revelation gets revealed with all the charm a book like this muster.

And, to the book’s credit, there is a lot of charm here.

Comic continuity is a strange thing to try and work with, often with writers working only in a set corner of the DCU (such as, say, when a writer takes up Green Lantern) or they might get to work on continuity wholesale during Crisis events, or some-such. In a weird way, this book should have been called something like Dark Crisis because, as continues to be explained, this book is as much an Infinite Crisis/Final Crisis tie-in piece as it is a Bat-book.

Snyder weaves together all the arcs of this previous narratives through the metals that were present in their plots to justifiably help us make sense of ‘why’ Batman is the key to the darkness that is approaching the DCU. The package is sold well enough, but (as I have asked myself over and over again since this book series started) I wonder “why Batman?”

There are no exact answers to the question offered in Dark Nights: Metal #2; however, the book does provide the final, heavy piece of exposition needed to get X number of characters into X location to that X crazy thing can happen. By layering what Snyder has done against the backdrop of Crisis/Final Crisis materials, Snyder has managed to integrate his toys into the bigger Crisis playset and readers can now enjoy all of them without feeling like they don’t fit well.

In short, things are fun in this book, despite what might appear to be laborious, tedious world-building. Snyder has always had a talent for making the most complex writing and narrative points clip right along and his skills serve a book like this well.

Did I mention there is a weaponized baby?

The use of Neil Gaiman’s narrative toys in this comic is probably the one thing I personally am anxious about, simply because a character such as the one being used has never been the kind of things I am used to seeing anymore in a mainstream hero book, despite how this was one not the case. I am excited for this plot yielding fruit, but for now the process seems more useful for marketing and branding than narrative. There is a great splash page with this character against the Dark Nights:  Metal logo, but as a reader I am still in the dark as to how this character and Batman are going to intersect.

Guess I’ll need to check out the third issue, right?

While the art of Capullo, Glapion and Plascencia is probably iconic enough know that you, dear reader, don’t need me preaching to you in the choir about how great they all are together, let me gush on some particular details that occur towards the end of the story so I can give you even more reasons to feel safe buying this comic.

Towards the end of the story there is a moment where, at last, the dark multiverse counterparts of Batman make their entry into the DCU. There have been some previews floating around know about one of the Dark Knights, The Batman who Laughs. His cadre of ghoulish Robins is one of the most disgusting and freakish things I seem depicted in a DC comic and they’re spectacular thanks to the art team.

The Dark Robins are gaunt and wiry-framed killing machines whose linework and penciling render them as lithe and agile cannibals. They’re made even more effective through their ghastly color palette which shows their skin as joker-gas grey, with rictus grins fill of the kind of teeth-work that is now ironically Capullo’s trademark style. The colors transition from greys to reds as these creatures appear, the heralds of the rest of the Dark Knight squad.

The panels that many have probably seen through previews of what these dark Batmen look like is nothing compared to the full page spread itself. The whole art team worked together to create distinctive designs for each of the Dark Knights, with special attention having been given to each of them thanks to the balloon and lettering work.

Each Dark Knight appears to have their own distinctive textual and balloon designs, something I hope remains in play every time these characters speak. They’re just one example of how interesting the character concepts are from a design standpoint, so I am excited to see them in action.