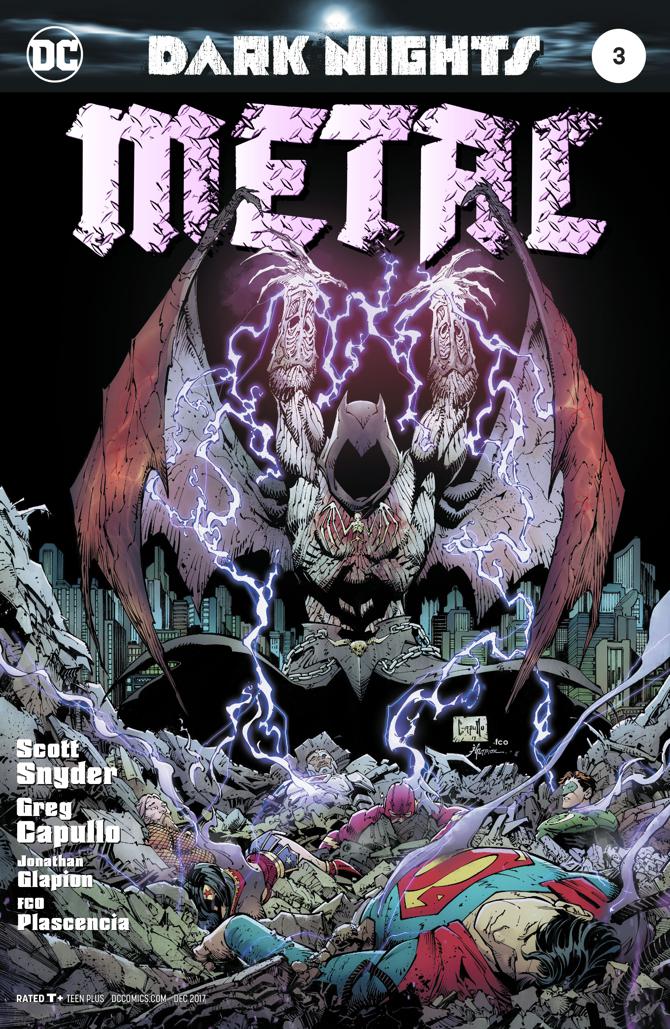 With a pace as intense and weird as the Dark Nights: Metal series has been, it was inevitable that at some point the story was going to have to slow down a bit. Issue #3 uses a great callback to “the days of awesome comics past” to give many characters a chance to catch their collective breath, but in the end the pace suffers.

This is in no way saying Metal #3 is a bad comic. It isn’t. Readers gain a glimpse within the twisted world of nightmares Barbatos commands, and pieces of his ultimate plan seem to be coming together, but Snyder’s passion for wanting everything to click into place often has him force readers to consider things like the Phantom Zone and the Speed Force as tangible things with real physics behind them. While doing this, he also asks us to try and understand how new things (in this case, a dark multiverse) exists alongside these established entities and … well, that’s when he throws in the Anti-Monitor Antenna and Nth Metal. It is one thing to make use of these tools through action, but a lot of what issue #3 does is use dialogue. It’s one thing to use baby Darkseid and magical BATMANIUM while also using action to move the plot along, but asking for pages and pages of everyone sitting down while these concepts are tossed about pushes things in a direction that is more meta than it is fun.

Also, is it weird to just see Plastic Man’s … uh … Egg … rolled/carried around the way it is? Anyway …

This issue deals a lot with Superman, which comes across as a bit of a surprise considering how Bat/Bruce centric this comic is, yet it feels right. If there is any one person in the multiverse who would go to any lengths to save Bruce, Clark is it. Unfortunately, getting Clark to and from where the story needs him to go requires him to encounter Barbatos’s Dark Knights. While I can buy Devastator as being a Superman level threat, Superman serves more as a torture-puppet for Barbatos.

Another side-note: Joker dragons? Yea, that was an image I didn’t need to see manifest into any reality. Yikes.

The best aspects of this issue come from Capullo’s art, which is a given, yet I feel like some key pieces are standouts that deserve attention. Capullo has always had, in my opinion, a very good grasp of getting faces to express certain ranges of emotions really, really well. This comic shows one panel where Clark hears Nightwing’s comments about the fate of the Teen Titans. Capullo’s rendering of Clark’s terror-slash-sadness is a powerful rendition of emotion that stands out as being one blow in a series of blows that Bruce encounters this issue. Another is Clarke’s hopeful expression as he proceeds through a convoluted method to reach where Bruce is being imprisoned. Capullo renders one of the most hopeful renditions of Superman I can recall, which leads to a particular sequence that some will either find positive or negative, depending on your view of certain comic story tropes.

In the imagery department, this issue fires on all cylinders as far as atmospheric, creepy content are concerned. Horrifying towers of corpses rising into the skies, bodies having been transformed, and beloved locations aflame. If you want devastation and decay, this issue has the while artistic team on display at their best.

While the pace slows to a crawl, this comic is still a kick to read and it promises even more intense things to come in the future.