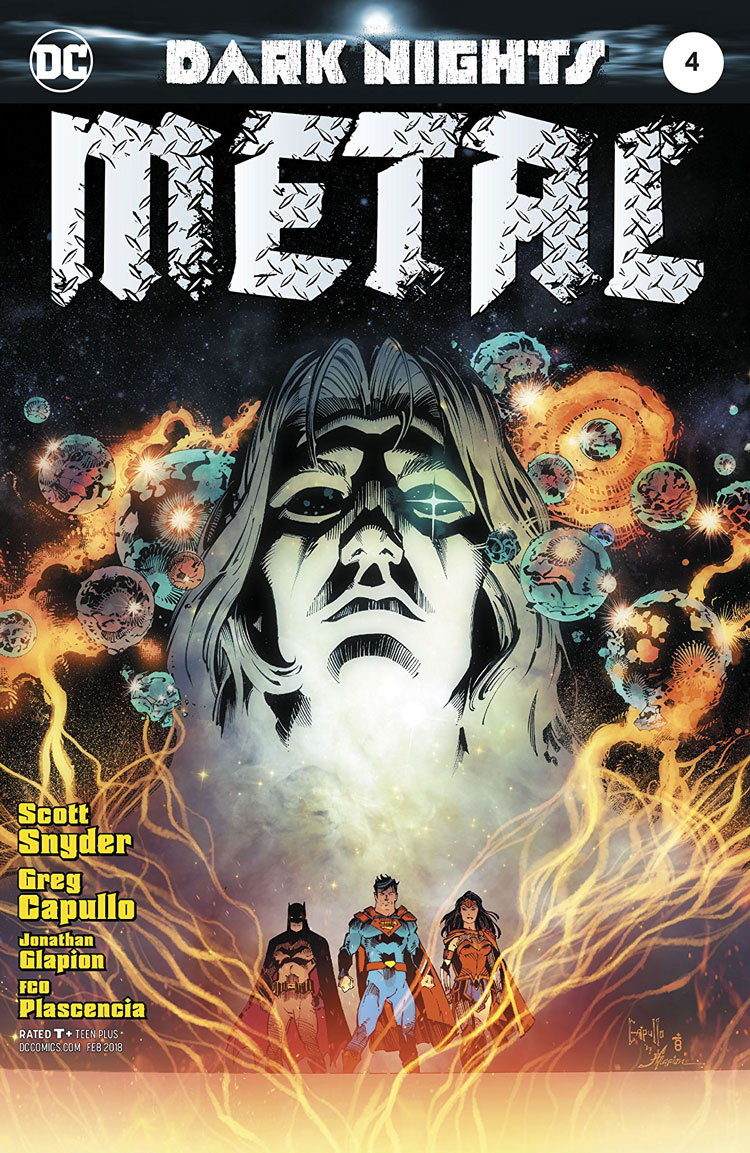 Batman and Superman have been duped! The Justice League is split across four corners of the Multiverse to collect the nth metal they need to beat the dragon. The Sandman is watching his library burn. The earth is sinking into darkness.

All I can hear is the screech of an electric guitar and the vibrations of a universe turned upside down.

The thing about event comics, especially ones at DC, is that they have been historically designed to fix things. From Crisis on Infinite Earths all the way to Final Crisis, the idea of the multiverse has been bandied about as a way to understand the DCU. To make it smaller, in a way.

Sure, at times, it felt like the possibilities coming out of any given summer crossover were endless, but there’s always been some kind of sense that in order for possibility to grow, one had to trample on, even discard the past. Throw away the things that don’t quite fit — or at the least, find a discreet home for them.

Nothing about that necessitates a bad story. In fact, I count some of my most beloved comics as either events themselves or the result of one. But the idea of a comic book event — a super-hero universe-spanning adventure — that would do the opposite, that would serve almost like an anti-Crisis, just hasn’t been as easy to come by.

And so, in looking at the kind of narrative Scott Snyder and Greg Capullo, already masters of the Bat-Realm, have manufactured for the multiverse as a whole — and beyond — it’s kind of awe-inspiring to say the least.

There’s literally every kind of story being crammed into this book, now in its fourth issue, overflowing at the gills with creativity and expansive vision. This is not a story about collapsing ideas, no matter what Barbatos is trying to accomplish with the Orrery of Worlds. No, this is a book where everything creators have dreamed for years is literally true and real, and then some.

It’s no accident this issue opens with Lucien’s Library of untold tales burning itself into infinity. Why should there be stories that aren’t told? Why can’t the Sandman rub shoulders with Batman and Superman? Why can’t blue, electric Superman be one of Clark’s nasty nightmare reflections (a bit I particularly love, by the way)? Why can’t Starro be a wise-cracking, giddy megalomaniac that can’t wait to go “Nyah Nyah” at the Green Lantern in front of him?

The balance of humor and seriousness, high adventure and intrigue and celestial awe is remarkable, as Snyder shifts footing from page to page to set a kind of roller coaster-style pacing. There’s no wasted moments, and Capullo and the rest of the art team make sure of that, keeping the flow of the book frenetic and active even in the rare talking heads moments.

A good deal of that is accomplished with panel breaking as very few word balloons stay in the space allotted. It’s a beautiful balance between Capullo’s sense of curve and billowing line and Wands’ balloon placement, making every scene feel a bit like it’s happening on the run.

But truly, the thing that just gets me is how utterly packed the book is, without feeling like anything is a wasted element. Scenes are tightly scripted, but Synder is treating us to a literal cornucopia of the DC Universe. So many elements that seem far apart in practice and yet suddenly feel more connected than ever.

And amid all of that, a new sense of cosmology begins to unfold, far from feeling like a simplification or condensation. It’s like watching a mythology start to develop on the page with some familiar elements, but far more not. And it takes me back to learning about the Greek or Egyptian Gods for the very first time. Except this is MY culture that is sprouting new gods. And I’m only beginning to see the connections.

Metal so far has proven itself to be a fun event, and no matter what grows out of it, I feel that will likely be its greatest legacy. There’s a lot of love flowing into these pages from Snyder and Capullo; Glapion, Plascencia, and Wands; and clearly from editors Rebecca Taylor and Dave Wielgosz as well. The moving parts in an epic like this are pretty substantial, but no one on board has forgotten to have a good time along the way. And that attitude is stunningly contagious.