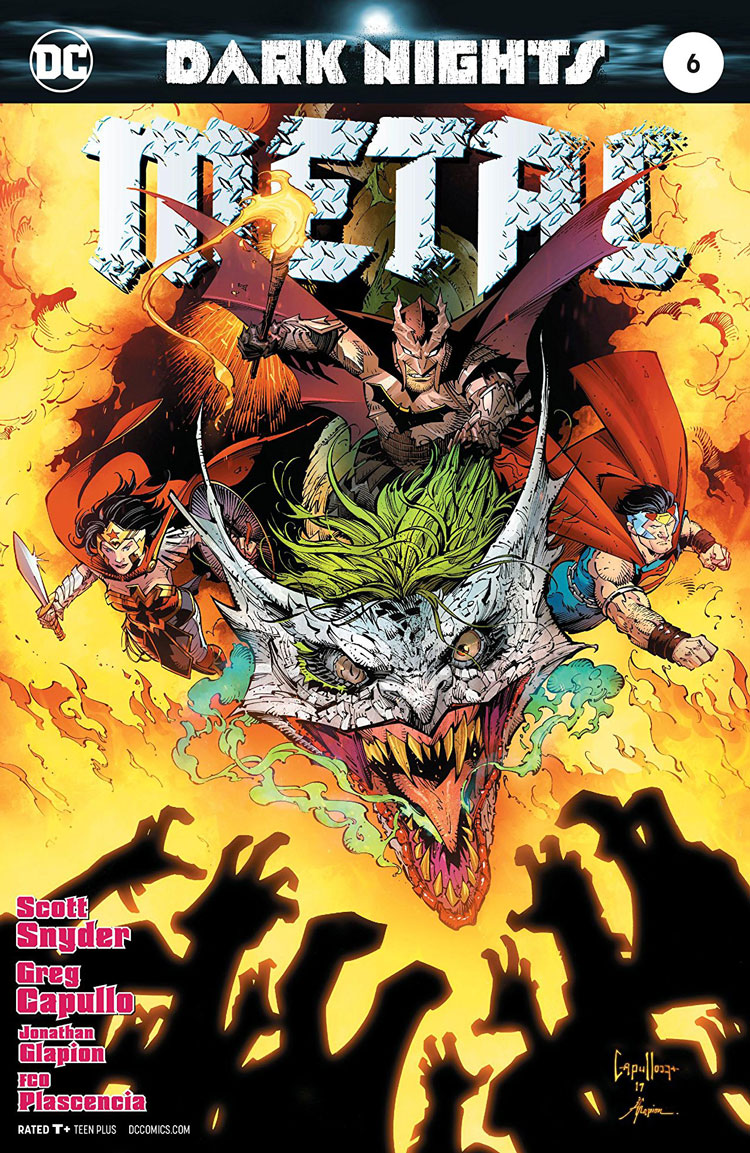 It is hard to fathom that Dark Nights: Metal #1 was released back in August of 2017. The landscape of what Snyder was showing us then, as opposed to what he reveals to us now, is really hard to wrap my head around.

But in the end? It all seems to work, even if the insanity level gets too high and the pacing cuts some things short. What matters, ultimately, is if the Dark Nights: Metal series stands as a good story on its own and if it helps DC Comics keep momentum going as they push their characters into new territory. For the most part, the answer to both these is yes.

I am not sure of things can be any more extreme by the start of the issue: Barbatos seems to have plunged the Earth deep into the Darkness, the revived Monitor (!) in in the clutches of The Bat Who Laughs, and Clark and Bruce are both gone.

Snyder, who has never actually written a Wonder Woman series, manages to find the heart of Diana’s character as she, along with Hawkgirl, work together to pull everyone’s butts out of the fire. Diana’s fearless dive into possible oblivion, tethered only to her lasso, makes for one of the more stand-out moments she has been charged with in any comic for a long, long time. While Aquaman, Green Lantern, and Flash just sort of hang back and fight wave after wave of nightmare entities, it is ultimately Wonder Woman and Batman who get stuff done.

Even in this double-sized finale issue, there just only seems to be so much space that Snyder can hand off to so many characters. What is particularly weird is Plastic Man, a character who seemed to be so critically important (they carried his egg around for how many issues?). Does he do anything? Yea! Is it it cool? Yea! Should it have probably mattered more? Seems like it. If there is one flaw with Metal #6 it would be that. A lot of cool things happen, but few things matter as much as X action or Y panel.

Ultimately, when you get to the end of the story, Metal #6 is about creativity and compassion winning out over fear and despair. While this might seem like a “been there, read that” sort of dynamic, Snyder rightfully gives his rendition of this classic set-up consequences. While I am sad to see it (appear) to go, there is a classic piece of Kirby mythos content which has long since perhaps overstayed its cryptic welcome. Snyder literally busts it down. That matters.

There are some classic old and new characters who are being set up to take a big stage in upcoming DC events and stories. That matters too, so long as DC keeps its momentum. I remember the end of the Brightest Day storyline and this looks/feels familiar, so I am a reader who is actively hoping for the best.

This feels like a comic that needed a Part 7, but the ending we got has done the job, albeit with some unanswered questions. How was Barbatos handled? He seems to have been contained off-panel. What happened to The Bat Who Laughs? He has a fateful encounter with a key character which, while AWESOME, leads to a stagnant resolution. You can see The Bat Who Laughs and this other character making their last appearance in a panel, but … is that it? Here’s hoping Snyder has something ready for all of these questions, because some of them are rather urgent, such as what happened to the Anti-Monitor’s freak’n brain?

Capullo’s striking ability to render heroic action and dynamic posture is in rare form throughout the issue. Characters are frequently foregrounded as being in larger than life situations (which, for this comic, is saying something!) and their presentation is spot on. Plastic Man’s penultimate appearance is as bizarre and weird as you’d expect, which is a testament to Capullo’s ability to render the weird as well as the wonderful.

Fortunately, he also delivers the nightmarish. The various depictions of a Darkness dimensions are of chaotic and hopeless as can be imagined through his lines and paneling. Metal #6 stands as much on Glapion’s inks as Capullo’s art. In fact, there are also numerous panels towards the end where the contrast between whites, blacks and silvers truly pops out as being something special. The combination of Capullo, Glapion and Plascenia come together to form a kind of “dynamic trio” who represent some of the best DC Comics works with.

The final few pages of this comic hint at bigger things to come within the DC Universe, and I for one hope they come to fruition. The struggle and importance of the Metal storyline seems as much a lover-letter to Morrison and Crisis as it is Snyder’s own magnum opus to usher DC into a new phase of life. He succeeds.

Metal is a great series which delivers on folding Batman into the greater Crisis-based stories of the past, while also making his previous works worth a re-exploration in the process. While I stand by my earlier assessment that this story needed more space (no real conclusions to the Dark Knights of Barbatos? Pity!), what is present is great and this story deserves to be read by fans of DC Comics who have a vested interest in seeing how their star characters will evolve and grow under new, exciting conditions.