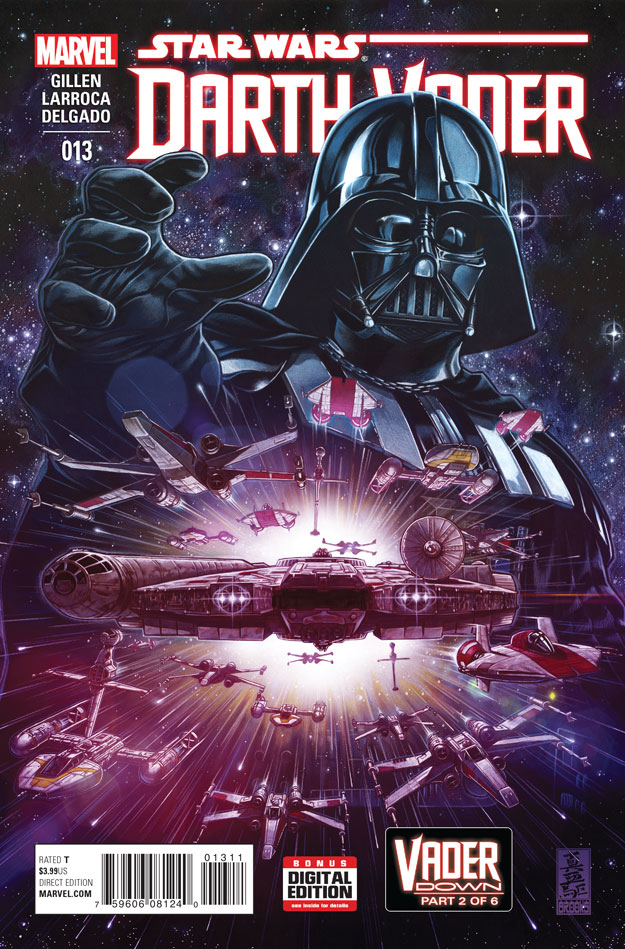 Vader Down continues with the regular Darth Vader creative team and this comic is just so damn good.

Lord Badass…..rise. Jason Aaron and Mike Deodato opened up this crossover by showing Darth Vader carve through Rebel forces with ease. Kieron Gillen and Salvador Larroca carry the torch that has been passed to them well, delivering a Vader who is a badass to say the least.

Gillen doesn’t just handle the Dark Lord well, but also the rest of the cast of “core” Rebels. Han has the appropriate levels of attitude and charm, Leia the proper determination in her voice and Luke is just the right amount of gullible considering how early we are in his story. All these Rebels are very new and while they are coming off of a major victory, they still lack the experience and cunning required to deal with the likes of Darth Vader. Gillen channels their dialogue and emotions nicely in this well paced script, and he and Jason Aaron certainly appear to be in sync with the tone of this crossover.

Salvador Larroca and Edgar Delgado bring a very “cinematic” feel to the visuals, with Larroca absolutely nailing some facial expressions from the films. His work with Leia, in particular, is strong in this issue and he and Gillen are definitely on the same page with the dialogue and body language that accompanies it. He delivers some jaw dropping images of the man of the hour, and his work is very sharp on the whole in this issue. Edgar Delgado’s colour work brings the tone of the issue in line with Frank Martin Jr.’s work in Vader Down #1 and this issue fits the tone of this Vader Down crossover very nicely from a visual perspective. It’s a strong art team keeping pace with a well written script and the net result is a good comic.

Darth Vader #13 is a rock solid comic that I found to be quite entertaining. Gillen, Larroca and Delgado are a strong team when they are in sync like this and Vader Down is proving to be a lot of fun.