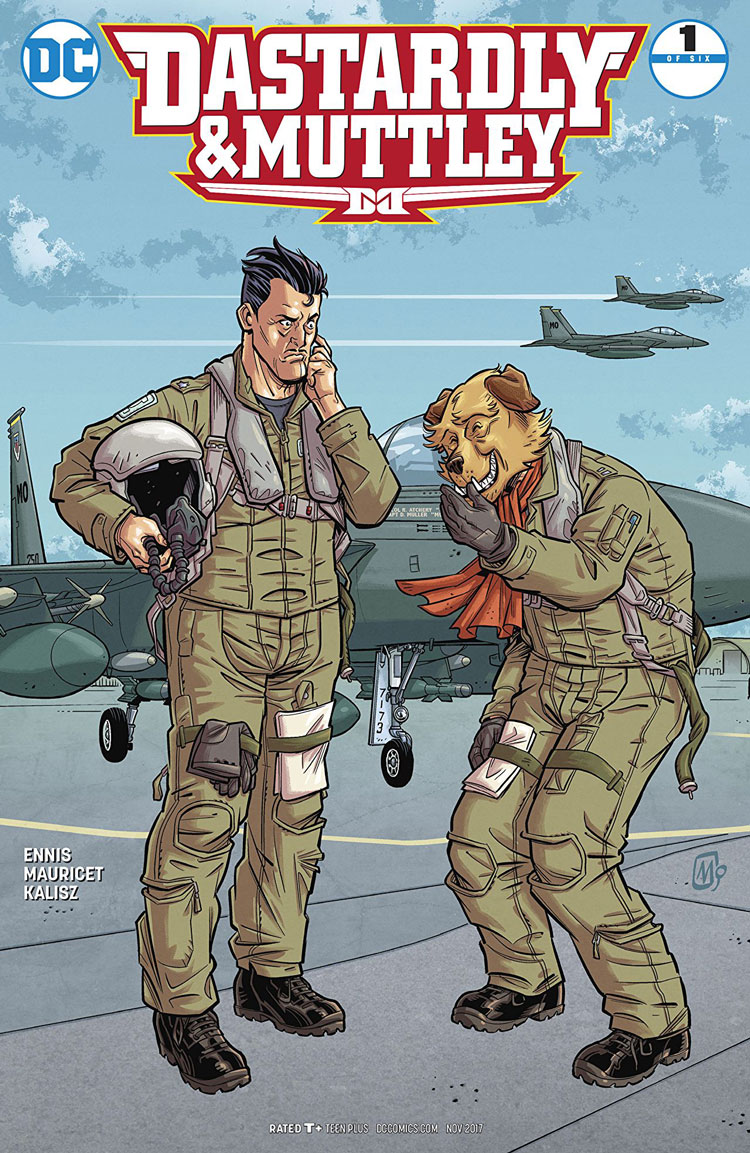 After a nuclear explosion, Colonel Richard “Dick” Atcherly and Captain Dudley “Mutt” Muller are dispatched to save the day. But when they fly onto the scene, strange metamophoses start taking place…

The comic opens on the nation of Unliklistan, which is beginning fission at a nuclear reactor fueled by the element Unstabilium 239. It goes poorly and the reactor explodes. Jump to five days later and Colonel Atcherly and Captain Muller are flying in to investigate both the explosion and the disappearance of a drone sent into the airspace earlier. They find the drone, which is spraying a mysterious gas from which boil cartoon punctuation marks and emoticons.

The gas causes strange, cartoonish mutations and changes in behavior, most notably Muller’s fusing with his dog to become a dog-human hybrid. (This might, perhaps, have been intended as a surprise twist, given that it’s built to as though it’s a shock and appears on the issue’s final splash page. Given that the dog-fusion Muller appears prominently on the cover, I don’t feel any particular qualms giving away that surprise).

This is a damned peculiar comic.

It’s not especially funny, there isn’t much realistic or engaging war fiction going on, and there’s an overwhelming sense of marking time with exposition rather than doing anything that might be entertaining. There certainly are attempts at humor, but they more or less all fall flat, particularly the first-page jokes about the geographically-nebulous but definitely Islamic nation of Unliklistan.

That early page borders on the offensive, and does so for no deeper a joke than “They’re Muslim!” That, in turn, lays the groundwork for the rest of the issue, which features some not-especially-funny banter between Atcherly and Muller, followed by an interrogation that’s trying really hard, but failing, to be wacky.

It’s a shame, because I like Garth Ennis, and I particularly enjoy his comedies. There’s not the wild inventiveness or sheer willingness to go all-out that we saw in, for instance, All-Star Section Eight. Instead, we have a comic that seems peculiarly focused on telling a story of how real-world pilots could wind up transformed into the cartoon villain duo Dastardly and Muttley, but does so by having a pilot bring his dog on a mission with him and encounter an emoji-spewing drone. It’s too goofy to take the story seriously, but isn’t goofy enough to be entertaining. It lands in an awkward No Man’s Land between realism and burlesque and winds up getting shot to pieces.

The art, however, is a high point. The facial expressions are appropriately exaggerated and cartoonish, pulling their weight in defining the characters in a way the dialog doesn’t. The icon-laden clouds are strikingly outlandish and do a fantastic job selling the transition from realism to cartoonishness. That blend of real and cartoon works particularly effectively in the cockpit scene, where Muller has a somewhat grotesque vision problem and Atcherly’s controls turn into bright children’s toys.

The best parts of this comic are those where the wacky high-concept is allowed to run rampant, and there’s at least the promise that, with exposition now handled, future issues may feature a more favorable balance of somber-to-slapstick.

There’s potential here. It’s an amusing premise and it could go somewhere fun in future issues, but this first issue has almost nothing to recommend it except for fun art and exposition that will set up future, hopefully better issues.