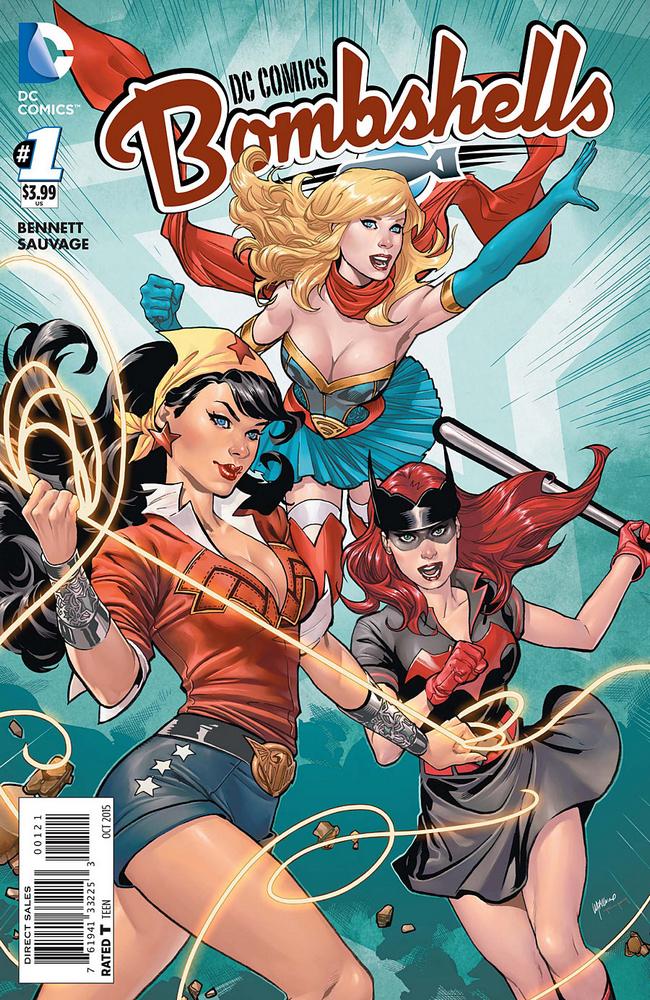 The year is 1940. The world is at war. Troubling times hit America and our allies and enemies abroad in equal measure. Who will rise up to save us when the chips are down and the Nazis invade? Nope. Guess again.

It’s been a very long time since DC Comics had a comic book series set in (or that even referenced) World War II, but for decades, it was the go-to era for tales of soldiering and super-heroics alike. As the foundation for all its major characters, the late 1930s and early 1940s is a Rosetta Stone for the company that forms the foundation for much of its past success.

So, it’s nice — and a tad symbolic — to see it now being used to represent its future.

What Bombshells (among other titles produced in the most recent wave of launches at DC) represents is a concerted effort to make comics for everyone. And I mean everyone. With 47% of the buying audience for American comic books reported to be female, we’re naturally seeing a lot more diversification of material available across the comics market as a whole. But at DC, we’re seeing that effort organized in a variety of ways — Bombshells being one example of how awesome the results can be when you put your mind to developing something special.

Because on the face of it, Bombshells is a dramatization of a series of statues featuring DC Comics heroines in classic pin-up style looks, clothing, and environment. Sure enough, the statues sell, so why not make a comic? But putting this creative team on the title has infused a statue line (and, to be fair, a series of successful variant covers as well) with brilliant characterization, unique design, and an environment that holds so much potential for depth. Marguerite Bennett and Marguerite Sauvage aren’t just creating a knock-off tie-in.

This is a world. And it’s one I want to be in for a long, long time.

Bennett kicks off the first three chapters included in Bombshells #1 with yet another enormous gift for LGBT fans this year: a heroic lesbian couple in the year 1940. Batwoman, reimagined as an “A League of Their Own” style ballplayer in the male-deficient war era, is every bit the hard-edged and smart character she is in 2015. And seeing her interact with Maggie Sawyer, share background photos with Renee Montoya, and ultimately come face-to-face with one of DC’s best known heroines of color, is all just more than I could have hoped for in this title.

The characters across the board are fresh and funny, feel of the era but not overly weighted down by male chauvinism. In fact, all three brief introductions of Batwoman, Wonder Woman, and Supergirl/Stargirl, feature huge casts of women with nary a man to challenge their ability to kick ass, stateside or abroad. And setting the book in a World War II setting has certainly given Bennett lots of opportunity to make this universe feel holistic and… dare I say, organic to the women on these pages. Batwoman is not part of the Batman family. Supergirl is not anyone’s cousin. They are THE heroes. And it feels so great.

And the art Sauvage is rolling out page after page in this introductory issue is simply perfect. It captures the nostalgia for this age none of its readers likely experienced first hand — which offers far more opportunities than challenges in my opinion — and plays with both the fashion and the architecture in sublime detail. When Wonder Woman courses across the sky, you can hear Wagner in the background, pounding at your eardrums. When Kate and Maggie wake to hear a plane land, you can feel the summer air in the city as they climb the fire escape.

It’s a stunning presentation, but one with emotes as much as it denotes, and in far less lines than you might think possible. This is one of those instances where I’m not missing the thorough background detail, because the beauty of simplicity in character work across all three chapters holds my interest and sets the tone so well on its own. There’s no question what’s important on Sauvage’s pages, and it’s the lives of these women we’re about to go on a grand adventure with.