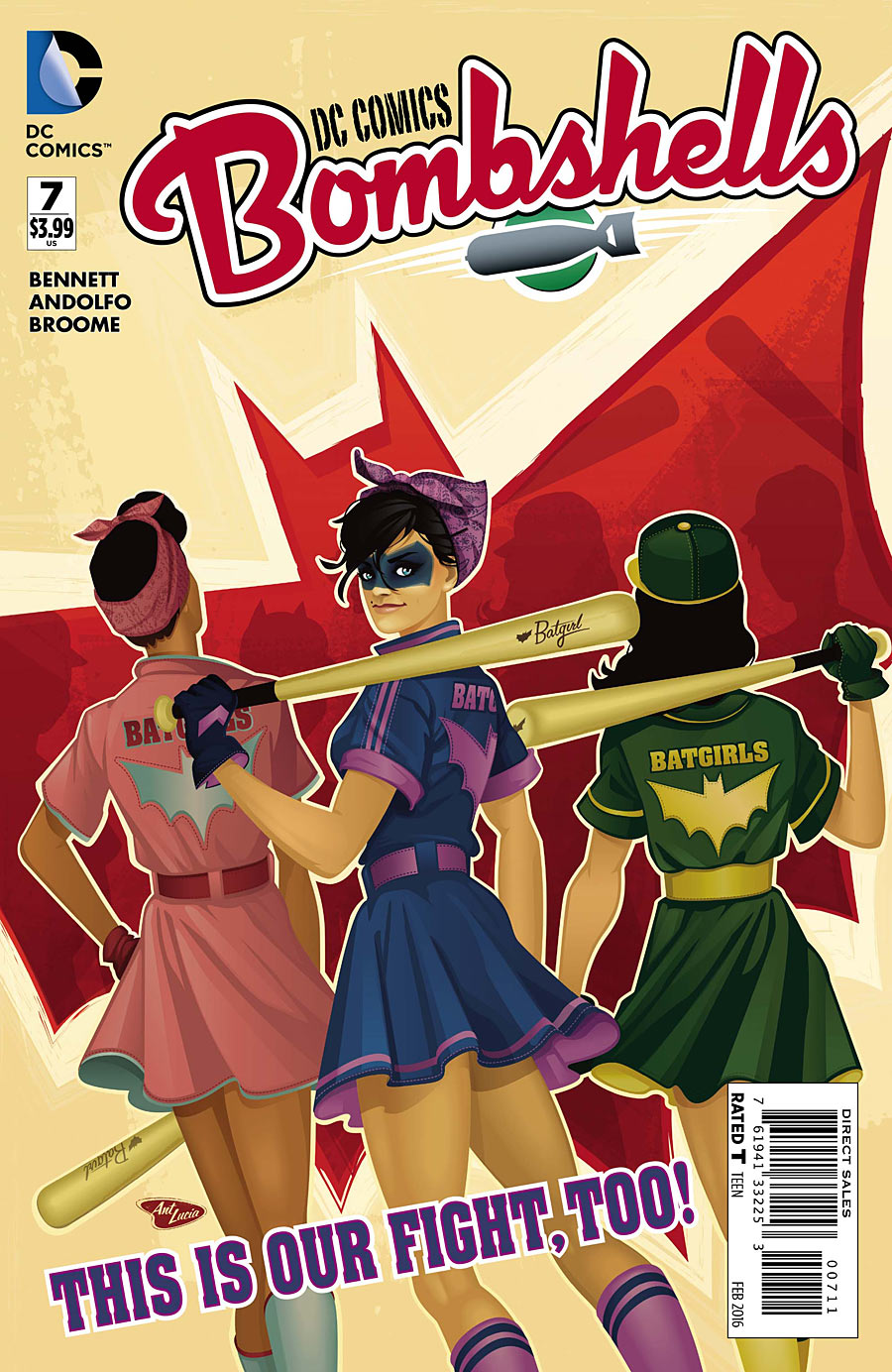 On the eve of World War II, Jewish refugees (what few have made it into the country) are turned out left and right in Gotham City. Now, it’s up to the Kane family and this grassroots movement called the Batgirls to protect those facing the bootheel of American xenophobia.

Production turnaround on DC Comics Bombshells must be damn tight, because if there was ever a comic we needed at the tail end of 2015, it’s this one. With as clear as it’s become that America is on the verge of repeating all the same mistakes it made in the 1940s, this comic set in that era — albeit alt universe — makes it all the more. With issue #7, Marguerite Bennett delivers a direct indictment of prevalent and institutional xenophobia experienced by refugees (here by Jews, today by Muslims) cascading in a feminist adventure story, featuring some of DC’s long lost Batgirls (and boys!).

So, basically, everything I think we need right this minute.

Pulling together the trio of Harper Row (modern Batman), Nell Little (Pre-Flashpoint Batgirl), and Kathy Duquesne (Batman: The Animated Series) — reimagined for the 1940s — Bennett quickly expands the team to include Alysia Yeoh (modern Batgirl), Bette Kane (late Golden Age Batman), Cullen Row, Tim Drake, and, most lovingly, Felicity Smoak (Arrow). It’s a beautifully eclectic ode to the history of Batgirls (and Batboys, for that matter) without pulling in the three major women who have worn the hood in modern times. And in some ways, it reshifts the relationship of admiration from Babs Gordon to Kate Kane, this universe’s preeminent super-hero, in a way that makes sense and doesn’t diminish the future roles of those larger characters. We get a very diverse group of individuals, representing Black, Asian, Jewish, transgender, and gay backgrounds, predominantly (but not exclusively) female, and each bring to bear something special from their identities that reinforces my sense that, yes, race, gender, and sexuality matter in storytelling. It all matters.

The sense of positivity these women have in the face of some truly awful treatment of the downtrodden in a time of war harkens back to Golden Age tales of socialist Superman protecting the weak and Captain America punching out Hitler, without feeling out-of-date for a modern audience. In fact, that positivity is probably issue #7’s finest achievement — although we see it throughout the series consistently — as a reminder that no matter what we’re facing culturally (and wow, this has been one doozy of a year for that struggle), doing so with our spirits raised is what will keep us going and growing.

It’s also a special treat to have a single artist in Mirka Andolfo pencil and ink the entire issue, originally presented as three weekly digital chapters. I have come to appreciate the divergent styles of different character focuses, particularly as they represent key media styles of the era itself, but having them jumbled in one paper package has always raised a hair on the back of my neck. Andolfo’s lines are strong and her narration carries the action well, but the real place her work shines is in the pure joy of faces.

Alysia’s smile, Bette’s smirk, the evil grimace of Headmistress Webb (yes, they pulled in ALL the Batwomen) — all add moments of fun and flavor that keep the book feeling light amid some very pointed (and much needed) social commentary. Layer upon that the pastel-amid-shadow color work of Wendy Broome and you have a cohesive vision for the Batgirls from an all-female creative team. And what could be better than that?

If you haven’t picked up Bombshells yet, either in print or digital form (chapters 19-21), this is the story to dip your toe into. Self-contained, but super compelling, issue #7 expands out the universe of the statue line with the same vigor and grace Bennett has executed in every chapter previous. If there’s one book that nobody really asked for, but it turned out everybody should always have wanted, it’s this one. Because, as the cover says, this is our fight too! Let’s enjoy it along the way.