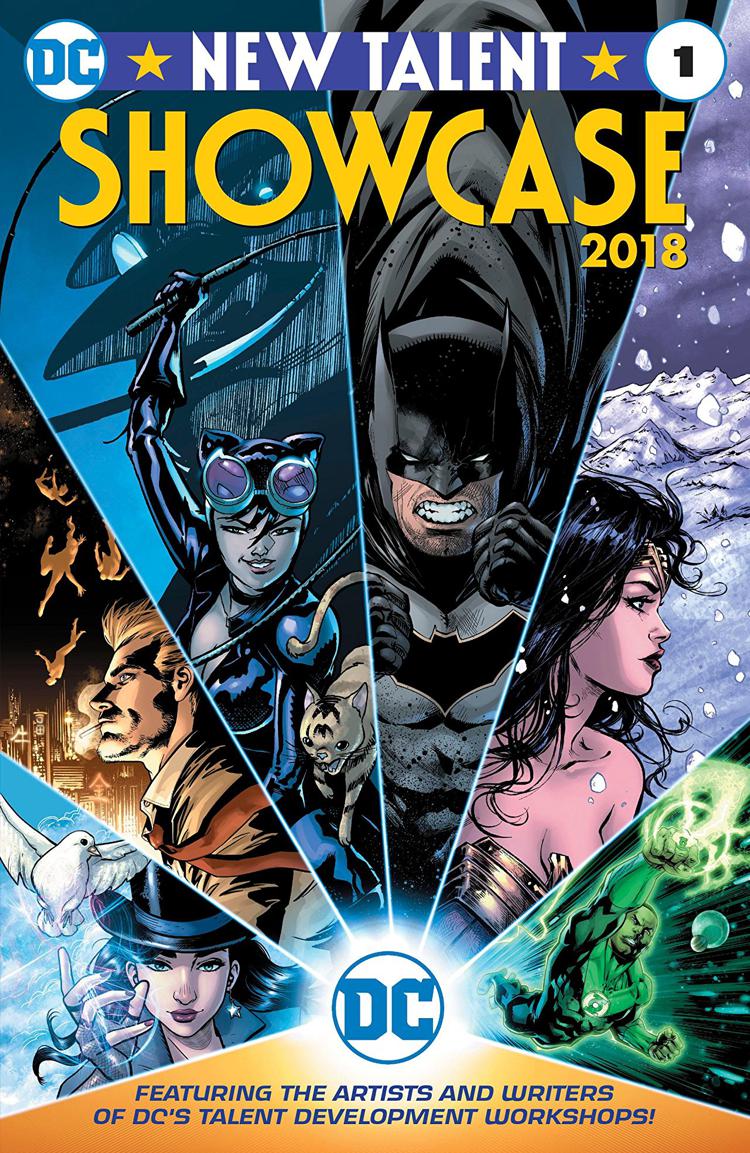 John Stewart: Where There’s A Will … (pg. 41-52)
Written by Robert Jeffrey II
Art by Max Raynor and John Kalisz

In order to best help readers assess the great stuff in this comic, I’ll be breaking everything down by the order in which each team is presented, starting with the trio of Johnson, Nahuelpan and Mulvihill. Johnson’s story, Batman: Leap of Faith, is actually the kind which I am not used to where Bruce is concerned since it is one where Bruce deals with the ramifications of failure, in a fashion. Johnson’s narrative is focused on the story unfolding before the readers, although a little build-up is brought in to set the scene: Batman is trying to prevent the murder of a senate candidate and her son by Victor Zsasz. Bruce, having failed to stop Zsasz in the past from having murdered the candidate’s husband, obviously wants to make sure he does not fail again. The story is tight, the aspects of how and why the senator want what she does is reasonable, and even Batman’s concerns over having failed in the past ring true to his character. Johnson nails the concern Batman has for life at the sake of what he risks to his own, however this story raises the stakes because he is also open to risking something (arguably) greater than “just” his life. Check out the story to find out what!

The duo of Nahuelpan and Mulvihill bring an expertly polished feel to this story, with fantastic depth of field, facial expression, detail and also a great ‘sense’ for dynamic movement in diverse scenarios. For example, during a sequence in an airplane, the pencil work flows well between panels and across the page. From batarangs being thrown to bodies falling through the air, the art is fantastic and compliments the constant tension of Johnson’s plot. The Verdict for Batman: Leap of Faith is 10 out of 10. It is actually one of the better Bat stories I have come across this year and the package of this plot plus this art seals the deal. Great work.

Anwar’s Constantine: Neon Demons is a fantastic build up which establishes how much they’re capable of world-building in a short amount of pages, but the ultimate showdown is a smidge lackluster. Anwar establishes a Hong Kong setting on the eve of the Hungry Ghosts festival in which a skyscraper is haunted. This is a great set-piece for John’s abilities and, for the most part, it works well. Constantine is brought into a scenario where he has to acknowledge his past failings with Astra while still going through with the work he was hired for. Anwar’s story establishes a lot: a backstory for the ghost, the history of the haunted building, the setting of the festival, the motives and concerns of John, two antagonists and more. Anwar pushes the envelope on telling a 24+ page story in half the space, but alas, the ending is short-changed. What should be a thrilling confrontation between John and a vengeful spirit comes down to a mulling over the technical loopholes of hauntings and technology, then poof. Conflict resolved. This reader can’t tell if that sort of ending fits a Constantine story or not, but you should read it regardless as a master-class in editing and pacing regardless of this reader’s quibble with the ending.

The fantastic counterpoint to Anwar’s story is the rich work of Petraites and Rauch. Rauch drowns the great linework of Petraites in intoxicating colors with a warm range. The panels are electric with vibrant tones and deep blacks, which compliment the design choices for the pencils. Panels are packed with dense, richly illustrated material, from kitchen scenes to panels depicting the tops of skyscrapers. This pair has a great sense of synergy for what makes Anwar’s story “pop.” The Verdict for Constantine: Neon Demons is 8 out of 10. This story makes me want to pick up Constantine again after years and years of having stalled on it.

The third story in is from DC stand-out Joey Esposito! This piece, “Catwoman: Pedigree,” is (weirdly) a story as much about Damian Wayne and it is Selena Kyle in that both characters become involved in a plot which involves saving captured animals, although Selena is the one narrating the plot. Esposito crafts a great story that manages to capture the hearts of both Selena and Damian. Esposito’s Selena is as much a rogue who wants freedom as she also is somebody who is at heart, despite her past, a good person. Selena struggles with the desire to be both part of the Wayne family and a free spirit, soaring around at night and getting into trouble. I love pairing Selena and Damian because each brings a glimpse into the nature of the other in ways I appreciated, from Selena seeing Damian as Pinocchio to Damian’s love for a housecat.

The power of this story comes from the action as Selena and Damian’s rescue operation involves tackling the Penguin in his own lounge. From whip-cracks to batarangs, the pencil work of Dominike “Domo” Stanton and Marissa Louise are on fire. While the overall linework of Stanton is good, the few flaws I could manage to observe upon a third read-through were minimal in nature because of the great colors. Louise gets to play with a lot of blacks, purples, grays and blues, but they all are highlighted well throughout. Catwoman’s costume never vanishes into the darkness thanks to great highlights and all the subtle colors in the panels, from van taillights to Damian’s cape, shine through. The Verdict for Catwoman: Pedigree is 9 out of 10.

The story marking the mid-way point is “John Stewart: Where There’s A Will …,” a piece which is a little short on narrative depth, yet which blazes with genuine love and probably the most “truth” of all the pieces in this collection. The main story is John Stewart moving to liberate the planet of Talie from the yellow lantern Karu-Sil. Jeffrey II’s surface plot, the enslavement of Talie, is the vehicle for something deeper, that being Stewart’s relationship to his mother and to the BLM movement. I could gush on about the fact that perhaps this story needed a stronger link to the family dynamic than the Talie dynamic, the last panel patched up my concerns. Besides, with a predatory lantern Karu-Sil in the picture, that means the team of Raynor and Kalisz will have exciting creatures to present.

While the actual presentation of action sequences in this comic are not as high as one might expect, Raynor and Kalisz do their best to present Stewart and Karu-Sil as the action stars they are. K-Sil’s yellow constructs are presented by Raynor’s pencils with the same fierce natures as their creator while having Stewart in the comic means having great fun with straight lines and metal plates. While the art is not consistent throughout the whole comic, some close-up panels are fantastic, such as the Honor Guard Resistance hall panels at the start, or Stewart’s front porch. These two moments show some of the best work in the comic and they highlight what the A-game is for this artistic team together. The Verdict for John Stewart: Where There’s A Will … is 8 out of 10.

Cady brings the best story of the bunch in my opinion with “Zatanna: Sleight of Hand.” Considering this reviewer actually enjoyed all the stories in this showcase, I need to point out how well I felt Cady got Zatanna, both as a magician, as a hero, and as somebody who really does the unexpected while also delivering on the premise of the character. With Zatanna, you expect to be surprised, but it’s always fantastic when you’re surprised in ways you don’t expect, hence why I also appreciate the name of the story. Cady presents a world-traveling Zatanna who arrives in Italy to handle some of her father’s old business and winds up being put in an awkward position: how do you appease an audience of malevolent gods when the show you’re hired to do must end in a human sacrifice? I won’t spoil the ending, because seriously, come on (!), but believe me when I say it’s one of my favorite Zatanna moments. Ever. Cady’s great story is also fertile ground for Goodhart and Peter to show off some dark, almost traditionally gothic synergy.

Each comic in the showcase has a color palette and style which suits the story, obviously, but the pencils of Goodhart and the colors of Peter really bring out the ambiance of the Italian setting and in Zatanna’s showmanship. Goodhart aces Zatanna’s dynamic energy and movements with their pencil work, with one two-page spread being an obvious show-stopper. What helps the mood is Peter’s color work. The shadowed amphitheater of the dark gods is presented in a somewhat muted, but still rich, color scheme. Blacks are strong and the red and purple energies of Zatanna’s magic and the night mix well. My only issue would be the grey speech bubbles and white text for the demons, and the blue/pink and white combo for Zatanna, don’t work well, however this may just be the screen I am reading everything on not showing everything the best. Regardless, Zatanna: Sleight of Hand is a solid work with a Verdict of 10 out of 10 as a Zatanna story.

The final story is “Wonder Woman: The Secret of Greek Fire” by Visaggio with art by Aneke and Sotelo. Unfortunately, the story that Visaggio wants to tell is hampered in part by “how” it gets told. Visaggio thrusts readers into the middle of a conflict with no real establishing idea of “what” is going on. How did the MacGuffin object get where it is? What causes the conflict (in the woods?) that Diana is stopping? Why is Diana bringing an injured teenager with her to climb a mountain? This reviewer had far too many questions being asked at the start of the comic, but the ending was still great and the art from Aneke and Sotelo are beautiful. In particular what stands out is Sotelo’s amazing use of colors and shading. Aneke’s BEAUTIFUL hair designs are magnificently colored in rich detail, clothes have fantastic detail, and one sequence presented as a 13 panel grid is among my favorites of this whole book. The Verdict for Wonder Woman: The Secret of Greek Fire is 7 out of 10.